The European production of salt of all kinds - vacuum, rock mining and solar evaporation - and for all uses - chemical and food industries, direct human consumption, road salt - is estimated at 60 million tonnes per year, on average.

Of that volume, around 2.5-3 mln tonnes comprise sea salt, of which Spain is the biggest producer with an annual output of around 1 mln tonnes in an area that expands across some 8,500 hectares of salt flats. Within Europe, other major producing countries of sea salt are France, Italy and Greece.

In Spain, sea salt originates from either the Atlantic or the Mediterranean sea. While production in the Mediterranean coast takes place all the year round, giving a consistent and thick grain due to a higher concentration of salt in the water, that in the Atlantic coast - mainly located in the Cadiz region - only takes place during summer. It benefits from high temperatures and strong winds that help production to increase quicker while modelling a fine grain. The methodology overall has remained the same since Roman times, although techniques and machinery have had an unprecedenedt development to satisfy the demand of specific industries, such as chemicals. 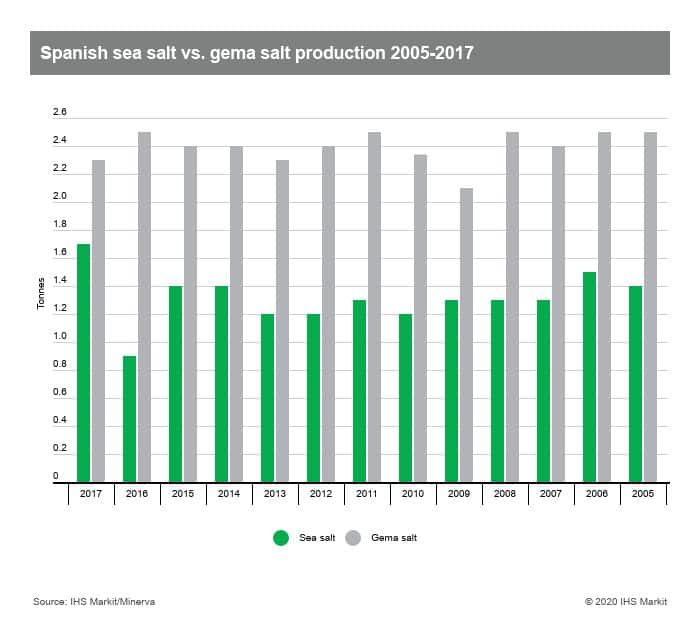 Salimar, the association of Spanish sea salt processors, was created in 2019, and is Europe's only organisation representing the sector today. Its members are five processors, some of them century-old family business, with an annual output of around 720,000 tonnes (72% of the total production) and revenue of EUR50 mln (USD60 mln).

In recent years, several small companies operating in natural salt flats, following artisanal methodology, have gradually disappeared because of the economies of large-scale production. "There are only a few remaining, but the Spanish industry mainly consists of larger companies that have been managing in a global and ever more aggressive competitive environment," Salimar's president Gonzalo Diaz Caicoya commented in this interview granted to IHS Markit.

Weather is a natural challenge for the sea salt industry. Last year's DANA storm hitting the Mediterranean coastal areas, where most of the salt flats are located in Spain, is a recent example. "Although we are regulated according to mining laws, in the end we are farmers growing a mineral that is edible. This is why weather is a challenge we are always ready to face, so if you have a production surplus one year, a common practice is to keep some for the next year just in case.

"Administrative processes such as coastal law regulations seizing land in the last 20 years or so in Spain, including a great proportion of salt flats surface previously designated as a protected natural area because of the natural ecosystem it helps to maintain, are the real threat of the sea salt industry.

"As these family owned companies are based in legacy continuity and require significant investments constantly for maintenance, the fact that the land is suddenly seized adds uncertainty and hampers the competitiveness of this strategic sector in the country," Caicoya believes, adding that Salimar is currently connected with European bodies to work out a remedy with this regard.

Although there is currently a salt surplus in Europe, sea salt production is following a different path.

"Sea salt is really becoming a high value-added product in the last three years because of the beneficial trace elements it contains and the ecological connotation of the natural manufacturing process it is involved in. Demand is significantly increasing in central and northern Europe."

"Logistic limitations for exporting salt, including sea salt, were huge because this is generally a cheap product: the average retail price in Spain for a packet - of sea salt - is EUR0.22. As it is now becoming a valuable product in central and north Europe overall - exports to the US recently started -, the price is not a limitation for exports any more, as it can reach a retail price of EUR0.88 per pack. There was also too much sea salt available in the market a few years ago, but that situation is changing now," Caicoya said.

Domestic consumption is also predicted to increase thanks to a wider knowledge of the product among consumers: "TV shows such as Master Chef have helped a lot to bring the product closer to the end-consumer," Caicoya added. "Also, there is less confusion among concepts such as 'refined' sea salt, referring to a natural salt which is sifted to obtain a smaller grain, as opposed to 'refined sugar' which involves a chemical process."

Sea salt innovation and product launches in retail during the last years are mainly related to packaging and formats, from fine sea salt to speciality products such as Flor de Sal - which literally translates to 'flower of salt' -, natural sea salt foam or sea salt flakes. But it is also an ingredient in other products such as chocolate or chips, in addition to traditional uses such as canned fish or cured meat.

Those companies which offer a less premium product are those mainly influenced by market fluctuations, whereas those competing in a higher added-value niche try to maintain stability prices.

"There might be an opportunity to sell salt at significant higher prices when it snows a lot in a country and demand suddenly escalates. I have seen bulks of quite standard quality salt at incredible prices in this kind of situation. However, if your business model is based on long-term contracts with customers, that might not be your niche then."

Since sea salt companies exist in Spain, many of them with more than 100 years in the market, salt consumption has been in constant change. "The fridge was invented and the industry obviously suffered, but soon new opportunities arrived, such as the food industry, glass manufacturing, water softeners, the chlorine, electrolysis, etc.

This industry is supported by so many legs that when a sector is in crisis, another one supports. In current Covid-19 context, the food processing industry has made us stronger supplying sea salt raw material, for instance. The peak supplying this industry is now," Salimar's president concluded.

Customs data also shows imports of salt for human consumption for the 2017 to 2019 period significantly increased to over 30,000 tonnes, with the main bulk from Tunisia. 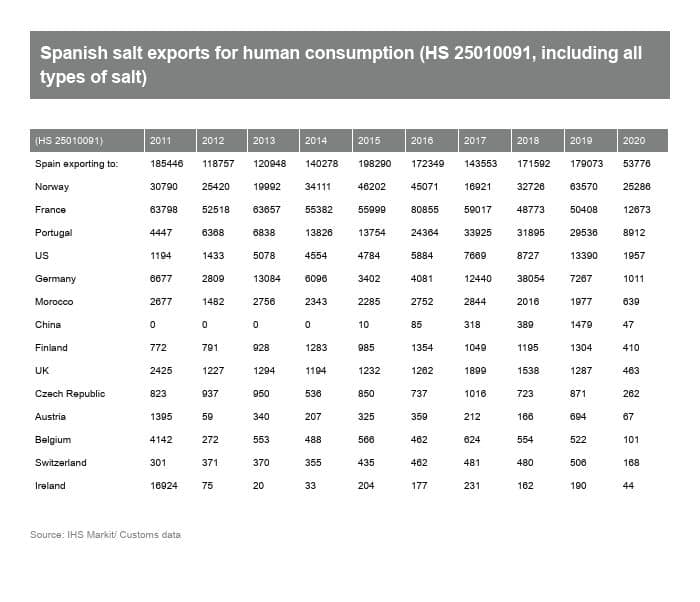 The European Commission presented to the expert group on organic production on 30 January 2019 and on 5 March 2019 a draft of the delegated act on production rules amending Regulation (EU) 2018/848 laying down the conditions under which 'sea salt and other salts for food' can be produced and labelled as organic.

The technical assessment will take place in the coming next months and will focus on production methods. 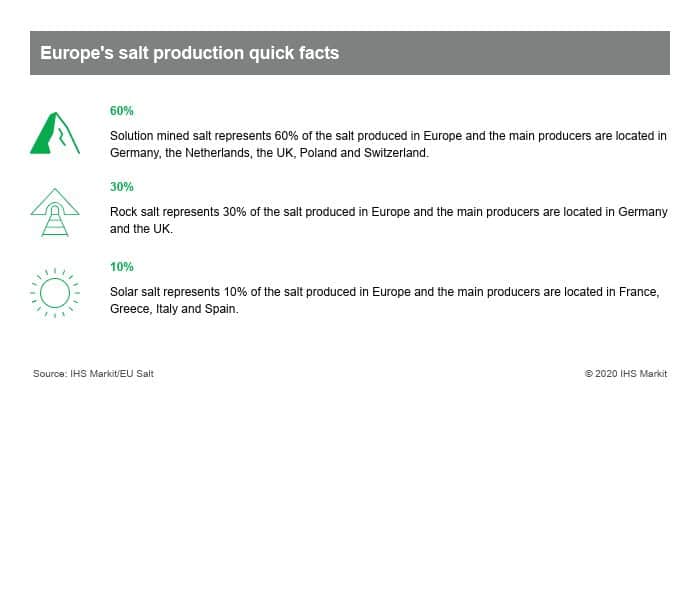