The supply-related constraints which have troubled global electronics producers since early last year were compounded as demand conditions in key industries deteriorated in July. New orders received by electronics producers fell at the fastest rate since mid-2020 amid reports of a blanket drop-off in demand from both large developed markets such as Europe and the US, to key manufacturing hubs in Asia such as China and Taiwan. Falling sales in key industries to electronics firms such as tech and autos add further woe to an already-beleaguered sector.

Proprietary supply shortages and price pressure indicators from S&P Global Market Intelligence's PMI surveys provide additional evidence of the still-significant shortages of semiconductors globally, and the sustained steep upward inflationary forces on prices for microchips which are squeezing profitability for companies reliant on chips. Although these pressures have eased off slightly, this is primarily attributable to slumping demand as global economic conditions turn worse. Waning demand for semiconductors bodes ill for tech stocks, while the Philadelphia semiconductor index, which covers the 30 biggest US firms involved in the manufacture, design and sale of the microchips, has undergone a steep decline so far this year. 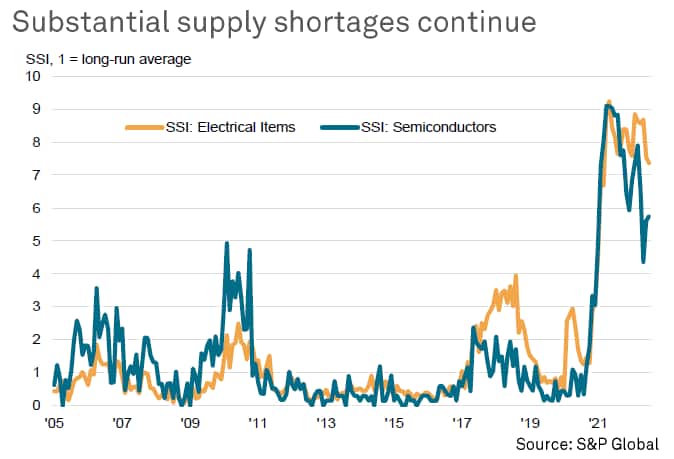 Although we've seen evidence that the supply crunch for electronic and electrical items has receded from its peaks last year, our proprietary data suggest that shortages are still running at significant levels (see chart). In July, shortages of semiconductors were around 6 times their long-run average. Fresh lockdowns in China and the subsequent disruption to ports in Shanghai has however recently exacerbated problems, with the measure creeping up.

As such, price pressures remain elevated, particularly when compared to the broader trend in the other items covered by our tracker (see this note here for more detail) . While price pressures in "all items" were around two times what would be considered "normal" levels, semiconductor prices are running at approximately 15 times their historical average. 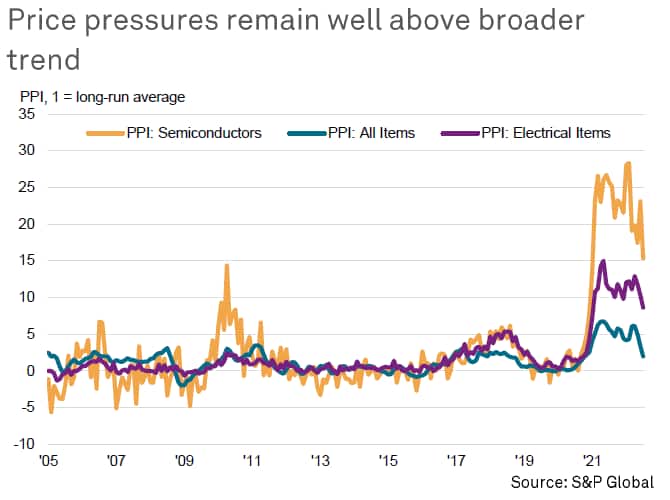 Sectors with strong links to the semiconductor industry such as Technology Equipment, Automobile & Auto Parts and general Electronics have seen their input costs soar and production capacities restricted. Aside from rates of increase seen since the pandemic, input costs at Technology Equipment and Electronics firms are rising quicker than at any other time seen in their respective series histories. 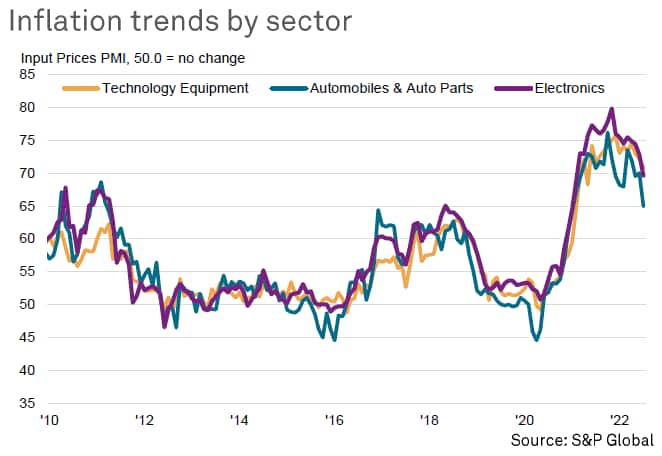 However, firms' ability to share the burden of higher costs with clients has been challenged by weakening global demand conditions, with July PMI survey data signalling that the first decline in demand for global manufactured goods since the initial COVID-19 lockdowns in the first half of 2020.

Sectors with a greater reliance on semiconductors, such as Technology Equipment, Automobiles & Auto Parts and Electronics, saw new orders fall during July, highlighting the additional difficulties these industries could face if the supply of semiconductors fails to improve and prices remain excessively high. Sales trends in each industry have undergone a significant slowdown from recent peaks in the middle of last year as the global economy rotated demand into goods, with high price levels and slowing global growth set to accelerate this trend further. Subsequently, the outlook for the semiconductor sector appears bleak. The Philadelphia semiconductor index, covering the 30 largest US companies involved in the production and sale of semiconductor products, has declined sharply in the year-to-date in line with the trend in our Global Electronics New Orders Index, while demand concerns are also weighing on wider tech stocks. 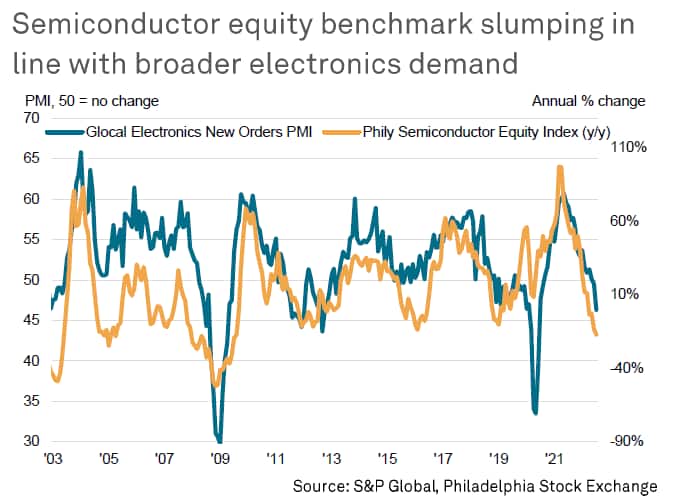 Nevertheless, the supply issues have spurred some action by policymakers to insulate their manufacturers from external shocks in the future. The US has signed a bill into law to support domestic semiconductor manufacturing, while other microchip makers are also reportedly planning big investments into US production. Other countries may also look at ways to re-shore supply chains in a bid to protect their industries from external shocks.