What is the future for plastics?

From Large Cap to All Cap: Introducing the S&P MidCap 400 ESG and S&P SmallCap 600 ESG Indices


What is the future for plastics?

Governments and the public at large are increasingly skeptical of many consumer plastic products due to the environmental impact of plastic.

Many major corporations have pledged to reduce the amount of single-use plastics in their products, in response to consumer preferences and new legislation. But it might be hard for the world economy to quit plastic, and companies are innovating new ways to recycle.

Despite broad public sentiment that plastic is harmful to the environment, it is proving hard for the global economy to quit producing new plastic products. Unlike other ecologically friendly practices, attempts to eliminate plastics have not been directly helpful to the bottom line of many consumer companies. S&P Global Ratings forecast that plastic packaging is unlikely to be replaced in the near future for many of its current uses, as plastic holds advantages over some alternative packaging options like paper or glass. Changes to plastic production are more likely, including a possible increase in the amount of recycled plastic over time.

Many major corporations — including American food giants like Coca-Cola, Walmart, Starbucks, and McDonald’s, and major European companies like Danone, Nestlé, and Pernod Ricard — have pledged to reduce the amount of single-use plastics in their products in response to consumer preferences and new legislation. These companies hope that environmentally conscious consumers will feel more comfortable purchasing their products when the offerings have a smaller environmental footprint. Some companies plan to switch to recyclable materials when they cannot entirely eliminate plastics and others have adopted new plastic policies, like eliminating plastic bags entirely, as they simultaneously make other changes to their products or supply chains. 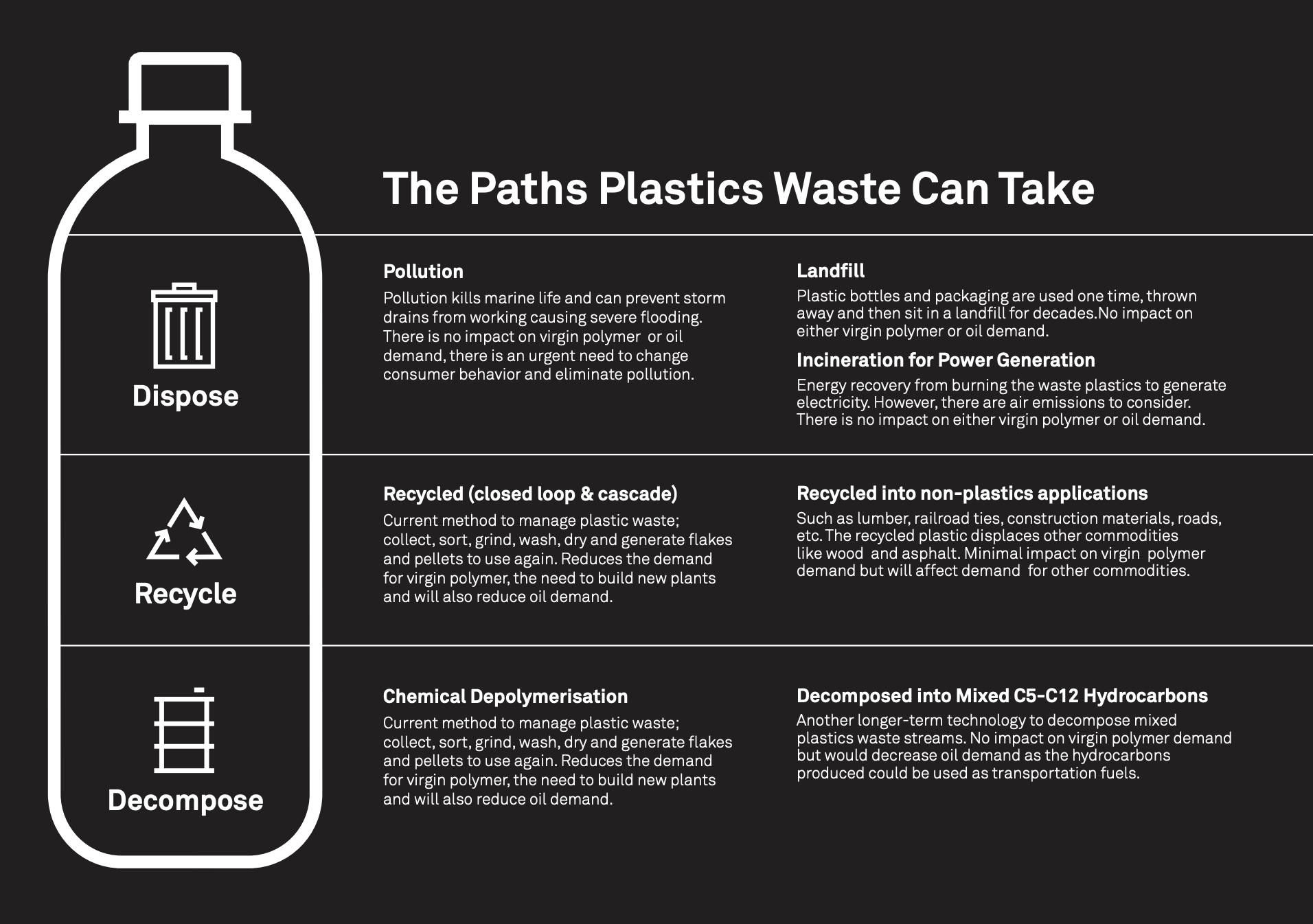 Hotel conglomerates have also tried to reduce their reliance on single-use plastics. MGM China, the Macau-based hotel and casino operator, announced intentions to replace all single-use plastics in its restaurants by the end of 2019. Marriott International and InterContinental Hotels, two of the largest chains in the world, announced in September 2019 that they would eliminate the small plastic bottles of shampoo, conditioner, body wash, and other toiletries that they currently provide to all guests. The hoteliers announced that dispensers stocked with the same products will replace the individual bottles in hotel bathrooms so that new plastic bottles do not need to be made for every customer.

Marriott said its move alone is expected to reduce the company's annual plastic usage by 30%, preventing 500 million bottles, or roughly 1.7 million pounds of plastic, from entering landfills each year. Although the chains hope that environmentally conscious travelers, especially at luxury hotels, will take note of these changes and choose hotels considering their response to environmental factors, they do not expect significant cost savings to come from the program. The effort to replace the small plastic bottles will require a more expensive upfront investment.

The most common plastic for recycling is polyethylene terephthalate (PET), which is commonly used in plastic bottles. Today, roughly 35% of PET bottles are recycled, and this share could rise up to 60% by 2030, according to S&P Global Platts, with half of PET recycled bottles being turned into new bottles. European countries tend to be ahead of the rest of the world in PET recycling efforts, and plastics companies there have proposed increasing the share of clear plastic bottles and single-polymer plastics to make recycling easier.

In connection with pollution and public concerns about the environmental impact of plastics, some jurisdictions have announced or passed stricter regulations. Seattle and Oakland, among other American cities, banned single-use plastic straws and utensils in 2018. Straws have been a particular target of these regulations, as people can often consume drinks, such as coffee, without straws. On the sovereign level, Canadian Prime Minister Justin Trudeau has announced a plan to ban some types of single-use plastics by 2021. Colombia halved the number of single-use plastic bags consumed at grocery stores within an 18-month period as the outlook for applications of plastics and petrochemicals there grows gloomier, and S&P Global Platts has reported that the country’s Ministry of Environmental Affairs is considering even further measures. 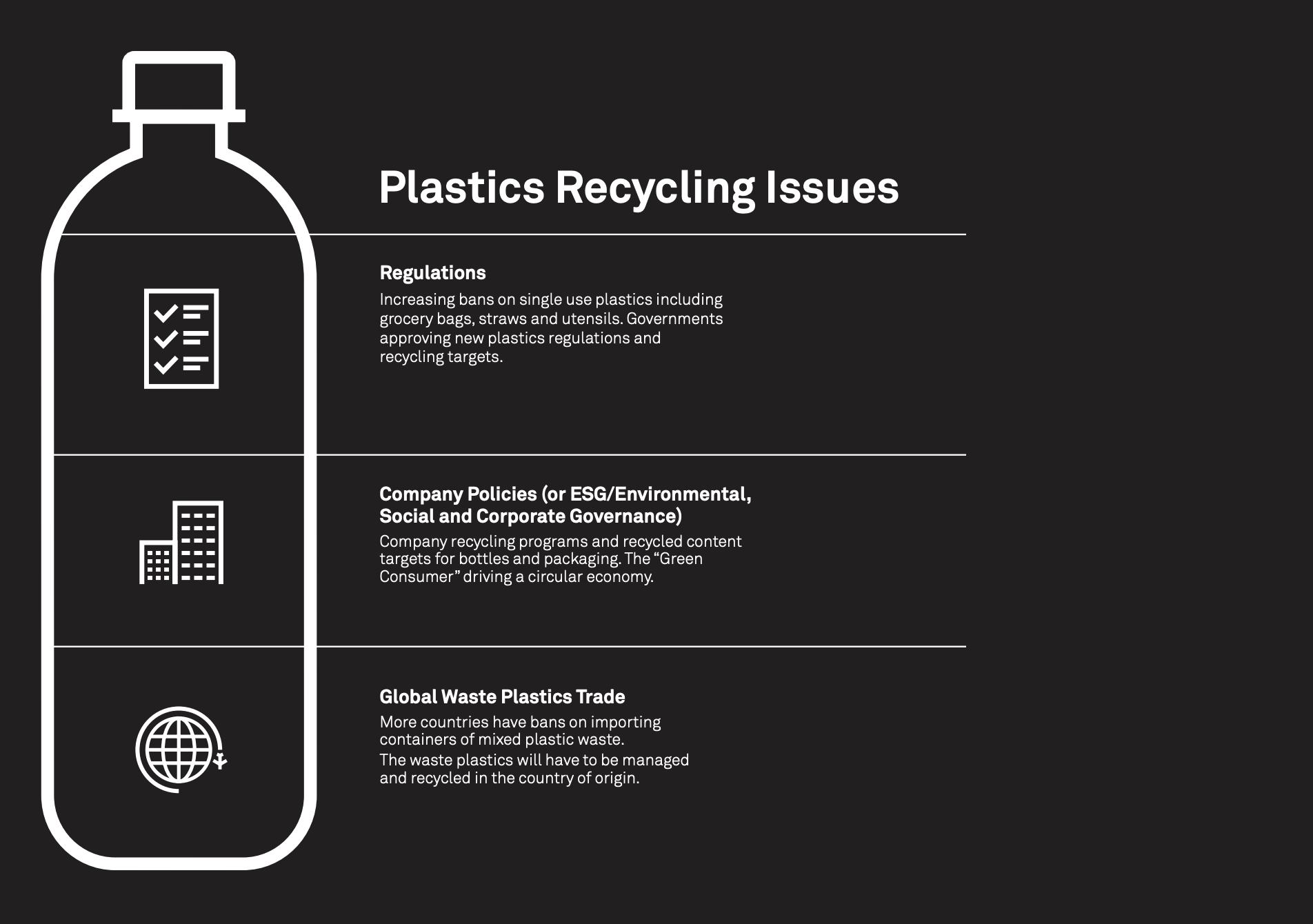 Additionally, the U.S. shale boom has been key to the economics of plastic recycling, and warns of one of the dangers of expanding plastic recycling. Shale drilling has led to a global oversupply of ethane feedstock, which lowered prices for new plastic dramatically in 2019. Before the market glut, prices for plastic flakes made from recycled plastic were actually cheaper than new plastic flakes. This created an economic incentive for European companies to meet the European Union’s goals of dramatically reducing new plastic consumption. Because of additional costs involved in plastic recycling, recycled flakes must be substantially cheaper than virgin plastic flakes to become economically competitive.

Companies have invested in expanding the capacity for plastics recycling, a potential sign that they expect greater demand. Dow announced in March 2019 that it plans to expand its business to supply 100,000 metric tonnes of recycled plastics by 2025. BP, the multinational oil company, is opening plants to research new ways to recycle types of PET that cannot currently be recycled, such as colored bottles and thick cafeteria trays. This increase in plastic recycling capacity is happening alongside growth in demand for all plastic products—plastics are expected to drive much of the future growth in the entire oil industry.

The exact share of plastics that come from recycled materials in the future is not certain, but S&P Global will continue its essential coverage and analysis of the industry. S&P Global offers the essential intelligence that investors need to analyze the ESG trends that could impact geographies and sectors like these to make decisions with confidence.

To learn more about ESG risks and opportunities, subscribe to our ESG InFocus newsletter