Beyond the worsening humanitarian crisis, the Russia-Ukraine military conflict could spur global food insecurity as trade flows of critical commodities face disruption and the prices of food products soar.

Agricultural commodities prices that had faced volatility through February as tensions in the region intensified have increased since the conflict began on Feb. 24. Both Russia and Ukraine account for a substantial amount of the world’s production and exports of wheat, corn, and sunflower and vegetable oils to Europe, the Middle East, North Africa, and South Asia. For example, Russia is the world’s longstanding leading producer and exporter of wheat, while Ukraine is the world’s top exporter of sunflower oil. Disruptions to their agriculture supply chains could have consequences for their countries and the global economy.

S&P Global Ratings foresees that the geopolitical shock of the Russia-Ukraine conflict could prompt sustained inflationary pressures across many countries, in part from higher food prices. As uncertainty prevails over the status of port closures and other blockages in the Black Sea and Sea of Azov, the prices of sunflower oil, corn, and wheat are likely to remain elevated in the near term—and any disruption to trade flows in the region could further affect food security and prices against a backdrop of inflation already having pushed food prices to record highs, according to S&P Global Commodity Insights.

“Ukraine is a significant agricultural producer. It is among the world’s top 10 exporters for 24 foodstuffs including seed oils, barley, wheat, pigs, poultry, and butter. And it is an important provider of food to emerging markets, which are often more sensitive to food prices and supply,” S&P Global Ratings said in a recent report on the macroeconomic and credit risks of the conflict. “Disruption to production and exports—particularly if Black Sea ports are shut down—could exacerbate food price inflation globally, adding to the energy price shock that is already weighing on disposable incomes.”

Current conditions are straining Ukraine’s sunflower oil industry, which could see its next growing season threatened if the conflict continues, according to S&P Global Commodity Insights. Unable to secure Ukrainian sunflower oil, Indian buyers are instead importing crude palm oil from Malaysia to meet demand before the month-long Ramadan holiday that begins in April.

Concerns over stranded shipments and other potential disruptions to global supply sent wheat futures prices soaring on March 1. Asian buyers who typically import Ukrainian crops are turning to Australia’s wheat supply as a safe haven from the volatility of the crisis, while China could become a major buyer of Russia’s wheat as sanctions threaten the former Soviet superpower’s traditional flows to Europe.

“The Russian invasion is seen clouding the prospects of corn exports from the world's fourth largest corn exporter Ukraine in the marketing year 2021-22 (July-June), and at the same time is raising concerns over new crop planting, due in a month,” S&P Global Commodity Insights said in an analysis this week. “The timing of this coincides with the peak corn export season in Ukraine as its corn exports typically remain heavy through the spring into the early summer (March-May) … Though uncertainty remains over how the situation is going to evolve in Ukraine, export disruptions in the country could send buyers toward U.S. corn, the available option in the market, as the South American corn harvest is still a few months away.”

Today is Thursday, March 3, 2022, and here is today’s essential intelligence. 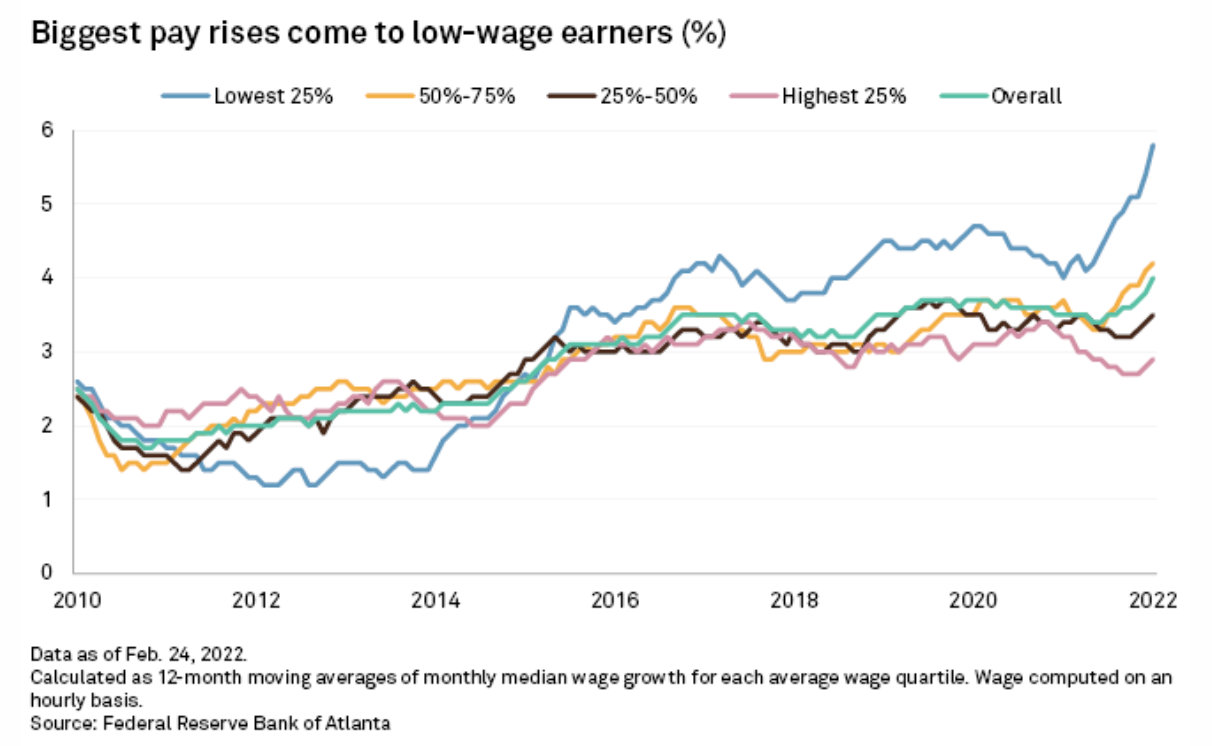 Rising inflation will slow down the ongoing U.S. consumer spending recovery in 2022, according to economists. Consumer spending is a key pillar of the U.S. economy, accounting for 68% of GDP. Personal consumption expenditure grew 7.9% in 2021, rebounding from pandemic lows. Economists anticipate spending growth to continue in 2022, but at a slower pace than in 2021. Oxford Economics forecasts 2022 consumption will grow 3.5%, while Wells Fargo expects spending to increase 2.8% this year. 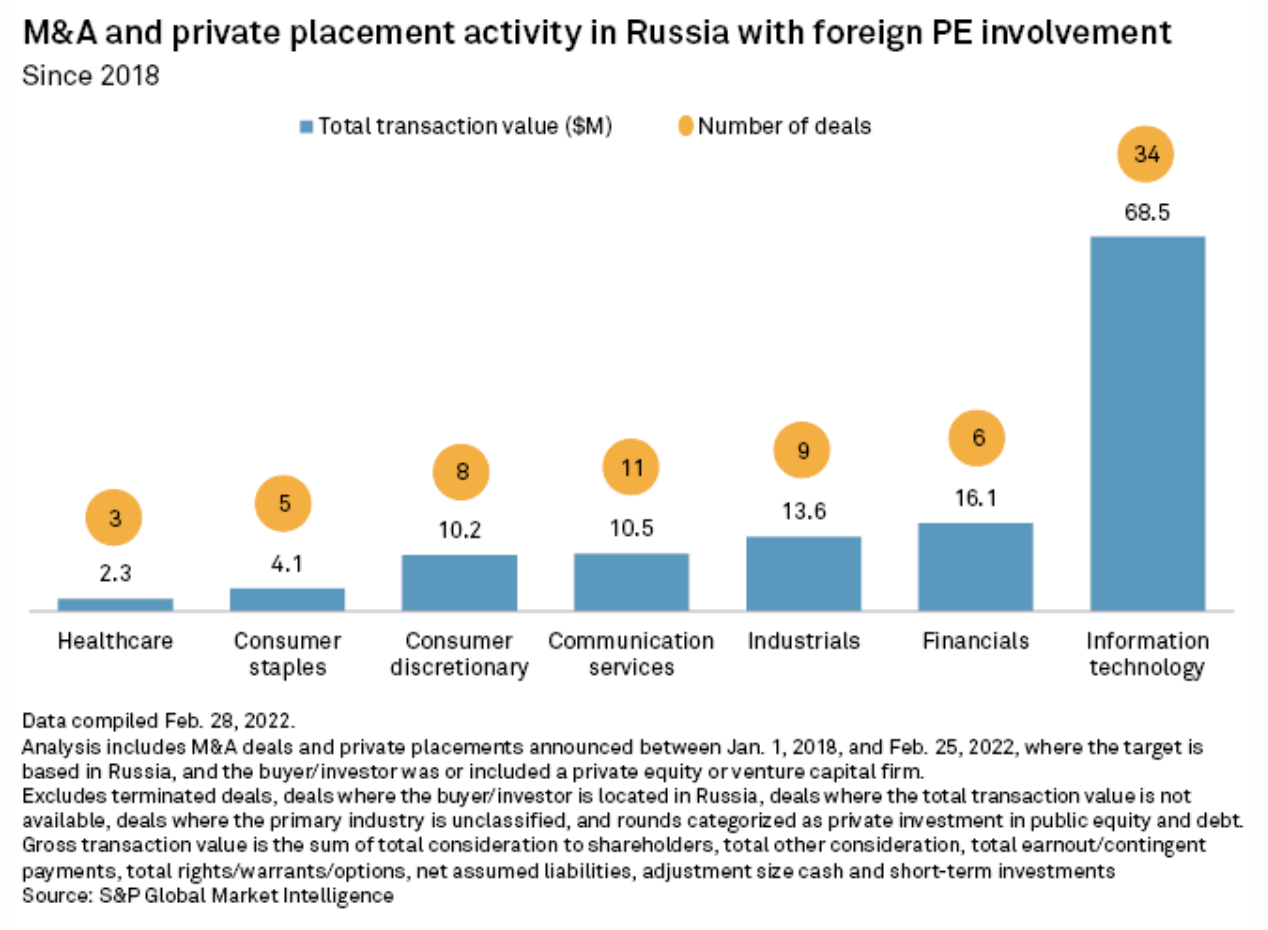 The full extent of Western economic sanctions on Russia after its Feb. 24 military invasion of Ukraine is still uncertain. But private equity and venture capital investments in Russia have already been impacted by restrictions imposed on Russia's banking system. Starta Ventures, a New York-based global venture capital firm with offices in Berlin and Moscow, has completed 17 deals in Russia since 2018, according to S&P Global Market Intelligence data. It works with technology company founders in both Ukraine and Russia that have incorporated their companies in the U.S., but many still have development teams in their home markets that may be cut off from cross-border payments, said Renat Khairullin, a program manager at Starta. 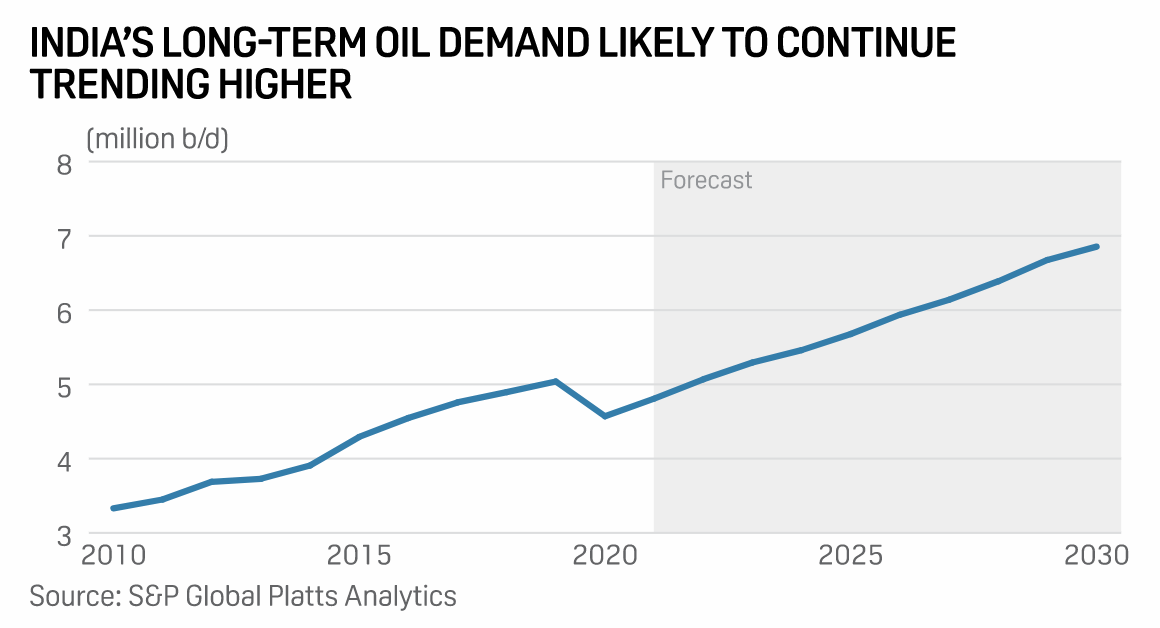 India's minimal dependence on Russian crude means that the South Asian oil buyer can weather any potential supply disruption from Russia, but surging oil prices are starting to put a huge amount of upward pressure on import bills and inflation. However, analysts said Indian buyers are increasingly becoming cautious about shipment logistics and delays of cargoes from the Black Sea region, which may prompt them to temporarily look for replacement cargoes from the Middle East.

Few Women At The Top In Global Metals, Mining Sector 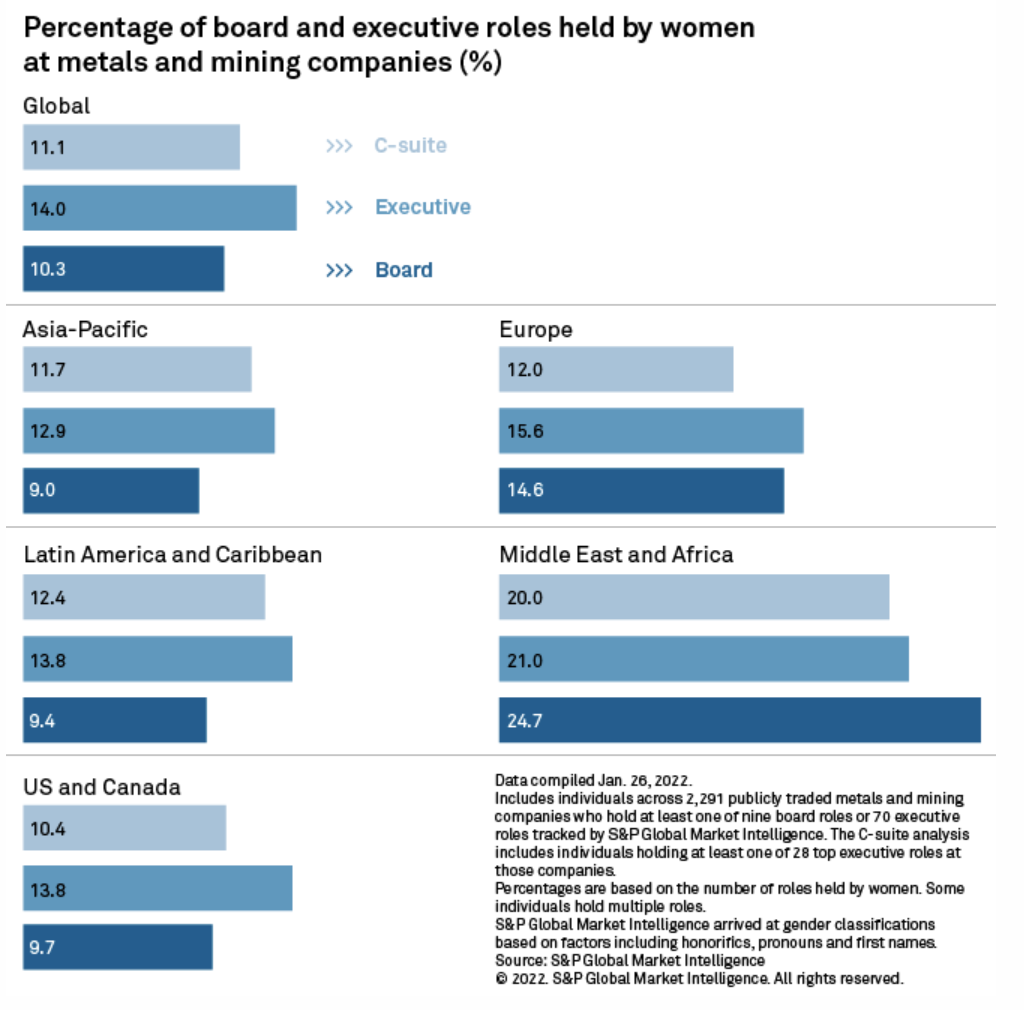 Women comprise a paltry share of top executives at global metals and mining companies, holding just 11.1% of C-suite positions, according to an analysis by S&P Global Market Intelligence. Despite diversification targets and other initiatives, women comprise just 14.0% and 10.3% of employees in broader executive roles and on company boards in the sector, respectively. However, several large companies say they are taking steps to address the gender gap.

Global crude benchmarks soared past the $100/b threshold March 1, while price discounts deepened for Russian oil, as traders sought alternative supplies amid Russia's military invasion of Ukraine. The Platts Dated Brent benchmark jumped $9.72 to be assessed at $112.92/b, while American GulfCoast Select climbed $6.96 to be assessed at $104.71/b, according to data from S&P Global Commodity Insights. However, the discount for Russian Urals crude continued to widen, with Rotterdam Urals assessed at an $18.31/b discount to Dated Brent. 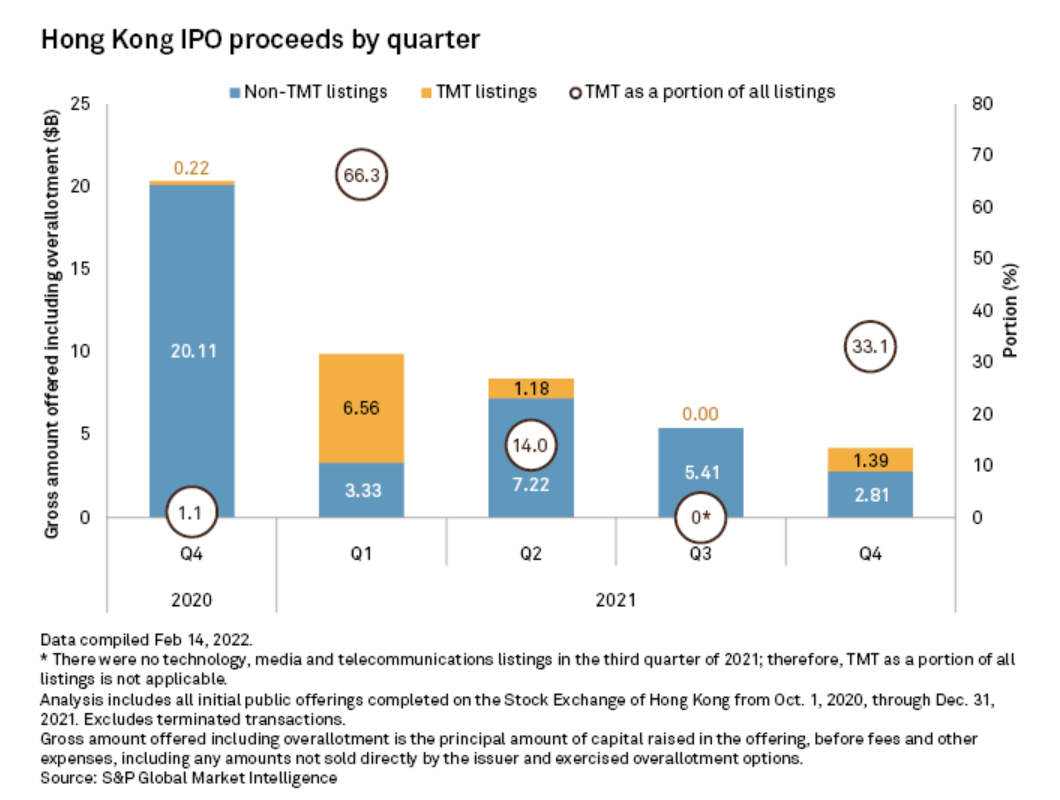 Proceeds from Hong Kong technology, media, and telecom IPOs rose sixfold year over year in the fourth quarter of 2021, while the number of listings also increased. Four companies raised a total of $1.39 billion in the quarter, up 531.8% annually, according to data from S&P Global Market Intelligence. A total of 11 technology, media, and telecom, or TMT, companies were listed on the Hong Kong Stock Exchange, or HKEX, last year, compared to 20 in 2020. The complete lack of TMT IPOs in the third quarter of 2021 is unusual, with the sectors frequently making up about 20% of all HKEX debuts.