New energy trading partnerships are set to emerge amid in the wake of Russia’s invasion of Ukraine. But as the geopolitical shock of the Russia-Ukraine conflict itself continues to metastasize, these major economies’ actions to find new energy relationships is spawning some new stresses with energy producers in their own countries and others abroad.

While the U.S.’s ban on Russian energy is curtailing imports of crude oil, the EU may find it impossible to eradicate its reliance on Russian natural gas in the near-term—even as it plans to reduce European demand for Russian gas by two-thirds before year-end. Japan has planned to take a phased approach in to remove Russian energy from its supply, in part by finding LNG investments outside of the former Soviet superpower.

Leaders of the G-7 nations committed to reducing their reliance on Russian energy "while ensuring that we do so in an orderly fashion and in ways that provide time for the world to secure alternative and sustainable supplies," aim to deny Russia its “most-favored nation” trade status, and "remain resolved to isolate Russia further from our economies and the international financial system," the U.S., U.K., Canada, France, Germany, Italy, and Japan said in a March 11 joint statement. In a statement the previous day, the G-7 leaders emphasized the OPEC alliance’s “key role to play” in increasing oil output where production isn’t meeting full capacity to mitigate the energy shock effects of the Russia-Ukraine conflict.

OPEC, however, has maintained its planned output production and sees soaring oil prices as a geopolitical problem of the West's own making. In the U.S., despite the Biden Administration tapping into the U.S.’s strategic petroleum reserves, the country’s own oil and gas industry appears uninterested in the government’s pleas to increase production, according to S&P Global Commodity Insights. The U.K.’s oil and gas industry may be more ready for the country’s ambitions of energy “self-reliance” but may face roadblocks without more allowances to engage in fracking. While Asian refiners wouldn’t face the same difficulties sourcing alternatives to Russian oil, some market participants are hopeful that OPEC+ reverses course to aid shrinking oil inventories, market participants said at the S&P Global Commodity Insights 9th Asian Refining and Petrochemicals Summit on March 15. In the EU, the radical shift in the market could in the medium-term accelerate the bloc’s energy transition to renewable sources—but not without short-term tensions with its major energy provider, Russia.

In response to Russia’s energy diversification efforts, Russia assured that it “remains a reliable supplier, a world-class guarantor of energy security. We value this reputation, but are ready for a harsh confrontation in the energy sector, if the need arises," Nikolai Kobrinets, director of European cooperation in Russia's foreign ministry, said in a March 12 interview with Interfax, according to S&P Global Commodity Insights. "I believe, the European Union would not definitely profit from it, because we have a greater safety margin and stronger nerves."

The effects of international coordination to reduce Russian’s energy from global supply has contributed to the International Energy Agency lowering its global refinery throughput estimates for this year following Russia's invasion of Ukraine. In a report on March 16, the IEA said that a 1.1 million barrels per day reduction in Russian refinery throughput "is not expected to be fully offset by increases elsewhere,” according to S&P Global Commodity Insights.

Additionally, as oil prices have fallen below $100 per barrel in recent days after reaching historic highs above $130 per barrel last week, short sellers speculating that price of oil may soon crash have increased their positions against energy stocks even as the sector has exceedingly outperformed every other equity sector this year, according to S&P Global Market Intelligence.

Today is Wednesday, March 16, 2022, and here is today’s essential intelligence. 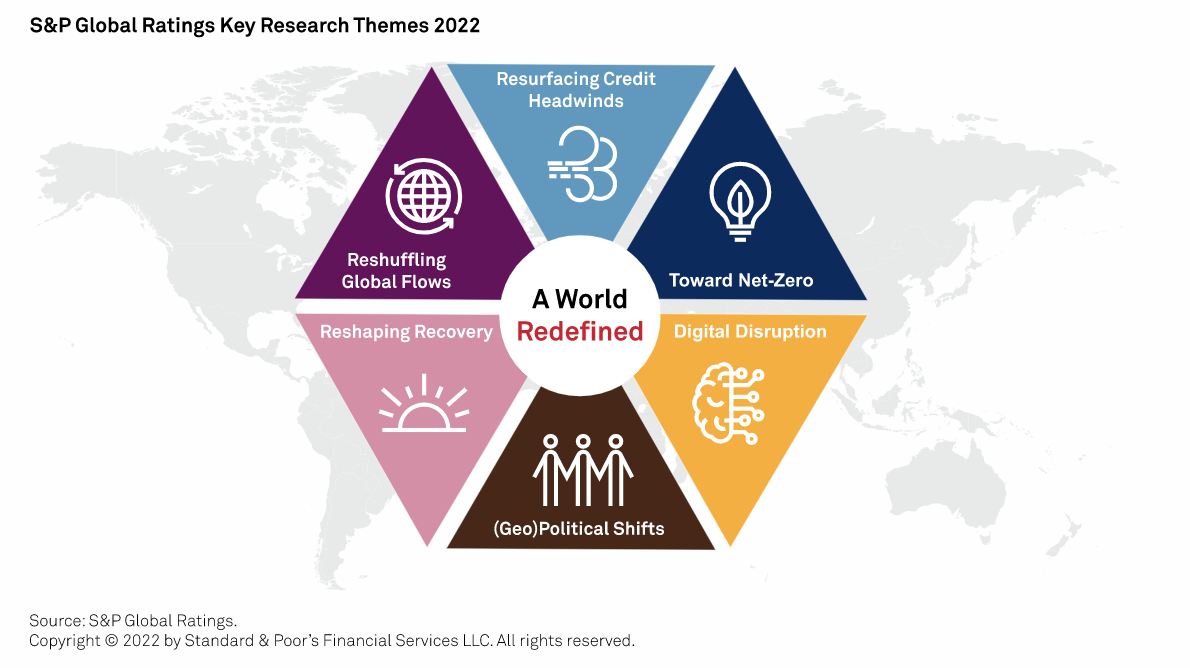 S&P Global Ratings sees 2022 as a year of divergence and accelerated disruption that will redefine the global economy and credit landscape. Events in the early part of this year alone have demonstrated just how much faster disruptions are reshaping our globalized world. Omicron surged and plummeted; the S&P 500 benchmark index has experienced noteworthy volatility; climate disasters are occurring with frightening regularity; and, most notably, Russia's military conflict with Ukraine has shocked markets and sent oil and gas, agricultural products, metals, and other commodities prices soaring—just as the global economy was already facing historic inflation and rising interest rates as major central banks signal aggressive monetary policy normalization. 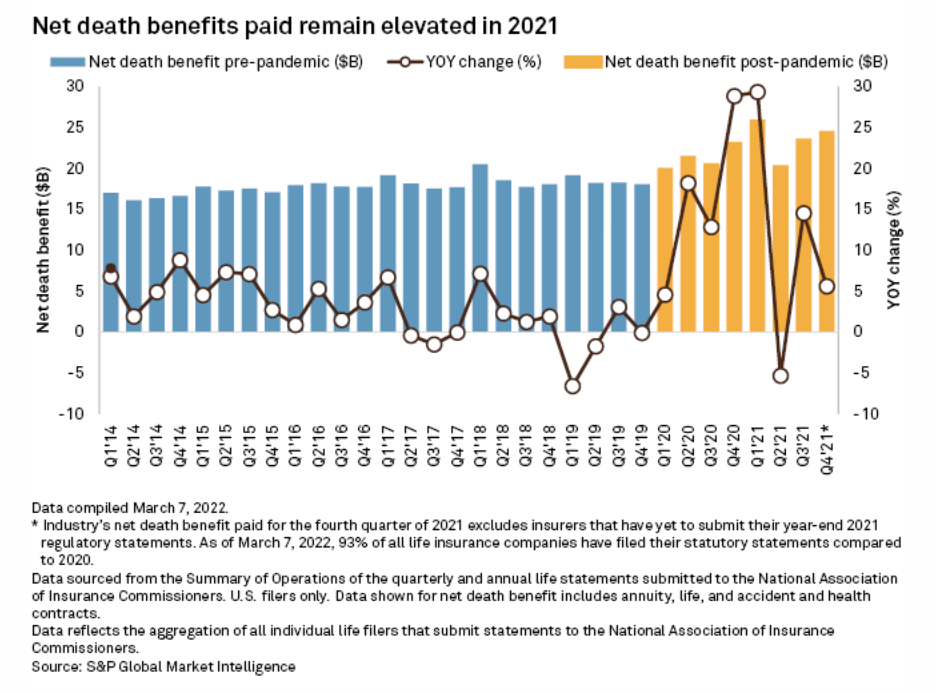 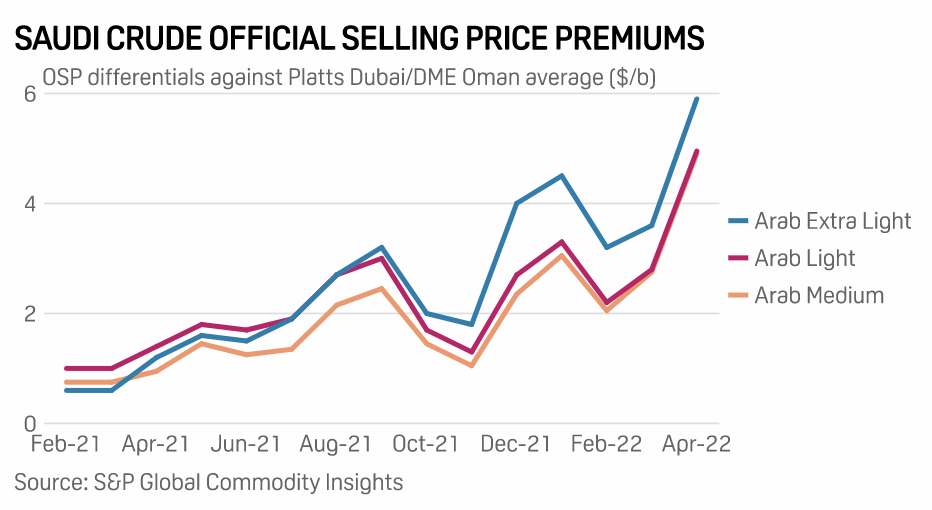 Battery metal prices have been escalating, placing price pressure on battery pack costs and overall EV adoption. Furthermore, buying practices and the make-up of long-term contracts have experienced radical changes in the past 18 months, including the adoption of indexation mechanisms. In the latest episode of Platts Future Energy, S&P Global Commodity Insights pricing specialists Scott Yarham, Henrique Ribeiro, and Michael Greenfield explore the lithium and cobalt markets, with both exhibiting their own unique dynamics and signs of breaking from traditional practices.

—Listen and subscribe to Future Energy, a podcast from S&P Global Commodity Insights

A popular saying comes to mind when considering the recent U.S. government plea to boost domestic oil and gas production: What goes around comes around. U.S. officials have appealed to patriotism to persuade oil and gas producers to turn on the taps to ease consumer pain resulting from rising inflation and roller-coaster energy prices. "We are on a war footing—an emergency—and we have to responsibly increase short-term supply where we can right now to stabilize the market and to minimize harm to American families," U.S. Energy Secretary Jennifer Granholm told an industry crowd at the recent CERAWeek by S&P Global conference.

Listen: Next In Tech | Episode 56: The Metaverse

It’s being talked about in grand terms, but The Metaverse not a single thing or even a specific technology. Senior analyst Ian Hughes is back to discuss the many facets of metaverses with Next in Tech host Eric Hanselman. While some are laying claim, the metaverse comes in many forms and holds the promise of enriching human interactions. Gaming interfaces are a popular representation, but the interconnection can have ties to the physical world.