On Monday, shares in videogame retailer GameStop Corp. closed up 18% after investors encouraged one another on the chatroom platform Reddit to short the stock—pushing it up as high as 145% at one point in the day, in what analysts concluded is a continuing “short squeeze.” This occurs when short sellers who bet on a stock they believe will decline scramble to cover their positions when it instead rises, which in turn pushes the stock even higher. The humungous market swing followed similar activity on Friday, when individual investors communicating on the popular “WallStreetBets” Reddit thread also pushed GameStop’s shares higher in an effort to curtail the short-seller Citron Research, which declared on Jan. 22 that the company was “pretty much in terminal decline” and bet against it. GameStop’s revenues have slowly decreased for at least the last five years.

The company was the most-shorted company on the benchmark S&P 500 index, with short interest relative to shares outstanding as high as 107.9% by mid-October and sinking only slightly to 97.7% at year-end, according to S&P Global Market Intelligence data.

Investors bet against the stock based on their belief that the retailer, which has struggled as gamers move predominately to online retailers, wouldn’t stay afloat during the coronavirus crisis. But day-traders on popular trading platforms like RobinHood are coalescing around the stock in a manner that has sparked some concern while also highlighting the changing investor landscape away from fund managers.

“This GameStop situation is the craziest I think I’ve ever seen. Usually, you have a short squeeze and it goes up, but this one keeps going. So this really speaks to the changing demographics of investors in the market,” Bryn Talkington, managing partner of the Texas-based investment advising firm Requisite Capital Management, told CNBC on Jan. 25. “What happens is this becomes a big feedback loop. As GameStop rises and rises, the actual market makers actually have to start buying more stock. So it’s more than just a short squeeze. It’s actually this dislocation between these short-dated, out-of-the-money calls and the market makers being in this feedback loop. It ends when it ends.”

Such platforms have “brought together a community of people who are in certain situations acting on a coordinated basis,” Edward Park, the chief investment officer of the U.K.-headquartered investment management company Brooks Macdonald, told the Wall Street Journal. “I think it’s partially people working from home and having more attention on the stock market during this period…I don’t think it’s creating a fundamental problem for the market.”

Other technology stocks have recently rallied on fundamentals—rather than short squeezes.

Last week, after Netflix announced growth to its paid subscriber numbers and a greatly improved cash position that surpassed analysts’ expectations in its latest quarterly earnings, the streaming service company’s stock closed the week of Jan. 21 up 16.44%. Netflix added 9.5 million net paid subscribers in the fourth quarter of 2020, beating its guidance of 6 million subscribers and bringing its total past 200 million. The company also expects 2021 to be its first year for cash flow to break even after reporting $1.9 billion in positive cash flow last year, and will no longer need to rely on external financing to fund its operations.

Unlike GameStop, Netflix has the most penetration of any player in its industry, and investors are likely to continue to treat it as such. "They're good at putting benchmarks out there and typically hitting them, at being open and honest about what's challenging. To me, that's part of the Netflix story and what investors are piling into," Kagan analyst Seth Shafer told S&P Global Market Intelligence. Kagan is a media research group of S&P Global Market Intelligence. "It's pretty established where the industry is going and what we're talking about as far as market share."

Today is Tuesday, January 26, 2021, and here is today’s essential intelligence. 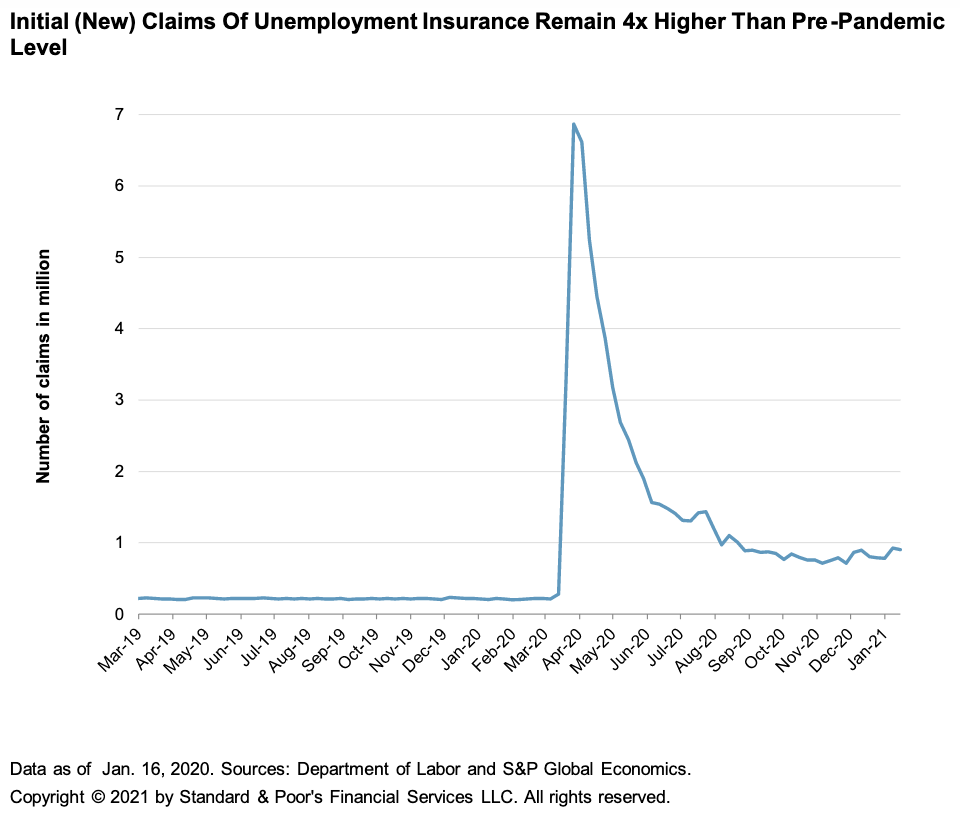 Policy focus in the coming weeks will be on the health of the American people and support for the U.S. economy. The elevated unemployment claims indicate the need to build on policy momentum. Still, not everything is in distress. Housing, a very important sector for the economy, continues to surprise on the upside, and forward-looking indicators imply the current level of activity has staying power. Manufacturing data suggests machines will stay warm this winter despite a stop-go pattern in the people-sensitive services side of the economy.

Consumer companies are offering incentives to thousands of their U.S. employees to get vaccinated for COVID-19 and helping out with government distribution efforts. But so far they have shied away from handing down vaccine mandates.

More U.S. companies claimed $1 billion in liabilities in 2020 than in any year since 2009 as the coronavirus pandemic took a toll on businesses and consumers and stifled economic activity. 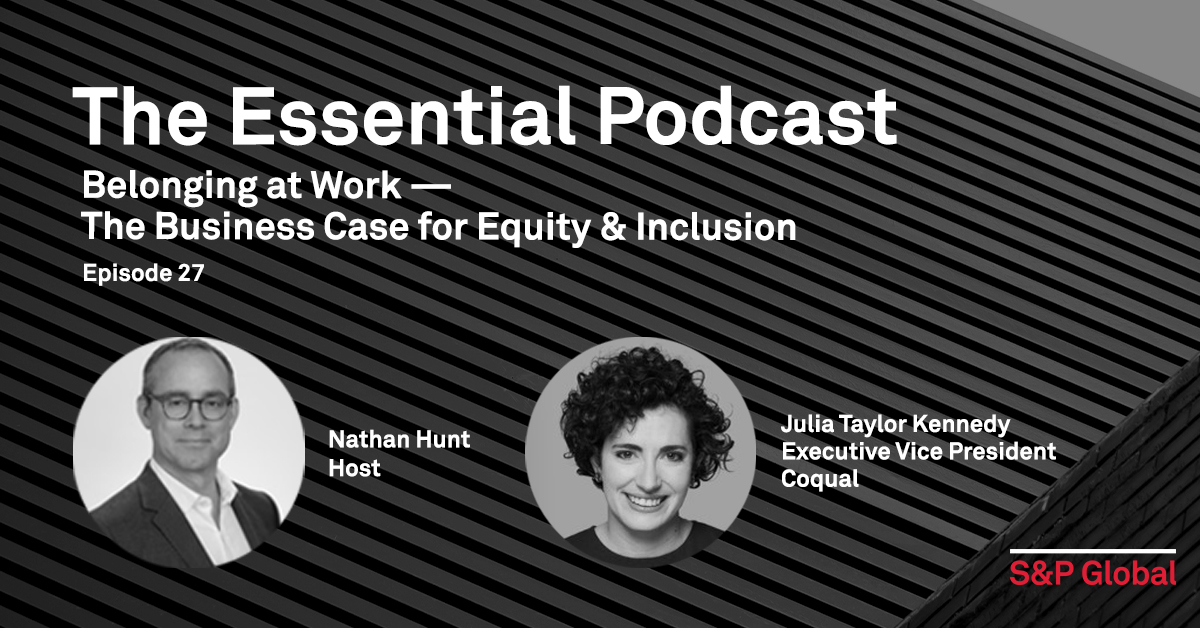 Who feels that they belong at work, and who feels excluded? Julia Taylor Kennedy, Executive Vice President at Coqual, joins the Essential Podcast to discuss Coqual’s groundbreaking global research that sought answers to these questions.

—Listen and subscribe to The Essential Podcast, a podcast from S&P Global

Several major US companies that use large volumes of power called on the federal government Jan. 25 to adopt strategies for transitioning to zero-carbon energy, including capacity market improvement, wholesale power market expansion and greater focus on resource adequacy.

The U.S. utility sector is gearing up for what Wall Street expects to be a busy fourth-quarter 2020 earnings season, even if results themselves may take a hit.

For the first time ever, renewable energy overtook fossil fuels in the EU's electricity mix in 2020, rising to 38% of overall generation as the share of fossil fuels declined to 37%.

The European Central Bank sees rapid progress on carbon pricing as the EU Emissions Trading System is set to be aligned with the EU's stronger climate targets for 2030, the bank's president Christine Lagarde said Jan. 25. In this week's highlights: New US polices will be on the agenda during the online World Economic Forum, a global container shortage drives European polymers up, and the first new interconnector between the UK and France starts operating.

Winter temperatures in North Asia fell to their lowest in decades in early January, sending fuel demand for heating and power generation through the roof.

'Permanent State Of Fear': 2 Years After Disaster, Mine Tailings Dams A Big Risk

On Jan. 25, 2019, a large dam full of mining waste from the Corrego do Feijao iron ore mine owned by Vale SA ruptured and sent a mudslide downstream toward Brumadinho, Brazil, killing at least 270 people. Two years later, some question if the mining industry has done enough to avert further disasters.

President Joe Biden's inauguration was particularly momentous, including for energy companies and markets. A flurry of executive actions were signed just hours after Biden took the oath of office, and against that background there are big changes underway in federal policy. Oil, natural gas and energy transition will all be impacted by these early moves.