The meme stock moment affecting equity investing is more than just a situational phenomenon. The short squeeze that has sent the stocks of struggling businesses, namely the brick-and-mortar video game retailer GameStop and cinema group AMC Entertainment, soaring may permanently alter risk management and burst what many see as a market bubble.

"The GameStop phenomenon will forever change how we look at short selling," Edward Moya, a senior market analyst at OANDA, told S&P Global Market Intelligence. "The future of short selling will need to respect the power of the retail trader and realize that having a strong fundamental argument against is not reason enough to short … Short sellers have thrived in the past in exposing fraud or identifying extremely unjustified valuations, but now they will need to clearly outline their thresholds on how much pain they can stomach if another GameStop-type incident occurs."

A short squeeze occurs when short sellers who bet on stocks that they believe will decline rush to cover their positions when the price instead rises—which ultimately pushes the stocks even higher.

Despite restrictions put in place last week on volatile trades by Robinhood Markets and other commission-free brokerages, retail investors from the “WallStreetBets” Reddit community pushed GameStop’s shares 400% higher week-over-week to close on Friday at $325. Their coordinated efforts to boost the company’s stock price resulted in Melvin Capital suffering a 53% loss of $4.5 billion in assets, according to reports in the Wall Street Journal, Financial Times, CNBC, and other outlets citing sources familiar with the firm’s results. Individual investors targeted the hedge fund for what they characterized as its unfair market advantages after it disclosed its short position in the video-game retailer.

AMC experienced similar volatility due to social media interest. The company’s stock enjoyed a 525% gain in January, erasing all of its 2020 losses, due to a short squeeze started by the “WallStreetBets” community and other retail investors. However, the theater chain’s fundamentals present a complicated picture: While not on the brink of bankruptcy, such an outcome is not off the table for AMC, according to S&P Global Market Intelligence.

Many market observers perceive the stock prices of GameStop and AMC, which have both suffered during the pandemic’s hit to retail, as troublesome overvaluations.

"Equity markets are supposed to be credible markets of value with some speculation," Andrew Brenner, head of international fixed income at National Alliance Securities, said in a Jan. 29 note, according to S&P Global Market Intelligence. "This is out of control and will end badly for equity investing."

The U.S. Securities and Exchange Commission warned on Friday that it “will closely review actions taken by regulated entities that may disadvantage investors or otherwise unduly inhibit their ability to trade certain securities.” The securities regulator also signaled its concern over the situation’s broader implications, noting that “extreme stock price volatility has the potential to expose investors to rapid and severe losses and undermine market confidence.”

“You can’t do that in the middle of a trading cycle,” Senator Elizabeth Warren, a Democrat of Massachusetts, said in a CNN interview regarding Robinhood’s trading restrictions. “It’s not about protecting people from making bad trades. It’s about keeping the playing field level.”

Robinhood announced on Sunday that it will continue restraining investors’ trading in stocks that have been swept up in the short squeeze frenzy, but narrowed its list of restricted companies from 50 to eight, including GameStop, AMC, BlackBerry, and Nokia. Retail investors on the platform will only be allowed to purchase a restricted number of shares and options contracts in such companies, and can’t open new positions if their holdings exceed these amounts, starting today. “These limits may be subject to change throughout the day,” Robinhood said.

Robinhood and other major brokerages including TD Ameritrade, Charles Schwab, and Interactive Brokers Group, who placed restrictions on meme stocks said that they did so to manage their own risks and protect their firms from financial losses alongside curtailing market volatility. "We have a huge concern over the financial viability of the intermediaries," like the smaller brokers and clearinghouses, Interactive Brokers Chairman Thomas Peterffy told S&P Global Market Intelligence. "This could become a domino effect … A lot of people are losing a lot of money on these crazy stocks.”

Today is Monday, February 1, 2021, and here is today’s essential intelligence. 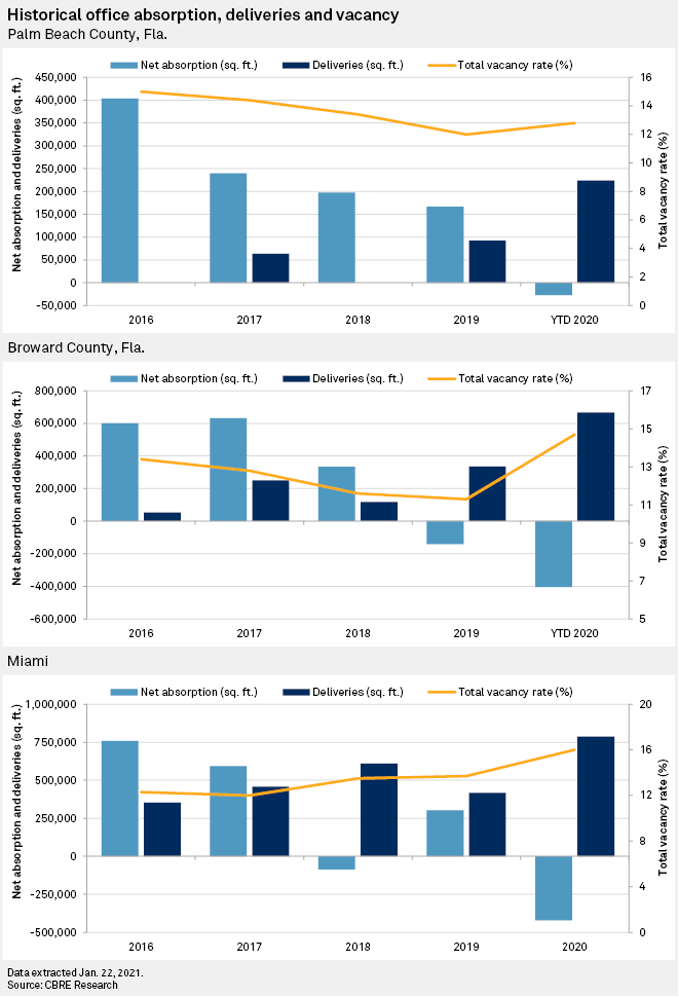 The pandemic and shutdown of major urban centers, alongside the explosion of telecommuting, created a perfect storm of incentives for firms to re-imagine their real estate needs. The previously socially "unacceptable" move — decamping New York City and other major markets deemed essential to business for warmer, less congested climes — is now acceptable. 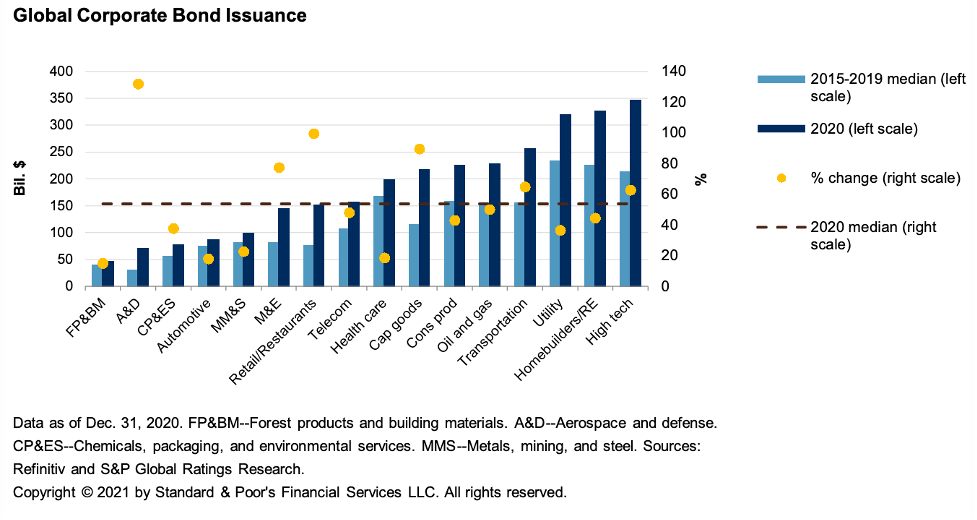 After Showcasing Resiliency During An Unprecedented Year, Global Insurance Brokers And Servicers Enter 2021 On Sound Footing 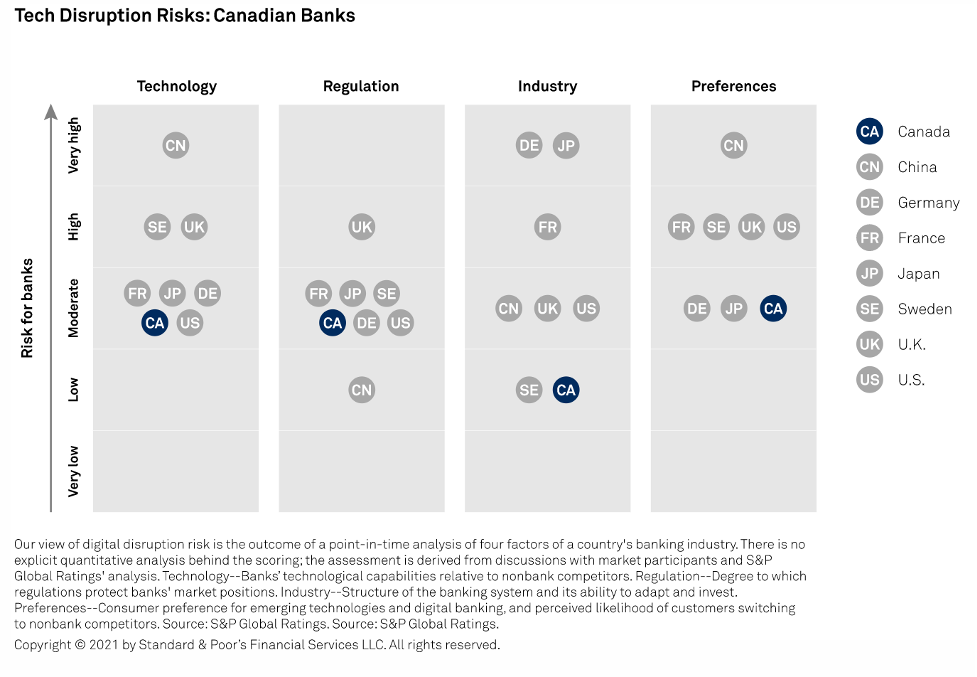 S&P Global Ratings believes that Canada's major banks are moderately placed to deal with tech disruption risks, in part thanks to their dominant market positions.

Tech Disruption In Retail Banking: COVID-19 Accelerates A Digital Shift In The U.S.

The COVID-19 pandemic has made it abundantly clear that U.S. banks' tech spending in recent years was worth it, but more will be required. S&P Global Ratings believes most U.S. banks are up for the challenge, to varying degrees.

Sustainability In 2021: A Bird's-Eye View Of The Top Five ESG Topics 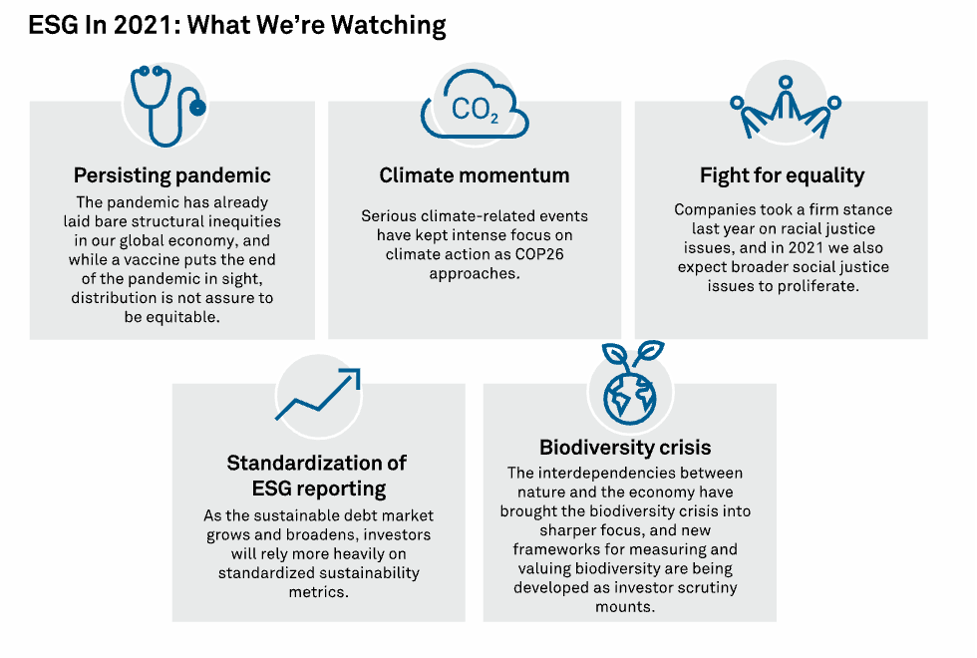 Over the past year, the global economy faced an unprecedented string of compounding ESG-related disruptors that have irreversibly shaped how companies do business and, in 2021, these ESG forces will continue to play out on a larger stage.

Why Just Transition, Environmental Justice Are Key To Any Climate Plan

Any successful plan to combat climate change needs to address both environmental and social concerns, according to remarks last week from both the new U.S. President and the head of the world's largest asset manager.

Xcel Execs Call Biden's 2035 Clean-Energy Goal Tough, But Do Not Dismiss It

Xcel Energy Inc. executives cautioned on Jan. 28 that US President Joe Biden's aspiration for a carbon-free grid by 2035 requires major technological advancements in the power sector, but did not dismiss the possibility of achieving the benchmark.

Enel to Get Out of Gas By 2050, Says Carbon Capture 'Will Not Solve The Problem'

Enel SpA is planning to entirely phase out natural gas from its portfolio as it shoots for a net-zero emissions target, arguing that technology to capture carbon has proven to be a bad bet in energy companies' quest to decarbonize.

A surge of investment into America's solar industry last year meant big business for a group of manufacturers whose supply chains wind through China's autonomous Xinjiang region, an industrial hub where the U.S. State Department has said Beijing is committing "genocide and crimes against humanity" in its treatment of Uighurs and other Muslim minority groups. 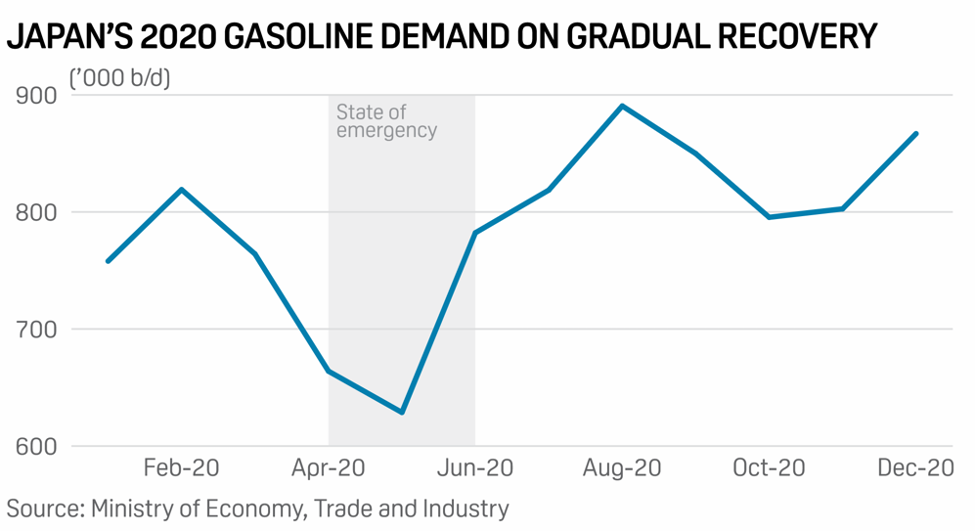 Japan's gasoline demand in January is estimated to have fallen to the lowest monthly level in 32 years due to the restrictive measures of the month-long state of emergency lockdown, but a severe cold spell hitting the country has propelled kerosene demand to jump 25% higher from a year ago.

Global oil demand will rebound by more than 6 million b/d in 2021 and return to 2019 levels a year later despite the sharp acceleration in COVID-19 infections and new lockdowns which have hit energy consumption from the end of last year, according to S&P Global Platts Analytics.

More restrictive oil and gas leasing, permitting and drilling on US federal lands and waters proposed by the Biden administration cast a wide net, but lack critical details and the policy still needs to be fleshed out for the risks to be fully evaluated, Chevron's top executive said Jan. 29.