What Would Emerging Markets Be Without China?

The death toll continues to rise in the Lebanese capital of Beirut following a massive explosion Tuesday night in the city’s port district. Government officials attributed the explosion to 2,750 tons of highly explosive ammonium nitrate, which had been stored in a warehouse in the port.

The ammonium nitrate had been impounded in 2014 from a ship that had been abandoned by its owners after it experienced technical difficulties on its way to Mozambique, according to Lebanon's Supreme Defense Council. Ammonium nitrate is used as both a high-nitrogen fertilizer and as an industrial explosive.

"Lebanon today is sliding towards becoming a failed state," Mr. Hitti wrote in his resignation letter, bemoaning the absence of a "real will to achieve structural reforms ... which our national society asks for and the international community are calling on us to do."

The notion of a “failed state” is increasingly unpopular in public policy circles.

“Instead of being labeled ‘failed,’ such places are now commonly considered ‘fragile.’ Fragility is considered to be the opposite of state stability on a continuum between a well-functioning and completely absent state,” Sarah Bressan, a research associate at the Global Public Policy Institute, wrote in May of this year.

The annual Fragile States Index, released by Foreign Policy magazine and the Fund For Peace, in which countries are benchmarked against 12 indicators used to determine vulnerability in areas including human rights, public services, demographic pressures, refugees and internally displaced persons, and security. Lebanon has a fragile state rating of 85, placing it 44th out 195 countries.

Roughly, 1.8 billion people live in fragile contexts, according to the Brookings Institute.

The International Monetary Fund warned in May that the sharp drop in incomes in fragile countries—combined with over-extended or non-existent health care facilities—could lead to further destabilization.

“Failure to ease the potential suffering could further aggravate underlying social and political instability and could trigger a reinforcing spiral of economic hardship and conflict,” the IMF said in its “COVID-19 Poses Formidable Threat for Fragile States in the Middle East and North Africa” report.

Damage to the port area of Beirut is likely to place a further drag on the import-dependent Lebanese economy. Imports had already declined 50% this year due to the economic pressures of the pandemic.

The Lebanese government has estimated that by year-end, 60% of the population will be living below the poverty line.

Today is Thursday, August 6, 2020, and here is today’s essential intelligence.

The COVID-19 pandemic forced consumer products companies to adapt to sudden changes in demand and periodic supply chain disruptions, but large branded staple companies were prepared and benefitted from the crisis. The industry has dealt with a faster-paced environment for at least the past decade because digital platforms and the availability of co-packers lowered barriers to entry. That enabled small to midsize, agile, and digital savvy competitors to take share.

The surge in online spending during national lockdowns enforced to delay the spread of the COVID-19 virus will have a lasting impact on consumer behavior, according to the CEO of Europe's largest listed warehouse landlord. David Sleath, CEO of Segro PLC, said during a first-half earnings call that the levels of online spending reached in recent months are unlikely to hold as lockdown measures are lifted, but that shoppers' recent increased exposure to e-commerce would rapidly accelerate its growth.

The COVID-19 crisis is having a devastating impact on the travel and leisure industry, and threatens economies and communities that rely on it, the CEO of global hospitality giant AccorHotels said. Speaking during a first-half earnings call, Sébastien Bazin said that the pandemic is "taking the world decades back" in terms of traveler numbers, jobs in the industry, and contribution to global GDP. 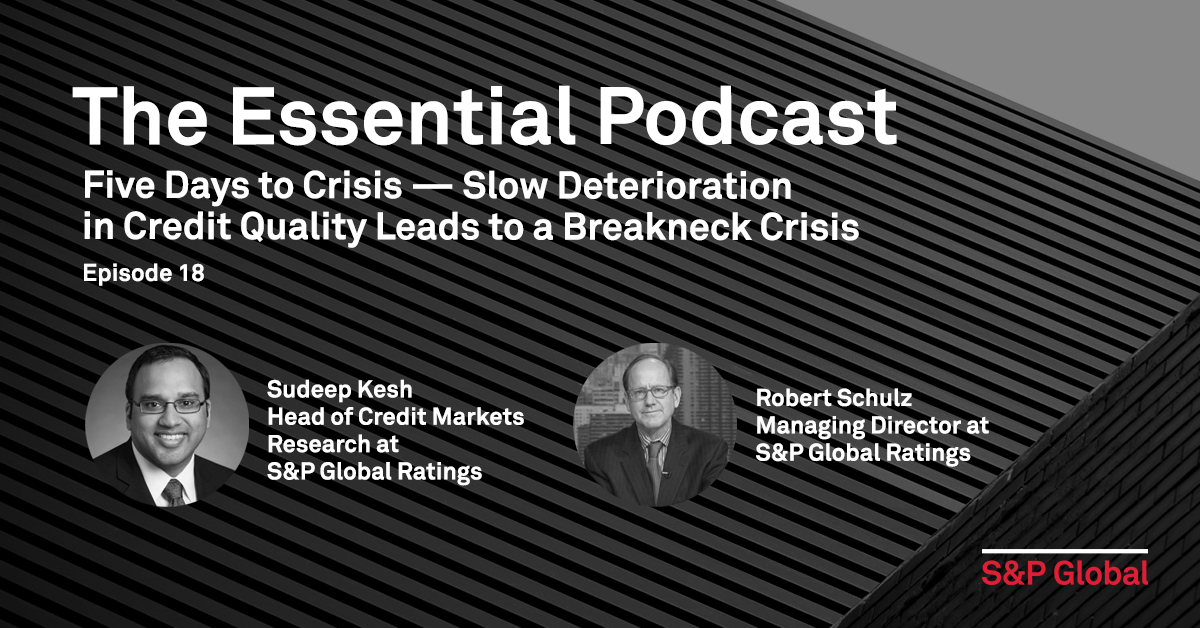 Sudeep Kesh and Robert Schulz of S&P Global Ratings join The Essential Podcast to help explain the complexities of corporate credit markets. Lower for longer interest rates, the search for yield, a false binary of investment grade vs. speculative grade, and a global pandemic have all conspired to lead to a challenging environment for corporate credit.

— Listen and subscribe to the Essential Podcast from S&P Global

“It was one of the worst markets we’ve ever seen” - Deputy CIO at DoubleLine Jeffrey Sherman joined Joe Cass and Sudeep Kesh on Fixed Income in 15 to discuss Central Bank actions, fallen angel credits and the Hollywood movie ‘Moneyball.’

U.S. loan defaults continued to rise in July, surpassing 4% by issuer count for the first time since 2010, after five constituents of the S&P/LSTA Leveraged Loan Index tripped defaults on $7.7 billion of term loans. The rate by issuer count, at 4.14%, is the highest since September 2010. By amount, defaults, at 3.90%, is at a high mark since February 2015. Excluding Energy Future Holdings Corp.'s outsized $19.5 billion default in April 2014, the rate by amount is the highest since June 2010. 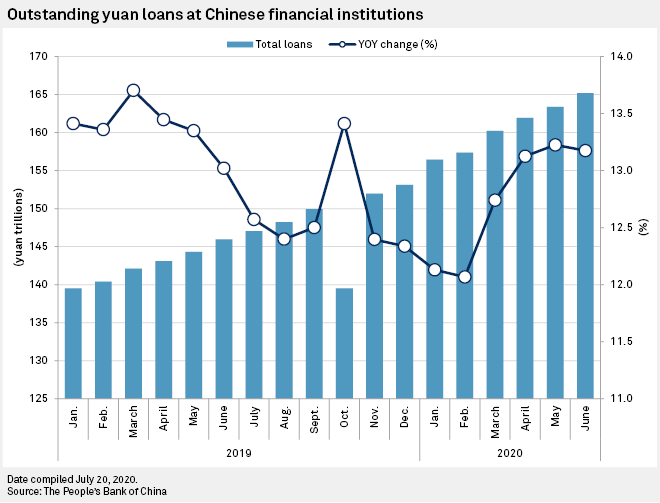 Long-term loans to Chinese companies and advances to small businesses grew at the fastest rates in more than two years, indicating Beijing's years-long efforts to redirect liquidity to the real economy have started taking effect. Although the Chinese banks' earnings will likely remain under pressure in 2020, analysts believe the data suggest the default risk of bank loans might be lower than it seemed earlier this year. They say China's economic recovery appears to be on a firmer footing, as credit demand is driven more by the manufacturing, infrastructure and private sectors, instead of real estate and investments in stocks and bonds as in the previous economic cycles.

TikTok buy 'unique deal of a decade opportunity' for Microsoft 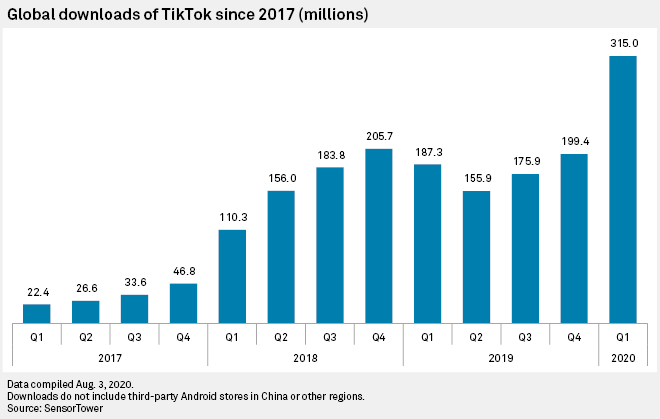 This is part 1 of S&P Global Market Intelligence’s coverage on recent developments around the short-video sharing app TikTok. Though it faces challenges in Washington, analysts are bullish on Microsoft Corporation's intended purchase of video-sharing app TikTok Inc., noting that the deal should bolster the tech company's portfolio and broaden its appeal beyond enterprise software.

This is part 2 of S&P Global Market Intelligence’s coverage on recent developments around the Chinese short-video sharing app. A sale of short-video sharing app TikTok Inc. could drive down Beijing Byte Dance Telecommunications Co. Ltd.'s valuation and force the company to shift its focus on operations in China, analysts said.

Despite Roku Inc.'s strong position in the streaming market, analysts say the company could still see a negative impact from the COVID-19 pandemic. Best known for its line of streaming boxes and sticks, Roku also earns a large portion of revenue from video advertising. The company has two revenue segments: player and platform. The former comes from hardware sales, while the latter and larger segment, platform, earns revenue through advertising and subscriptions. 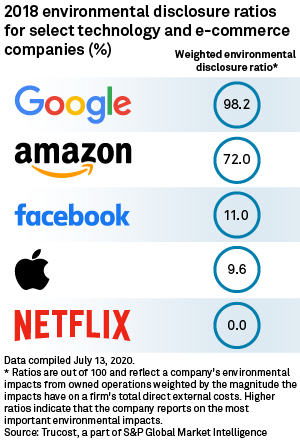 Big tech companies have a mixed record when it comes to disclosing their carbon footprints, but there are recent indications the industry is taking note of investor demands for greater transparency. In July, social media giant Facebook Inc. published its first-ever sustainability report touting progress toward the goal of reducing its greenhouse gas emissions by 75% and powering its global operations with 100% renewable energy by the end of 2020.

Evergy Inc. sees an opportunity to accelerate its emissions reductions and clean energy transition while beefing up reliability, through a newly unveiled strategic plan. The company on Aug. 5 announced a stand-alone five-year strategic plan designed to increase earnings and capital investments, following the conclusion of an independent review of its business.

Listen: Is Brazil becoming a net exporter of primary aluminum?

Brazil has shifted to become a net importer of primary aluminum since 2014, but the COVID-19 pandemic has changed the market outlook. Is the increase in Brazilian P1020 exports here to stay? How does this situation impact domestic supply? Adriana Carvalho and Henrique Riberiro of S&P Global Platts look at those issues and more.

Southern California Gas Co. sued the Golden State's top energy policy and planning agency in a bid to prevent it from carrying out a policy that would limit natural gas use and promote building electrification. Lawyers for SoCalGas filed a complaint with the California Superior Court for the County of Orange alleging that the California Energy Commission, or CEC, failed to fulfill its legal requirement to report on the benefits of natural gas use. The Sempra Energy subsidiary also accused the CEC of improperly establishing an anti-gas policy that undermines lawmakers' intent to preserve the fuel's role in California's energy mix.

The EU steel industry is now in "a state of emergency" after the coronavirus hastened a decline in the steel market that was already there in 2019, European Steelmakers' Association (Eurofer) said August 5. EU-28 apparent steel consumption shrank 12% year on year in the first quarter -- the fifth consecutive quarter of falls -- following a drop of 10.8% in Q4 2019, as EU manufacturing sector business conditions, particularly in the key automotive industry, continued to deteriorate, Eurofer said in a statement. Total Q1 apparent consumption in the EU was 37.6 million mt, it said.

The gold spot price broke above $2,000/oz late Aug. 4 and hit an all-time high of $2,044/oz around 1100 GMT of Aug. 5, analysts said. "Huge session for the precious on Tuesday [Aug. 4] as gold breaks the psychological $2000 barrier for the first time. The action kicked off in early NY trading, the prospect of further US stimulus is putting pressure on the greenback and treasury yields which provided the catalyst for the rise," analysts at precious metal refiner MKS PAMP said Aug. 5.

India's jet fuel exports which dropped almost 60% in June from a year earlier are expected to keep falling at least through August as refineries undergo maintenance and global demand weakens, market participants and analysts said. India and the rest of South Asia will have refinery outages totaling 1.775 million b/d in August, with 1.425 million b/d of run cuts due to the COVID-19 impact on demand, S&P Global Platts Analytics said in a Aug. 3 report.