The most active market in the U.S. in terms of corporate wind and solar power purchase agreement, or PPA, capacity is Texas.

Green tariffs typically involve a long-term agreement between the utility and the corporate off-taker, often between 10 and 20 years in duration.

The corporate renewables market has become a major segment of the energy industry over the last five years and in the U.S. specifically, just over 41,000 MW of wind and solar capacity has been contracted to non-utility corporate off-takers. In vertically integrated electricity markets, these corporations often need to work with local utilities to procure the necessary renewable capacity to offset their consumption. Targeted renewable procurement programs from these utilities have eliminated a potential roadblock in the rapidly growing market segment leading to nearly 20,000 MW of corporate renewable purchases in regulated markets.

The most active market in the U.S. in terms of corporate wind and solar power purchase agreement, or PPA, capacity is Texas. Favorable wind and solar resources, along with accessible land, have helped make the state a hub for renewable development. These drivers, combined with the production and investment tax credits for wind and solar enable developers to engage in low cost PPAs. The emergence of virtual PPAs has made corporate off-takers a more active counterparties to these PPAs. Developers gain the financial security of a stable, long-term revenue stream in an increasingly competitive market and companies can earn renewable energy credits, or RECs, to offset their annual energy consumption in their quest go 100% renewable.

This dynamic has helped Texas, along with other states like Illinois and Ohio where generation is offered competitively, become leading markets in corporate renewable procurement. Conversely, while the flexibility of the virtual PPAs is viewed as attractive, many companies are also interested in securing contracts for renewable capacity in close proximity to their facilities for a more direct supply of renewable generation while avoiding the risks associated with virtual PPAs.

This is particularly true for technology companies like Amazon, Facebook, Google, and Microsoft, all of which own large, energy-intensive data centers where on-site solar generation is not sufficient to offset their sizable electricity demand. These considerations have led to expanded corporate renewable purchase activity in vertically integrated markets like Virginia, Georgia, Nevada and New Mexico. Since these are regulated markets, companies must engage with the local utilities in some form to develop and purchase renewable energy to offset their high demand. 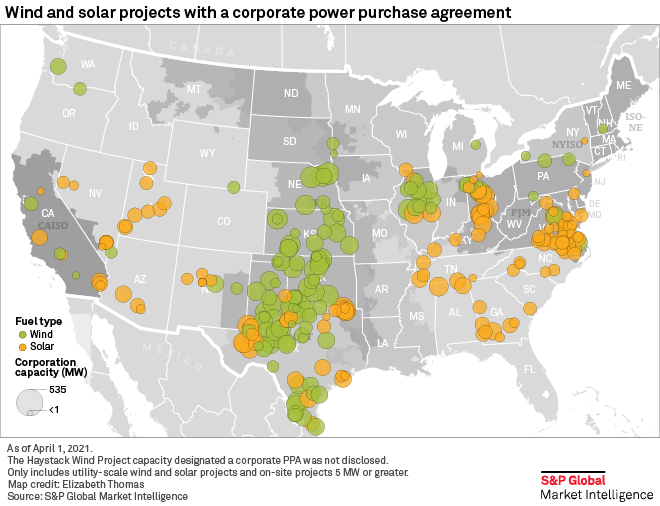 In response, the utilities and there regulators have created targeted programs for corporate renewable procurement so these companies can easily obtain bundled renewable energy. Known as green energy tariffs or a green energy riders, these programs allow large commercial customers to purchase energy and the associated RECs from a wind or solar project at a specialized rate. Green tariffs typically involve a long-term agreement between the utility and the corporate off-taker, often between 10 and 20 years in duration.

Green tariffs come in a few different forms. These include market-based rate tariffs, subscriber-based tariffs, and "sleeved" PPAs. The first type of program allows the customer to purchase the renewable energy at a wholesale "market-based" rate. The "subscriber-based" model allocates specified portions of capacity from a renewable project to a corporate off-taker for a specialized rate. So called sleeved PPAs use the same structure as traditional PPAs, but the utility acts as an intermediary between the project and corporate buyer, handling the financial transactions and transfer of energy. Sleeved PPAs are common in both regulated and de-regulated markets.

Regardless of the tariff structure, utilities are required to obtain approval from state regulators for these programs to ensure costs from projects supplying a few large corporate customers are not passed on to residential and smaller commercial and industrial customers.

Virginia is one of the largest data center markets in the world and with many of the owners being renewable-focused, it is a growing hub for corporate PPA deals as well. Dominion Energy Inc. subsidiary Virginia Electric and Power Co., or VEPCO, developed several green tariff deals for its large commercial customers. There is over 2,700 MW of solar capacity in Virginia contracted to corporate customers with Amazon.com Inc., Facebook Inc. and Microsoft Corp. being the largest purchasers. Amazon has worked with VEPCO to procure solar power via both market-based rate and PPA agreements. The "Schedule RF" tariff was recently approved by the Virginia State Corporation Commission. Facebook is utilizing the Schedule RF program to purchase power from the Dominion-owned Spring Grove 1 Solar Facility (US-3 Solar Project), Colonial Trail West Solar Facility (US-3 Solar Project) and the Gloucester Solar Facility in Virginia.

In North Carolina, Duke Energy Corp. subsidiaries Duke Energy Carolinas LLC and Duke Energy Progress LLC implemented their Green Source Advantage programs, with Alphabet Inc. subsidiary Google LLC and Facebook, among many others, utilizing the program in some form. Nearly 1,400 MW of wind and solar capacity has been contracted to corporate off-takers in the state. 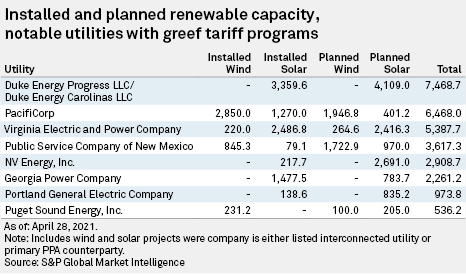 In 2018, Georgia utility Georgia Power Co., a subsidiary of The Southern Co., signed PPAs with the Dougherty County Solar Facility and the Tanglewood Solar Project (GA3) to serve corporate off-takers Google, Target Corp., Johnson & Johnson and Walmart Inc. in a subscriber-based model. In 2020, the Customer Renewable Supply Procurement program was approved allocating 1,000 MW – 600 MW for existing customers and 400 MW for new customers – in a subscriber-based model. Facebook is the largest non-utility off-taker in the state with over 430 MW of solar capacity.

In Nevada, Berkshire Hathaway Inc. subsidiary NV Energy Inc. developed the Green Energy Rider program with Apple Inc. and Switch Inc. utilizing the tariff for 320 MW and 180 MW, respectively. In 2020, the Large Customer Market Price Energy Schedule program was approved. Google enrolled in the program to purchase 350 MW of solar and up to 280 MW of energy storage to service its Henderson data center.

Other programs include the Green Direct program in Washington, offered by Puget Holdings LLC subsidiary Puget Sound Energy Inc. The program is a subscriber-based model where the utility sold portions of the power generated from the Skookumchuck Wind Energy Project to Starbucks Corp., Target and REI. In New Mexico, PNM Resources Inc. subsidiary Public Service Co. of New Mexico created a Green Energy Rider that appears to be solely for Facebook and its data centers in the area. The utility has worked with the social media company to purchase nearly 400 MW of wind and solar power in the state.