Owing largely to clean air commitments by local utilities, the renewable-portfolio-standard-disinclined U.S. Southeast achieved a steeper reduction in CO2 emissions than the broader U.S. between 2005 and 2021, illustrating a path to successful decarbonization outside of broad mandates. Decarbonization, however, is not necessarily synonymous with green energy. Energy providers in the region largely leveraged natural gas substitution for coal generation and, to a lesser extent, the expansion of nuclear energy to curb carbon emissions, markedly falling behind on the renewables front compared to other parts of the U.S. With the passage of the Inflation Reduction Act, the partly coastal region and its photovoltaic energy-friendly latitudes are in the envious position of offering significant upside to the wind and solar capacity development needed to meet milestones contained in the law.

Power sector CO2 emission reduction in the U.S. Southeast is tracking ahead of the national curve down 36% from 2005 through 2021 versus a 33% decrease at the national level thanks in part to clean energy commitments on the part of local interconnected utilities.

That said, a strong push to substitute natural gas for coal explains most of these results. At this juncture, the region arguably risks losing its CO2 emission-cut momentum without greater renewables investment.

The Inflation Reduction Act could help. Tax credit-incentivized wind and solar developers could soon flock to the currently underdeveloped Southeast an inevitable outcome in the long run if the nationwide clean energy milestones laid out by the law are to be met. 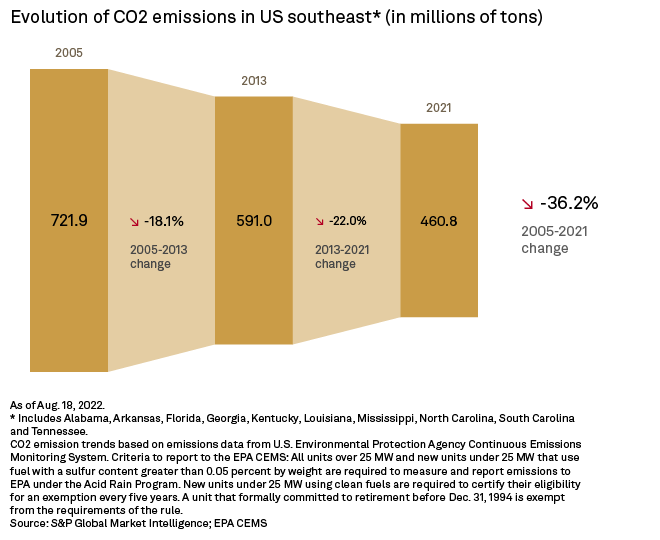 Tracked CO2 emissions in the region fell 36.2% from 2005 through 2021 from nearly 722 million tons to about 461 million tons based on an analysis of S&P Market Intelligence data from the U.S. Environmental Protection Agency Continuous Emissions Monitoring System. In comparison, overall tracked U.S. CO2 missions declined 33% in the interval. That said, accounting for a little under a quarter of the U.S. population, the 10 states comprising the U.S. Southeast generated slightly over 27% of all tracked U.S. CO2 emissions in 2021.

In the 15 years through 2021, the U.S. Southeast added a net 16 GW of utility-scale solar capacity, expanded its natural gas portfolio by a net 6.3 GW and retired a net 28 GW of coal capacity, based on Market Intelligence data. It also slightly augmented its nuclear profile, up a net 287 MW. Yet, as of this writing, the region was still operating more than 56 GW of coal capacity, with the fuel comprising 19% of its generation fleet second only to natural gas.

Nuclear is a relatively distant third, at 12%. For perspective, the U.S. Southeast operates nearly 37% of the overall U.S. nuclear capacity. Furthermore, the region is tagged to host over a third of the additional U.S. nuclear capacity currently in the pipeline. This notably includes plans to nearly double the capacity of Georgia's 2.3-GW Alvin W. Vogtle Nuclear Plant, co-owned by Georgia Power Co., Oglethorpe Power Corporation, Municipal Electric Authority of Georgia and the City of Dalton Georgia. Georgia Power's parent, Southern Co., has committed to cutting its greenhouse gas emissions by 50% from 2007 levels by 2030, ultimately aiming for net-zero by 2050.

Renewables essentially remain an afterthought in the U.S. Southeast, at 8% of the region's generation fleet, with solar alone accounting for nearly 6%. But the share of utility-scale photovoltaic capacity in the generation mix varies wildly across the area, from less than 1% in Kentucky to 16% in North Carolina. Florida has the fourth-largest operating solar portfolio in the U.S., but utility-scale photovoltaic capacity accounts for only 8% of the Sunshine State's generation capability. Of note, the U.S. Southeast operates a measly 235 MW of wind through only three wind projects, of which the 208 MW Amazon Wind Farm US East (Desert Wind Power), owned by Avangrid Renewables LLC, is the largest.

Renewable portfolio standards are notoriously absent in the states under review; only North Carolina has one in place. In the fight to curb carbon emissions, however, S&P Global Commodity Insights research shows that most of the interconnected utilities across the geography have publicly committed to CO2-reduction plans, aiming for net-zero carbon by 2050, although virtually all come short of specifying renewable targets. Of the top Southeast interconnected utilities surveyed, only American Electric Power Co. Inc., parent of Southwestern Electric Power Co., which operates in Arkansas and Louisiana, has a publicly announced renewables goal: achieving 50% renewables in its generation portfolio by 2030. 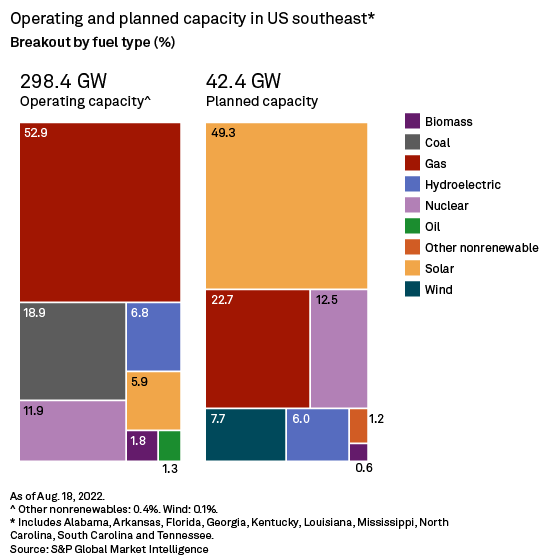 Renewables nonetheless dominate the region's capacity pipeline, making up almost 58% of the total, with solar alone coming in at nearly 49%. In absolute values, however, these lofty renewable percentages amount to a mere 24.4 GW, or only 7.7% of the overall U.S. renewables pipeline. The good news is that, unlike parts of the country that are ahead of the green-energy transition curve, such as California ISO and the Electric Reliability Council Of Texas Inc., the long runway to bring the U.S. Southeast renewable portfolio up to speed and maintain its CO2 emission reduction momentum is a boon for developers of renewable projects.

The geography may be lacking policy supporting the development of green energy, but it is rich in solar resources. Eight of the 10 states that make up the region are in the top 25 most insolated U.S. states based on average 20-year solar radiation data. The region's coastal states notably Atlantic Ocean-facing Florida, Georgia and the Carolinas also offer nonnegligible offshore wind potential. A May 18 Commodity Insights analysis of wind speeds for operating and planned offshore wind projects along the U.S. Atlantic façade shows the area to host the Kitty Hawk Offshore Wind Farm off the coast of North Carolina averaging 8.3 meters per second from 2000 through 2019. Finally, the U.S. Southeast is also moderately populated, offering ample open land for the development of utility-scale renewable projects.

Given these conditions, the region could prove a magnet for renewable developers looking to leverage clean energy production and investment tax credits from the Inflation Reduction Act. Ultimately, solar and wind energy laggards must be brought up to speed if federal emission reduction and renewable deployment goals, targets and triggers are to be met. The 10 states in this analysis will likely become an area of focus for the deployment of renewables.

The Inflation Reduction Act, signed into law by U.S. President Joe Biden on Aug. 16, includes $369 billion earmarked for clean energy development and other measures to fight climate change. It notably creates or extends production and investment tax credits around clean energy generation through at least 2032, removing uncertainties around tax credit extensions and expirations for at least a decade. The Inflation Reduction Act goes beyond promoting the deployment of renewables, however. It broadly incentivizes carbon-neutral sources of energy. This includes nuclear, with the law specifically seeking to extend the life of existing nuclear plants via a mechanism of production tax credits kicking in at the end of 2024 and going through 2032. 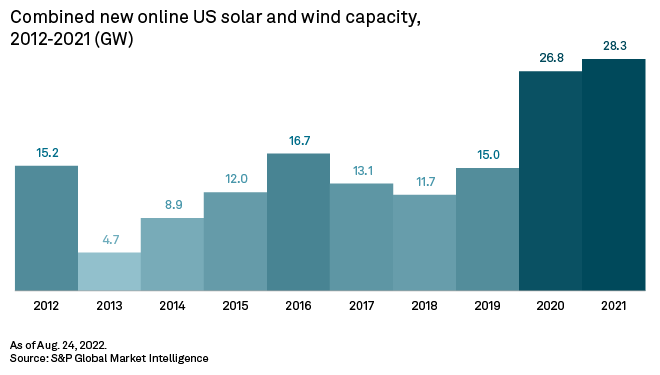 The Inflation Reduction Act tax credits are designed to phase out once emissions from the power sector fall to 25% of 2022 levels, though not before 2032. In an Aug. 10 preliminary analysis of the act, the power and renewables team at Commodity Insights estimated that the U.S. would have to build the equivalent of 1,200 GW of additional solar and wind capacity to meet the 25% trigger. In other words, the U.S. would have to deploy the equivalent of 120 GW of new solar and wind capacity each year over the next 10 years for the tax breaks to expire in 2032. For perspective, from 2012 through 2021, an average of 15.2 GW of combined solar and wind capacity came online each year in the U.S., based on Market Intelligence data.