Riding the tailwind of an increased digital adoption catalyzed by the pandemic, Asia's financial technology startups are raising funds at a pace faster than before. Large fintechs have embraced acquisitions as a mechanism for growth and the relative ease of raising cash could drive more M&A activity.

In the second quarter, privately held fintechs based in the Asia-Pacific region gathered $3.25 billion, up 40% sequentially. This brings total APAC fintech funding in the first half of 2021 to $5.56 billion, more than double the same period last year, and on track to top pre-pandemic levels.

In 2019, fintechs in APAC raised $9.30 billion. This means companies would need to raise just $3.74 billion more in the second half of the year to match pre-COVID-19 levels, a figure that seems attainable given the momentum of funding flows this year.

Deal volume followed a similar trend. Fintech fundraising volume grew 18% to 178 deals in the second quarter, lifting the number of transactions in the first half of the year to 329, or roughly two-thirds of 2019's full-year figure.

Checks with larger sizes have surged as well. Fourteen mega rounds, or deals with transaction size of $100 million and above, closed just six months into the year, surpassing the annual tally recorded in the past two years. 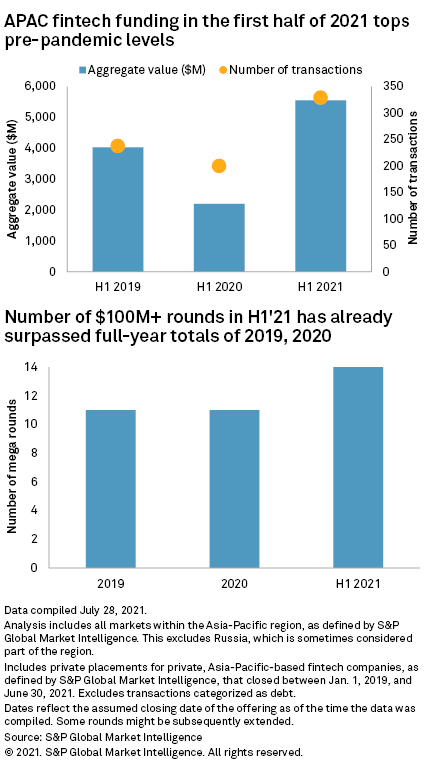 Fintechs with well-padded coffers on an acquisition spree

The generous flow of venture capital to mature fintechs have equipped them with the firepower to become acquirers as they seek to accelerate product and geography expansion. Just six months after the closure of its $100 million series D round, Razorpay Software Private Ltd. raised an additional $160 million from its series E round in April, which tripled the firm's valuation to $3 billion. Flush with fresh funds, the India-based payment gateway acquired TERA Finlabs in July to scale up its lending business. TERA Finlabs is a digital lending software-as-a-service provider and its technology stack and risk management capabilities can be integrated with Razorpay's solutions to enable a credit line for their merchant network. Razorpay is also on the lookout for other acquisition opportunities in B2B SaaS companies with core competencies in areas like accounting and expense management to strengthen its offerings to its merchant base.

NextBillion Technology Private Ltd., an online brokerage operating as Groww, has agreed to acquire the mutual funds business from Indiabulls Housing Finance for $23.6 million after raising $83 million in its series D round in April. The transaction, which is subject to regulatory approval, will fast track its entry into the asset management space after the Securities and Exchange Board of India eased the eligibility requirements for fintechs to own a mutual funds license last year. The acquisition will allow Groww to launch its own mutual funds and expand its revenue channel through management fees levied on the funds. The firm currently generates revenue by charging transaction fees on securities trading. 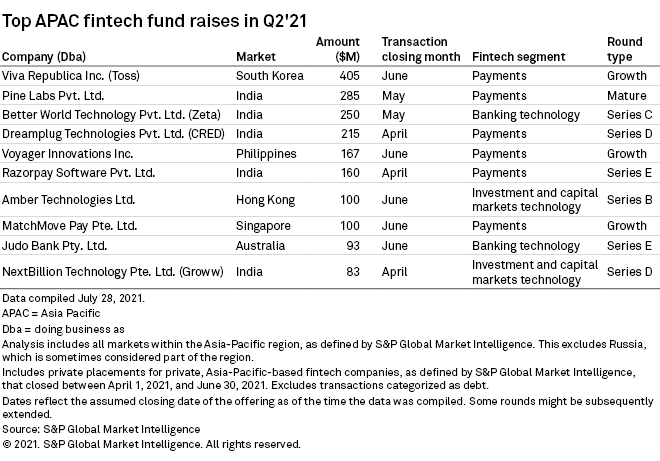 Southeast Asia has so far been an attractive destination for new market growth, drawing in the likes of Chinese fintech giants Tencent Holdings Ltd. and Ant Group Co. Ltd. Both firms have built a significant presence in the region by taking on strategic stakes in leading payment operators across the six key markets. Tencent's portfolio in Southeast Asia, for example, includes Gojek in Indonesia, Paymaya in the Philippines as well as Sea Ltd., which has a regional presence. Ant, on the other hand, had invested in Philippines' Mynt in the Philippines, Indonesia's Dana, Thailand-based TrueMoney, Vietnam's eMonkey, Malaysia's Touch 'n Go Sdn Bhd and Myanmar's Wave Money among others.

Mature Indian payment fintechs are looking to trod down a similar expansion path, albeit with a different approach. With large Chinese fintechs having already established strategic partnerships with large payment companies in Southeast Asia, Indian fintechs may instead opt to buy out smaller payment startups to accelerate their entry into the region.

In April, Pine Labs Private Ltd. acquired Malaysia-based Fave Asia Technologies Sdn. Bhd. in a $45 million deal. Pine Labs is a B2B payments company providing offline and online merchants with a range of payment acceptance methods and invoicing tools. Fave is a consumer payment app that helps offline retailers retain customers by providing merchant-specific cashbacks and discounts for purchases made via the app. Fave works with over 40,000 merchants in Southeast Asia, and the deal can help Pine Labs expand its merchant touchpoints in the region. The acquisition has also paved the way for Fave to launch in India by tapping on the merchant base of Pine Labs. In May, Pine Labs received $285 million as part of an ongoing fundraise with the round eventually closing at $600 million in July.

Razorpay has also announced its intent to broaden its reach to Southeast Asia. While it has not disclosed concrete plans, M&A could be a viable entry strategy as the payments sector may be a fertile ground for acquisitions.

Arguably the most mature fintech segment in APAC, the payments sector has consistently been drawing in the bulk of funding across the six fintech categories tracked by S&P Global Market Intelligence. However, funding has been flowing disproportionately to well-established firms.

In the second quarter, six mega rounds by mature fintechs accounted for 81% of the $1.65 billion raised by payment firms. Smaller payment companies that may have difficulty accessing financing in the competitive field could be a source of acquisition. 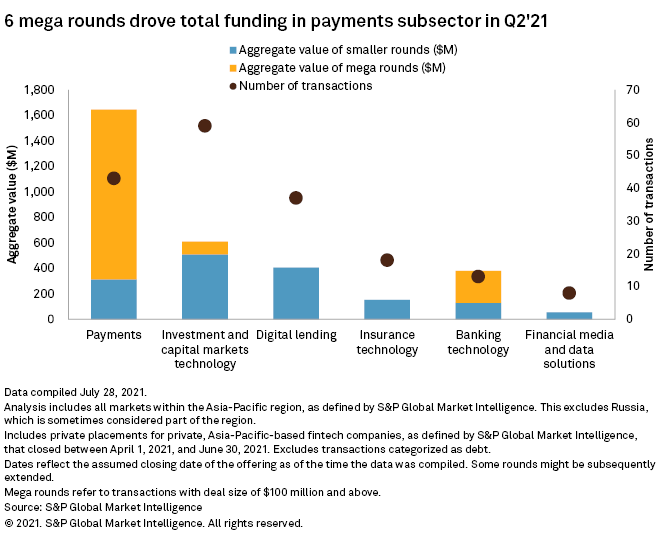 From digital wallets to digital banks

Viva Republica Inc., which does business as Toss, was the top-funded fintech in APAC in the second quarter with a $405 million capital raise. Toss has secured the final approval from South Korea's Financial Services Commission to launch the nation's third digital bank, which is slated to begin operations as early as September this year. The two other digital banks in Korea are KakaoBank Corp., which recently went public, and K Bank Co.Ltd.

Voyager Innovations, which operates PayMaya in the Philippines, received $167 million in June from returning investors, including Tencent and KKR & Co. Inc., and will be using part of the proceeds to venture into digital banking in its home country. The Philippines central bank is currently accepting digital banking applications and has so far awarded four licenses.

The growth pivot from digital wallets to digital banks is perhaps unsurprising as many of these large mobile payment apps have added on new financial verticals as they scale, and a bank license can help these payment operators better monetize their customer relationship.

Last year, we wrote that large regional electronic wallets could ride the digital banking wave in Southeast Asia and this has played out to some extent.

The joint venture of Grab Holdings Inc. and Singtel, which has secured a full digital bank license in Singapore, has submitted a virtual banking bid in Malaysia along with a consortium of investors. Axiata Group Bhd.'s Boost wallet has also applied for a license together with RHB Bank.

While Indonesia does not have a separate licensing regime for digital banks, large e-wallet operators like Gojek and Sea have acquired stakes in local banks to gain a foothold in the digital banking scene. Gojek purchased a 22% stake in Bank Jago while Sea bought Bank BKE.

Zeta, an Indian banking technology startup, bagged $250 million in a series C round led by SoftBank. The firm provides a cloud-based technology stack comprising a range of functionality for banks to launch digital native offerings while retaining their legacy core. It also offers a suite of APIs and SDKs for fintechs to embed financial services in their offerings.

Indian fintechs drew in $1.26 billion across 54 deals to top the APAC region in both funding value and volume in the second quarter.

Meanwhile, Chinese fintechs saw declining funding value and activity, attracting just $239.8 million across 16 deals in the second quarter, against $351.4 million across 21 deals in the prior period. Recent regulatory changes marring the listing prospects of Chinese tech companies may further weigh on fintech investments in the country going forward.

That said, the investment and capital markets technology sector could see some reprieve from a potential regulatory change that may see a relaxation of rules on overseas investments. In February, China's State Administration of Foreign Exchange said it was contemplating an easing of its capital control measures to allow citizens to invest in overseas securities and insurance with their annual $50,000 foreign exchange purchase quota. At present, this quota is limited to non-investment purposes.

In the second quarter, the investment and capital markets technology sector and insurtech sector saw the largest number of fintech fundraises in China with five deals each. Long Bridge Co. Ltd., an investment platform offering overseas asset allocation services, was the top-funded Chinese fintech. The firm raised $50 million in a pre-series A round in June. 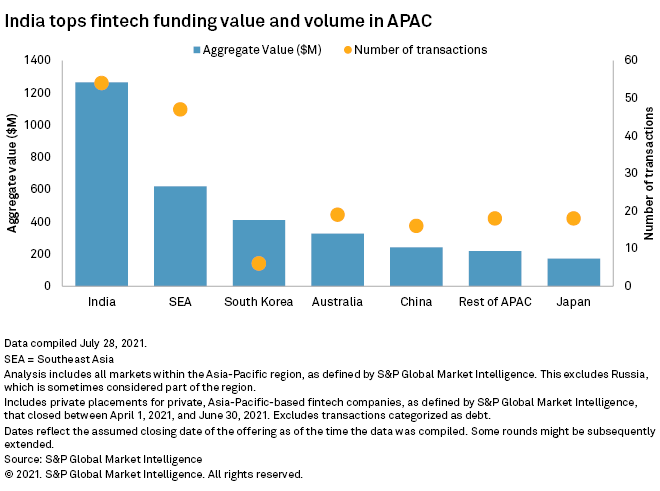