Streaming music and radio ad revenue will grow to nearly 4% of total U.S. online ad revenue in 2032, according to our projections.

A surge in paid music subscriptions along with the popularity of podcasting and improvements in ad insertion have led to an uptick in our streaming music and podcasting ad revenue projections for 2022-2032. 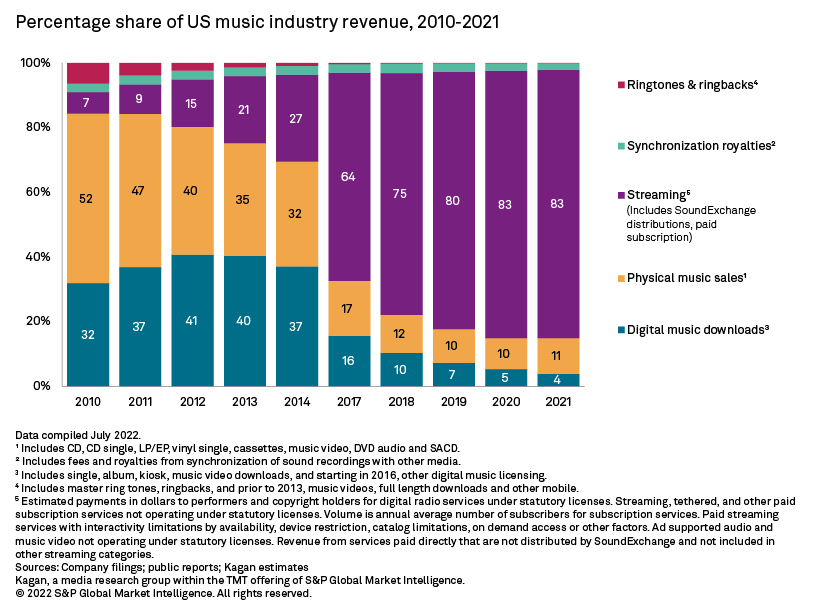 According to the Recording Industry Association of America Inc., or RIAA, total digital music sales grew 21.6% in 2021 to $13.03 billion, accounting for 83% of total music revenue — similar to its share of the industry in 2020.

The COVID-19 pandemic provided a listening boost to streaming music and podcasting as many consumers listened from home and may have contributed to a rise in subscription services. Paid subscriptions accounted for the largest share of total U.S. streaming music revenue, growing 23% to $9.5 billion in 2021, according to the "RIAA 2021 Year-End Music Industry Revenue Report."

Spotify founder, CEO and Chairman Daniel Ek on the company's second-quarter earnings call talked about the company outlook this year in the face of a possible economic downturn. As of the earnings call, the potential downturn was not causing the company to see any material impact on expectations for user or subscriber growth, according to Ek. Spotify has set its sights on a user base of 1 billion by the end of 2030.

CFO Paul Vogel said on the call that on the premium subscription side, which represents a majority of Spotify's revenue, the company expects average-revenue-per-user gains in the mid-single digits at the end of the third quarter.

Audacy said digital revenue grew 16% year over year in the first quarter, and the new, enhanced streaming platform helped increase supply and led the category to a 19% increase in the second quarter. In April, the company entered into an affiliate partnership with FOX News Audio to offer a linear and interactive stream on the Audacy platform.

Despite a softening of some ad categories in 2022 and perhaps beyond, streaming audio platforms appear positioned for growth as a main source of music and the increasingly popular podcast category. Advancements in advertising efficiency and audience measurement, along with significant content investments, should help drive the segment's continued ad revenue growth over the next 10 years.

Don't be a follower. Set the trend with essential TMT intelligence.