In September, macroeconomic news of inflation — energy and otherwise — and interest rate hikes by several central banks to mitigate the fallout in their respective economies amid the increasing likelihood of a global recession dominated headlines. The U.S. dollar spiked as the Federal Reserve tightened its monetary policy, weighing on precious metals prices. Despite tight market fundamentals, with most industrial metals output constrained by high energy prices, consensus price forecasts for the remaining months of 2022 and for 2023 were downgraded as demand concerns carried sway. Copper prices were the most revised down for each year through to 2026, while cobalt prices for 2024-2025 were significantly bumped up. 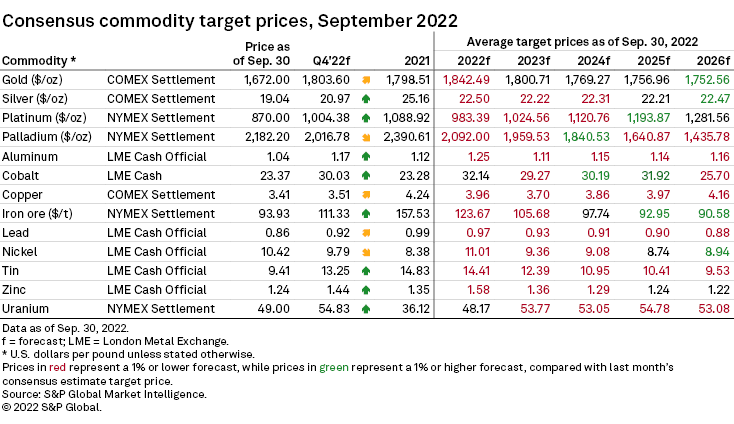 September was characterized by more significant interest rate hikes to combat inflation in major economies as central banks became increasingly concerned by the possibility of a global economic recession in 2023. This makes for a gloomy macroeconomic backdrop that has been a major force acting on commodities markets recently, outweighing the influence of fundamentals, while stocks have generally trended downward since the beginning of the year. An 8.3% increase in the U.S. consumer price index in August — contrary to market expectations — further underpinned the tightening monetary policy of the U.S. Federal Reserve, which lifted rates by 75 basis points at their September meeting. On the cards is the possibility of further interest rate hikes in November, should the Fed strive to meet its 2% inflation target rate.

The Bank of England's efforts to rein in inflation have encountered local resistance from the U.K. government's recently announced fiscal policy, just as the consumer price index fell for the first time in almost a year in August from July's 40-year high. The respite is expected to be brief, however, on the double threat of an energy tariff cap and the new government stimulus. The European Central Bank and the central banks of Norway, Sweden and Switzerland also raised rates in September, as inflation in the eurozone reached 10% — the highest since the inception of the euro.

Further indicative of slowing economic growth, purchasing managers' index, or PMI, readings in September were lower month over month in the eurozone, including Germany, going deeper into contractionary territory. In China, mixed readings breathed some optimism into the economy, which was impacted during the month by a COVID-19-related lockdown in Sichuan province's capital city, Chengdu. Although the Caixin PMI contracted further, the National Bureau of Statistics PMI edged into expansionary range, helped by a resumption in factory and construction activity as various stimulus efforts came into effect. 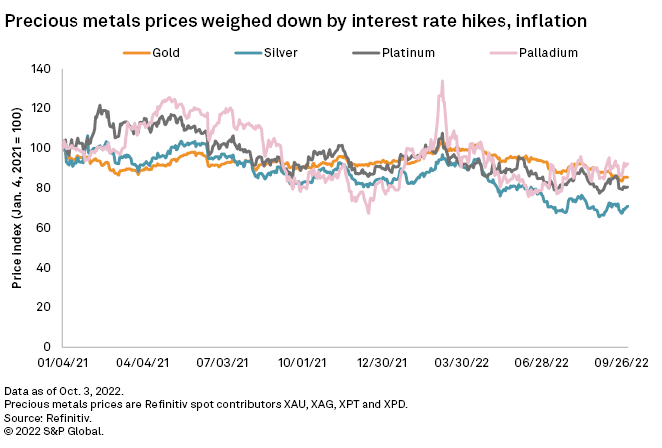 Gold has been the unexpected loser of the current macroeconomic environment, with its safe-haven status in direct competition with the U.S. dollar. While market volatility should favor the yellow metal, increasing treasury yields and a strengthening U.S. dollar, on the back of interest rate hikes, weighed on the gold price. The London Bullion Metal Association gold price fell to a 2.5-year low of $1,663 per ounce on Sept. 20, one day before the Fed meeting, while the 10-year Treasury real yield reached 1.17% and the trade-weighted index of the U.S. dollar reached another 20-year high after the meeting. Consensus price forecasts for gold remain positive, however, with an average upgrade of 0.4% annually through 2026, emphasizing its importance to investors in the face of economic uncertainty and rising geopolitical risks.

The silver price ended September higher than it started the month, enjoying a slight respite in an otherwise volatile market. With most industrial activity pressured by the weakening economy, demand for silver will likely remain subdued, and so will the price. Consensus forecasts have been downgraded by an average of 2.3% annually through 2026, despite some optimism for the long term. Despite the expected near-term weakness, the silver price is expected to remain broadly stable through to 2026, averaging $22.34/oz.

Like silver, palladium and platinum prices generally trended upward over the month, despite daily volatility in lockstep with macroeconomic events. The palladium price shows some strength among the other precious metals covered, trading near year-start levels. Nevertheless, the current macroeconomic environment weighs on the price expectations for palladium and platinum, superseding the influence of shifting demand from the former to the latter for automotive applications and the lingering impact of the Russia-Ukraine conflict on palladium supply. Consensus price forecasts for both were downgraded about 3.0% annually across the forecast period. 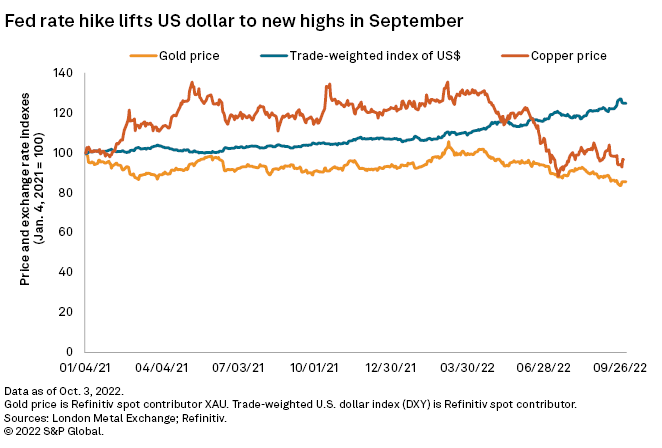 The London Metal Exchange, or LME, zinc cash price slipped below $3,000 per tonne in September, as the metal price remained on a downward trajectory over the month. Despite support from low stocks and constrained refinery activity on the back of high power prices in Europe, slowing manufacturing trends weighed on the zinc price. With demand subdued and unlikely to pick up, given the looming possibility of a global economic recession, consensus zinc price forecasts have been downgraded across 2022-2026, with the largest revision of 4.0% to the 2023 price.

The price of copper — the bellwether of the global economy — was volatile in September as it closely tracked economic events. The LME copper cash price briefly peaked above $8,200/t midmonth as the market displayed the biggest backwardation since November 2021 before dropping below $7,500/t on news of another interest rate hike in the U.S. Strong macroeconomic headwinds, including woes in the U.S. property sector and China's still-struggling economy, suppress demand and sour sentiment, which counters the tight physical market. Expectations for the copper price have been revised down the most among the commodities discussed, with an average annual downgrade of 7.4% across the forecast period, with a 12.2% reduction to the 2023 price.

In stark contrast to most commodities covered, September was a positive month for nickel, with the LME cash price hitting its highest since June. The midmonth peak was due to short covering in anticipation of U.S. August inflation data. The 8.3% headline inflation, however, proved disappointing, and the Fed rate hike later in the month prompted a drop in the nickel price. Further indicative of the dire energy situation in Europe and China, stainless steel producers cut back output during the month. Despite low supply, we expect the broader inflationary environment that is muting demand to weigh on prices. Consensus price forecasts for nickel have been lowered annually from 2022 to 2025, although the 6.4% and 7.1% revisions for the 2022-2023 prices, respectively, are much sharper than those for 2024-2025. 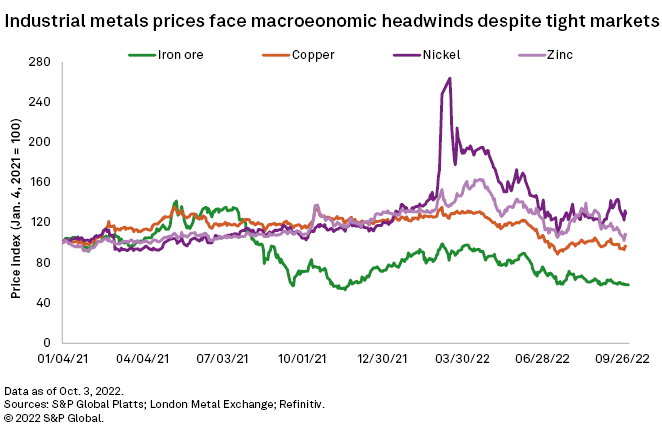 The LME cobalt cash price stabilized in September as demand weakened and supply flow improved, namely from the Democratic Republic of Congo. As inflation weighs on consumer spending, end-use demand from the electronics sector has been subdued, while battery-makers have been drawing from existing inventories, resulting in fewer orders for cobalt. The price correction from the January high, however, could protect demand, alleviating pressure on battery developers to eliminate cobalt from their battery chemistries. Consensus price forecasts for cobalt buck the general trend for the other commodities, with substantial upgrades of 8.5% and 19.7% to the 2024 and 2025 prices, respectively, possibly reflecting expectations of the market turning into a deficit in 2025.

The S&P Global Platts IODEX 62% Fe iron ore price was among the worst performers of the month, barely recovering from the 10-month low of $95 per dry metric tonne reached Sept. 2 despite an uptick midmonth when property developer China Evergrande Group announced it would resume construction at its stalled projects. A seasonal upturn in China's real estate sector and government support in the form of infrastructure grants is nevertheless failing to support iron ore prices, as China's economy still struggles to recover from COVID-19-related lockdowns in major industrial hubs. Consensus price forecasts have been revised down an average of 2.2% annually through 2024, although prices are expected to average above current levels.