Combined Apple Inc. product shipments estimated by Kagan grew by 1.1% year over year in the third calendar quarter of 2022 as more than 100 million devices shipped. Chip shortages have eased, and this was a boon especially for the Mac segment, which was significantly affected by this in preceding quarters. However, global macroeconomic factors, particularly currency exchange headwinds, raised retail prices of Apple's products and continued to negatively impact consumer demand.

The iPhone segment shipped an estimated 0.6% more smartphones year over year in the third quarter of 2022, which is a far cry from the 16% year-over-year growth achieved in the third quarter of 2021. While this is partly a reflection of the lukewarm interest in the iPhone 14 lineup, which launched at the tail end of the quarter, it is also symptomatic of the imminent saturation of the Chinese smartphone market. Given the importance of the iPhone as a gateway product into the Apple ecosystem, other product segments could follow a slowdown of iPhone shipments to the Chinese market.

New product releases in September helped drive year-over-year shipment growth among the iPhone, AirPods and Watch product segments. In contrast, the HomePod and Apple TV segments have not released a new device since 2020 and 2021, respectively. These product lines' aging hardware may be struggling to compete in the competitive smart speaker and streaming media device markets.

For the most part, much of the severe supply chain bottlenecks and production stoppages experienced in past quarters had eased by third quarter 2022. However, some supply constraints still affected specific products, such as the iPhone 14 Pro and Pro Max and the Apple Watch Ultra, which likely held Apple back from fully capitalizing on the burst of demand for those particular items. 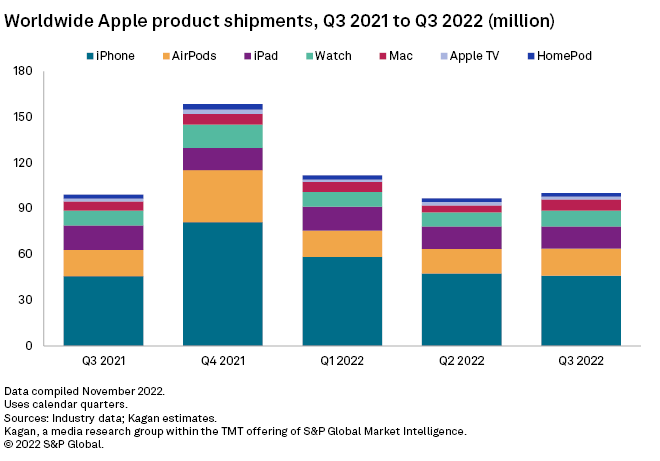 As Apple no longer reports device shipments, Kagan's quarterly Apple reporting provides estimates of company shipments based on business unit revenues, supply chain information and proprietary shipment and market share tracking models. Our model is based on calendar quarters that begin in January, instead of Apple's fiscal year, which begins in October, such that all mentions of "quarter" refer to calendar quarters unless otherwise specified. Apple devices tracked in this quarterly update include the iPhone, Mac, iPad, Apple Watch, AirPods, Apple TV and the HomePod.

A good quarter for the iPhone segment was marred by the lukewarm response to Apple's new iPhone 14 lineup, which contributed to the weak 0.6% year-over-year growth in estimated smartphone shipments. The new devices were largely perceived as having very minor upgrades over their predecessors, even more so than usual.

The iPhone 14 Pro and Pro Max both received Apple's latest A16 Bionic chip, an improved main camera, an always-on display feature and a new widget that Apple calls the Dynamic Island. In contrast, the base iPhone 14 is almost literally a repackaged iPhone 13: It comes with practically the same components as its predecessor, even last year's A15 Bionic chip, which is unprecedented.

The iPhone 14 Plus is, essentially, an iPhone 13 with a larger screen and a bigger battery. However, it starts at an awkward $929 price point, which is the same price as an iPhone 14 with double the storage capacity. And for just $70 more, the customer could instead get the iPhone 14 Pro.

The launch of the new smartphones included a change-up of the price structure, which seems intended to drive consumers to upgrade to the Pro models. Indeed, the estimated proportion of Pro models among total smartphone shipments in third-quarter 2022 nearly doubled year over year, driving up the estimated average selling price to $927, up 8.3% over last year.

Although the iPad segment is on its fourth consecutive quarter of year-over-year shipment declines, third-quarter shipment volumes, estimated at negative 9.5% year over year, are still significantly higher than the pre-pandemic quarterly average from 2015 through 2019. 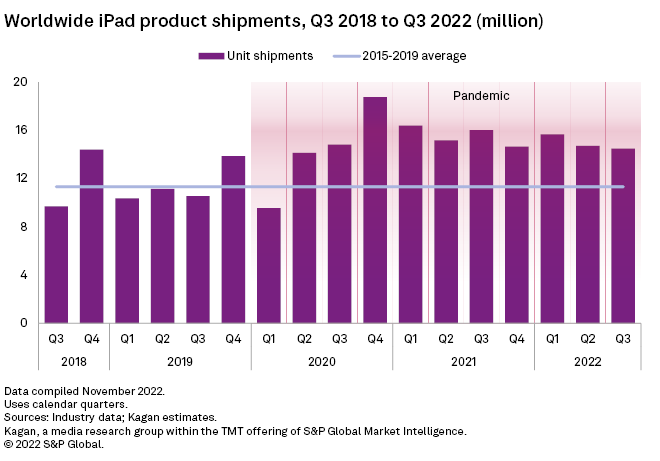 There is also a problematic comparison against the year-ago period due to the timing of new iPad releases. Two new iPad Pro models came out in May 2021, and the ninth-generation iPad and the sixth-generation iPad mini were introduced in late September 2021 — all of these contributed to the 16 million units shipped during third quarter 2021.

In contrast, new releases in 2022 had less impact on third-quarter 2022 shipments because they were earlier, such as the fifth-generation iPad Air released in March 2022, or later, like the new 10th-generation iPad and the two new iPad Pro models that showed up on store shelves in October 2022.

Foreign currency headwinds that hiked up pricing in international markets also contributed to curbing some of the demand, which itself is already waning comparatively after the pandemic boost in 2020 and 2021.

Mac shipments grew an estimated 21% year over year as the Mac segment benefited significantly from the easing pressure on chip supply and the reopening of Shanghai in mid-June, allowing it to fulfill second-quarter back orders and fill in channel inventory for back-to-school campaigns. The new M2-equipped MacBook Pro and Air released at the tail end of the second quarter also helped drive the third-quarter reversal.

Apple streaming media device, or SMD, shipments fell 4.6% year over year to 1.7 million as the newest Apple TV, which turned a year old in May, lost traction with consumers. However, temporary discounts at retailers such as Costco and Amazon buoyed sales somewhat.

The third-generation Apple TV 4K starts shipping in November for $129, down from the $179 price tag of the second-generation Apple TV 4K, which launched in May 2021. The lower launch price puts Apple's SMD in league with the Fire TV Cube and Roku Ultra. We anticipate the aggressive pricing strategy will lift sales in the fourth quarter. 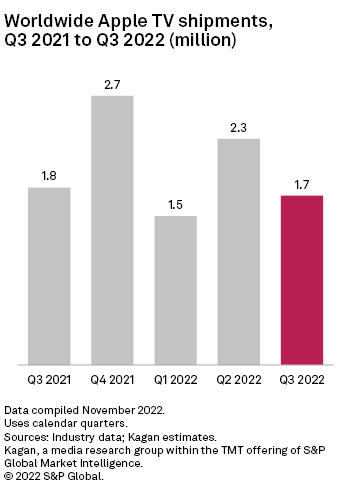 Shipments of the Apple Watch rose during the quarter, boosted by sustained global demand for smartwatches combined with the release of new products. Apple Watch products shipped an estimated 10.3 million units, an increase of 12% in comparison to the second calendar quarter of 2022. Shipments also increased by 7.3% year over year, as third calendar quarter 2021 shipments came in at an estimated 9.6 million units.

Apple's new Series 8 smartwatch, released in September 2022, is priced at $429 and features two new capabilities: temperature sensing and crash detection. The Apple Watch Ultra is a new product, targeted at extreme sports enthusiasts and hikers. The Ultra offers a larger screen, improved battery life and customizable workout and navigation features. The basic version of the Ultra is priced at $799.

For the third consecutive quarter, Apple highlighted how its smartwatch products continue to make inroads with new buyers. Apple again noted that two-thirds of all sales during the quarter went to consumers who previously did not own an Apple Watch.

Increased demand for AirPods during the quarter was likely driven by two market dynamics: a good quarter for iPhone shipments, which often produces a "carry-along" effect on quarterly demand for AirPods, and the late September release of the second-generation AirPods Pro.

The new AirPods Pro product, priced at $249, has basically the same design as the older first-gen AirPods Pro but offers a few key improvements. These include improved noise cancellation capabilities, better sound quality and a modest improvement in battery life. Another feature upgrade is the ability to adjust the volume directly on the earbud stem. 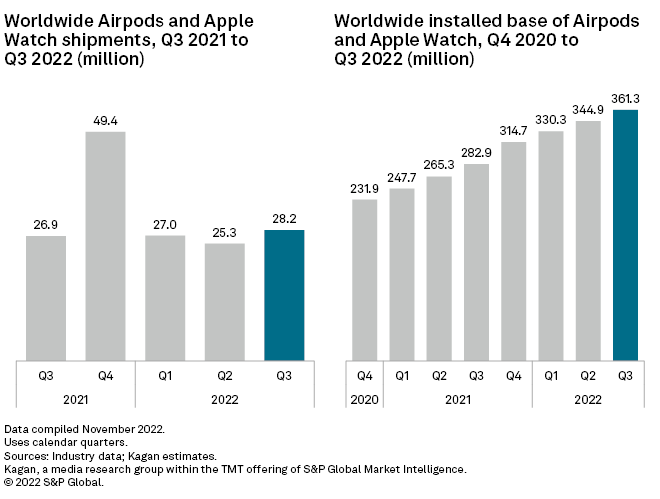 While Apple's HomePod mini smart speaker is largely viewed as both a solid product and a better value than the original HomePod, it continues to be a bit player in a smart speaker market dominated by Amazon and Google. Released in November 2020, the HomePod mini is priced at $99.

Apple's global installed base grew 9.9% year over year to just over 2 billion, with growth fueled primarily by its wearables division as well as its mainstay iPhone and iPad segments. The iPhone is Apple's bread and butter: It brings in the biggest share of total product revenue and also acts as the ambassador to the Apple ecosystem as it draws users to pick up other Apple devices.

Apple's latest iPhone 14 lineup, at least what is sold in the U.S., has lost a feature seldom talked about because it is taken for granted: the physical SIM card slot. A physical SIM allows a user to quickly switch between different carriers by simply changing the SIM card loaded onto their devices. This feature also allows a user to easily switch to a different phone.

On the other hand, embedded SIM technology, which the U.S. iPhone 14 models exclusively use, requires some coordination between carriers and smartphone manufacturers. While it is a minor trifle to move from one phone to another from the same brand, it becomes a complicated process that involves coordination with the carrier when moving across phones from different brands.

That extra friction is expected to help keep U.S. iPhone 14 users from switching away from iPhone when they eventually replace their smartphones. If, and when, Apple moves in this direction for all iPhones sold worldwide in the future, it could make a significant impact on retaining repeat iPhone buyers to prevent its iPhone installed base from shrinking. 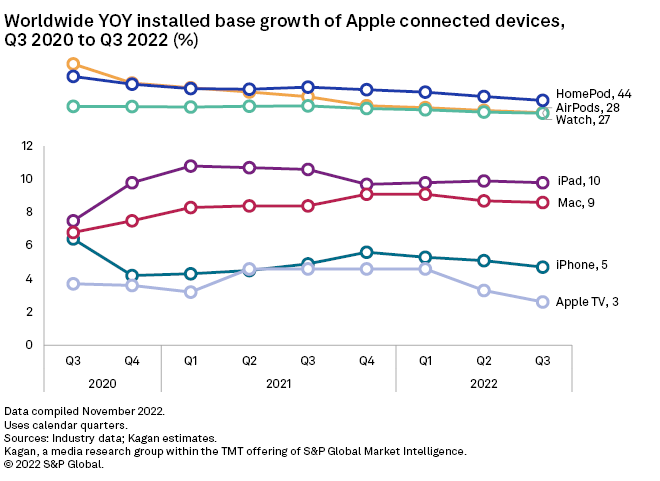 This article is part of a recurring, quarterly series of articles covering Kagan's estimates of Apple product shipments.