A nationwide push for green energy could strand $68B in coal, gas assets


A nationwide push for green energy could strand $68B in coal, gas assets

While the past decade has seen U.S. electric sector carbon emission declines, attributable mainly to the substitution of coal generation with natural gas generation, recent pricing trends indicate further emissions reductions via this avenue are unlikely. More recently, the advancement of renewable mandates and regulatory support for retiring coal generation in parts of the country indicate that a new round carbon emissions reductions are on the horizon. However, to meet ambitious decarbonization targets such as those in the Biden administration's Clean Energy Standard, green energy will need to expand much more rapidly. This push could reduce the value of recent investments in pollution control equipment at coal plants. Furthermore, a review of markets with strong renewable mandates and carbon emissions pricing indicates much of the U.S. fleet of recently built natural gas generation could come under pressure as well. Market Intelligence estimates that $34 billion in coal plant investment and another $34 billion in new gas plant construction could be at risk.

Coal generation, once the linchpin technology in the U.S. power sector, has seen its share of the overall electricity supply steadily decline for several decades now as the presence of natural gas and renewables has increased. As of 2020, coal accounted for 19% of the overall electricity share in the country, falling below renewables for the first time. As environmental awareness and regulations increased, many coal plants could only continue operating by retrofitting to address sulfur dioxide, nitrogen oxide and mercury emissions.

According to the S&P Global Environmental Project Database, over 100 coal power plants totaling 130 GW – more than half the existing U.S. coal-fired fleet – have undergone or are planning to undergo environmental retrofits in some form. Market Intelligence estimates the total capital cost of these projects to be nearly $34 billion. The financial hit of different types of retrofits can vary substantially but retrofits on larger plants to address multiple types of emissions can cost well over $1 billion. 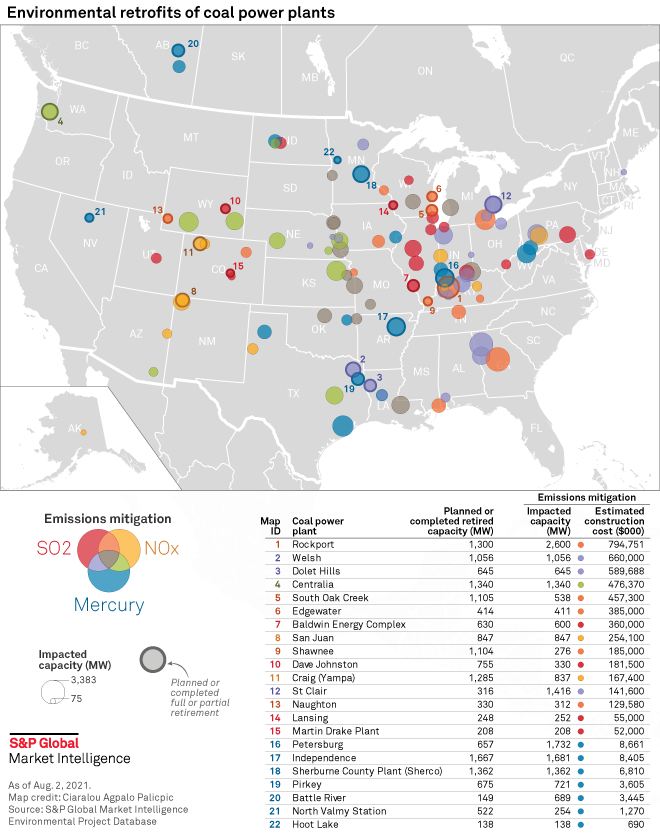 Now, with the energy transition expected to continue to ramp up, the costs sunk into these coal plants risk being stranded. Retrofits reduce several types of emissions but the most notable — carbon dioxide — does not currently have a financially viable solution to address it. As CO2 emissions restrictions from multiple corners of the industry continue to increase, these coal plants are increasingly at risk. In fact, 22 coal plants that have undergone environmental retrofits costing over $3.5 billion are already tagged for partial or complete retirement. This trend is expected to continue.

The locations of these environmental retrofit projects are scattered across much of the interior and southern U.S., with a notable concentration in the Midcontinent ISO and PJM Interconnection. As the economic pressure on coal plants continues to increase, so too does the risk of the costly investment in many of these plants. While natural gas has been the heir apparent to the shrinking coal fleet, the rapidly increasing push for a clean energy transition is beginning to highlight the growing risk to these assets as well – particularly in regions ahead of the curve in renewable and carbon pricing legislation.

La Paloma Generating, a combined-cycle gas power plant operating in northern California since 2003, ran 73% of the time in 2014, a headline indication of its value as a competitive gas-fired resource in the market run by the California ISO. By 2016 the plant's utilization had fallen to 47% and the plant's owner declared bankruptcy, citing depressed power prices due to increased penetration of solar generation and carbon emissions costs under California's cap-and-trade program. These factors depressed the plant's operating profit margins to the point that it could no longer service debt. Still in receivership, La Paloma's annual capacity factors have fallen below 20% since 2018.

While CAISO's market structure has faced criticism for failing to support merchant generation, the La Paloma experience may play out across several markets in the Eastern U.S. which combine rapidly expanding green generation with increasingly robust carbon pricing mechanisms. The natural gas generation fleet, once seen as a key enabler of decarbonization through its replacement of coal plants, may instead become a source of stranded investment, itself displaced by green generation.

From 2019 to the first half of 2021, states from the mid-Atlantic to New England have enacted or augmented Renewable Portfolio Standards or RPS, which drive growing investment in green energy including wind (onshore and offshore), solar and other emissions-free generation. As these facilities interconnect to the organized markets of PJM, the New York ISO and the ISO New England, they have similar effects on wholesale electricity prices to earlier solar penetration in CAISO. 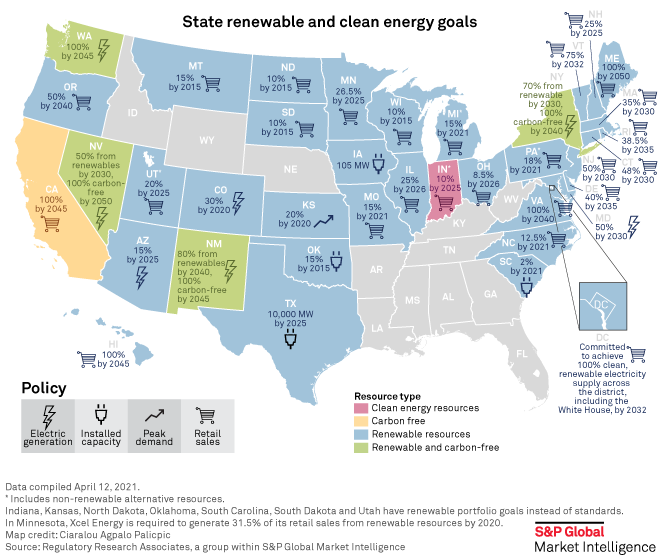 States along the Eastern seaboard currently have in place goals to reach 50% to 100% carbon emissions-free generation with milestone deadlines 2030-2035. Additionally, 11 states participate in an electric sector carbon emissions cap-and-trade program, the Regional Greenhouse Gas Initiative that increases costs of fossil generation whether coal or natural gas. Two additional states in PJM may join RGGI in the next year.

Taking these factors into account, Market Intelligence forecasts a challenging investment environment for new combined-cycle generation over the next 10 years. Even with contributions from energy margins, known as spark spreads, and capacity revenues, much of the PJM combined-fleet will earn just enough to service debt through the low cycle of capacity payments in 2022. 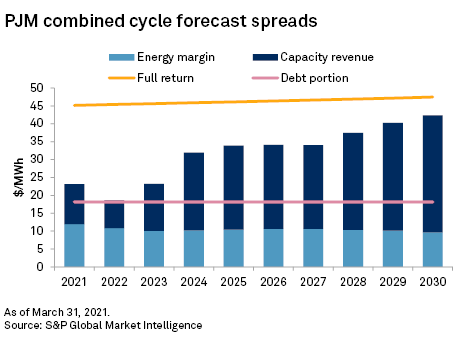 Market Intelligence expects PJM's auction markets will be sufficiently supportive for the typical merchant combined-cycle gas turbine, or CCGT, plant to service debt, but energy margins are forecast to remain flat. If the renewable fleet expansion picks up speed and carbon pricing becomes more widespread, those margins may come under further pressure.

ISO-NE is a much smaller market by electricity demand than PJM, in which all its constituent states have rapidly increasing RPS and full RGGI participation. These factors lead to both substantially lower spark spreads and a weaker forecast of capacity payments, with forecast spreads indicating distress potential for many CCGT plants. 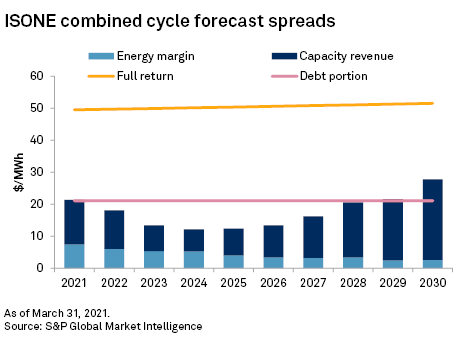 Market Intelligence estimates that in ISONE a new CCGT needs to earn a minimum spread of $21/MWh from its energy production and capacity revenues. Under the current Market Intelligence forecast for wholesale electricity and capacity prices, this spread is realized only three years out of the next 10, with an average revenue contribution closer to $18/MWh during that time, potentially inadequate to service debt.

The economic outlook is worse still for merchant CCGT in NYISO, where new capacity moved forward in part to replace both retiring coal and the Indian Point nuclear plant. Market Intelligence estimates that higher construction costs create a higher-hurdle service in NYISO, requiring a minimum spread close to $35/MWh. Near-term spreads fail to achieve this level in the Market Intelligence forecast, and energy margins are forecast to fall to zero after 2025 due to the squeeze created by expanding green energy and RGGI pricing. NYISO appears most likely to experience reduced operations from CCGTs and attendant financial distress. 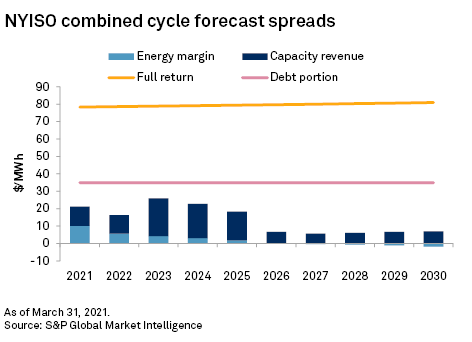 How much CCGT capacity may be at risk?

From project to project, headline forecasts of contributing revenues and annualized costs can obscure details that contribute to a stronger or weaker economic outlook. In PJM much of the new merchant CCGT fleet is located closer to economically priced natural gas and farther from the epicenters of green energy growth on the Eastern seaboard.

Accounting for these factors, Market Intelligence estimates 20,000 MW of CCGT capacity across these ISO markets, representing 20% of the fleet, are at risk of becoming stranded assets under current policies and market conditions.

A more rapid push to decarbonize would create bigger risks. Market Intelligence estimated the impact on fleet capacity factors of targeting 80% green generation by 2030 across all three ISOs. This target is consistent with interim targets of the federal Clean Energy Standard, or CES, currently under consideration. Forecast reductions in fleet utilization in NYISO and ISO-NE show only modest reductions because current targets are relatively aligned with the CES. On the other hand, PJM would see much larger impacts, as RPS targets for New Jersey, Maryland and Virginia were applied across all PJM states. 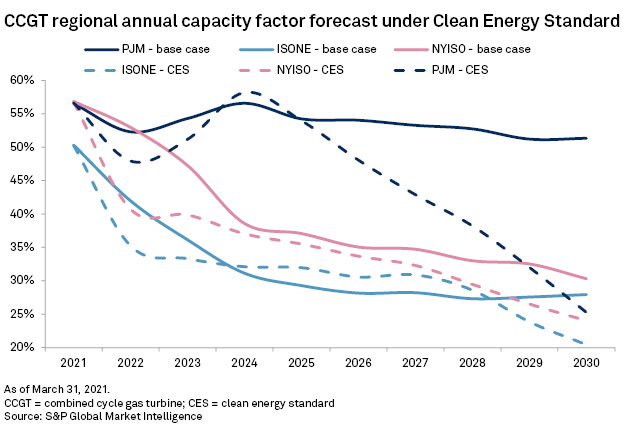 Reductions in utilization to half of current levels would reduce gross energy margins, putting additional CCGT capacity at risk.

The advance of green energy technologies performance and cost enables the pursuit of relatively cost-effective carbon emissions reduction mandates. But decarbonization may put existing generation investment at risk. Under current policies and market conditions, Market Intelligence estimates 13% of the U.S. CCGT fleet will come under economic pressure by 2030, totaling 20,600 MW across PJM, NYISO and ISONE, and 33,700 MW altogether. This represents about $34 billion in investment, a value likely to grow if larger parts of the country are subject to renewable mandates or decarbonization targets.