5G commercial rollouts accelerated in the past year despite disruptions due to the COVID-19 pandemic, reaching 158 local operators with active networks in 67 markets worldwide as of March 2021.

The COVID-19 pandemic derailed the 5G timeline of many operators and regulators worldwide, primarily through postponed or canceled spectrum auctions and restrictions on tower building. Nevertheless, more commercial 5G launches happened in 2020 than ever before. At least 36 launches occurred in the first half of the year, followed by 56 launches in the latter half. Seven more launches followed as of March 2021.

Other large operators with an extensive 5G footprint include Deutsche Telekom AG (nine markets, including T-Mobile US Inc. in the U.S.), Telefónica SA (as Telefónica, Movistar, O2 and Vivo in five markets), Orange SA (in four markets) and Telia Company AB (publ) (also in four markets).

At least two operators have deactivated their 5G networks after launch: Sprint Corp. in the U.S. (absorbed into T-Mobile's 5G network in July 2020) and Telma Mobile in Madagascar (suspended by the local regulator in July 2020).

Mid-band spectrum for 5G has gained the widest acceptance worldwide, due to its good balance between coverage and capacity and also because of its adjacency to legacy 4G spectrum bands and the availability of large contiguous bandwidth. Out of the 167 commercial 5G networks in our list, 154 have used mid-band spectrum. This is quite impressive when compared to only 34 that use low-band and 26 that use millimeter wave, or mmW, spectrum.

Of the commercial 5G networks on our list, 105 have used 3.5 GHz, making it the most popular mid-band 5G spectrum worldwide. Pioneer 5G markets in the Asia-Pacific, Europe and the Middle East favor 3.5 GHz. North America is an exception, where 600 MHz and mmW spectrum are more popular for 5G. This may change soon, especially after the U.S. successfully auctioned 3.5 GHz licenses in August 2020 and 3.7 GHz in March 2021. 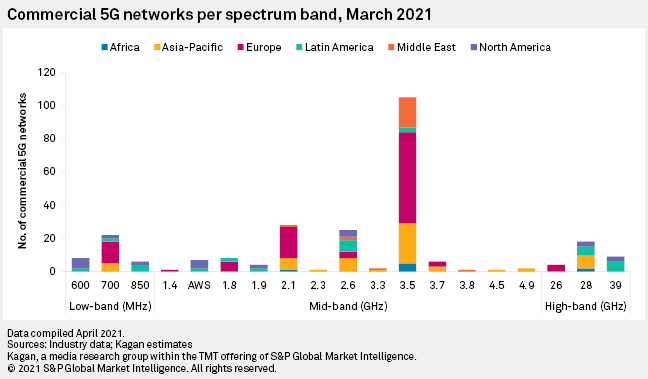 One interesting development in 2020 was the increased adoption of dynamic spectrum sharing, or DSS, for 5G. DSS technology allows the deployment of 5G networks alongside earlier generation networks on legacy spectrum bands even if they are not officially designated for 5G.

We expect that DSS deployments will only be a temporary measure while some operators await the awarding of official 5G spectrum since spectrum bands used for them are not internationally standardized.

According to our data spanning from December 2017 to April 2021, Telefonaktiebolaget LM Ericsson (publ) and Nokia Corp. have the largest footprints worldwide in terms of total 5G trials and launches. 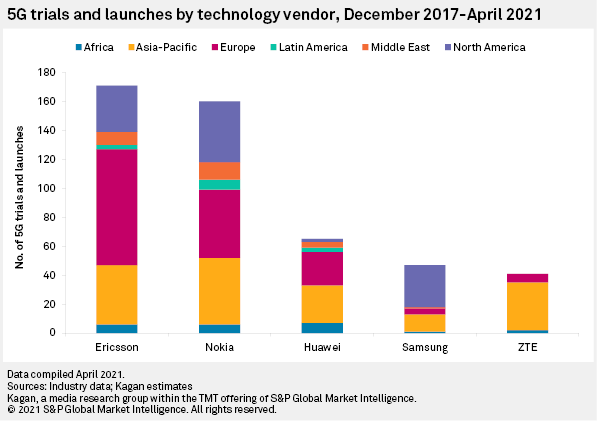 In terms of sheer small cell shipments, Huawei Technologies Co. Ltd. is the leader, as discussed in our fourth quarter 2020 market share report. However, Huawei's leading position is bolstered substantially by its dominance of its Chinese home market, where small cell shipments dwarf those of other markets.

Due to geopolitical pressures, Huawei's global customer footprint actually receded in 2020, based on its February 2020 claim of 91 commercial 5G contracts. At Huawei's recent Global Analyst Summit, the vendor cited 50 commercial 5G contracts but also claimed to have built over 140 5G networks worldwide, in 59 countries. So, there is a bit of 'hedge room' for interpreting Huawei's customer count — as there is with other systems vendors — given varying definitions of commercial contracts, deals, and agreements vs. deployments. However, the only major, publicly-disclosed 5G implementation by Huawei outside of China in the past six months was with an existing Huawei customer, Russian operator Mobile TeleSystems PJSC.

In contrast, Ericsson had a banner year on the 5G customer acquisition front. As of April 2021, Ericsson claimed 136 commercial 5G contracts, including 85 live networks in 42 markets. Ericsson's global presence has expanded substantially since it reached the 100 commercial contract milestone in August 2020, thanks to customer traction in every global region. This includes mainland China, where Ericsson is effectively the only major western supplier of 5G solutions that will continue to pursue new business in the Chinese market.

Ericsson's persistence in China contrasts with that of Nokia, which in 2020 decided to limit further exposure in China due to the degree of difficulty in competing primarily with home market vendors, which limited Nokia's ability to be profitable in this market. But outside of China, Nokia also generated increasing traction in the global 5G infrastructure market during 2020 and first quarter 2021. As of April 2021, Nokia claims 160 commercial 5G deals, more than 220 commercial 5G agreements and 63 live networks supported. This includes 84 5G contracts with service providers: 13 in the Americas, 38 in Europe, 24 in Asia-Pacific and nine in Africa.

After Huawei, Ericsson and Nokia, ZTE Corp. and Samsung Electronics Co. Ltd. account for the remainder of the global 5G systems shipped into (and deployed in) wireless operator networks. While ZTE faces the same geopolitical hurdles as Huawei, and as such its global customer footprint is limited (to an estimated 50 commercial 5G contracts), Samsung has come on quite strong over the past three quarters.