In terms of cumulative 5G small cell shipments, Huawei Technologies Co. Ltd. remains the overall market leader, due almost entirely to the company's success in its home market in China.

* The 5G frenzy has calmed down as many markets worldwide have already implemented commercial 5G services. Expensive capital expenditure requirements and the current adverse economy are just some of the many factors slowing down the deployment of new 5G networks, especially stand-alone 5G.

* Ericsson and Nokia remain the top systems vendors in terms of publicly disclosed customer relationships with more than 200 5G commercial launches and trials each. However, Huawei claims the top spot in terms of total 5G small cell shipments to date (the second quarter of 2022), thanks primarily to its leadership in China, the world's largest single market. 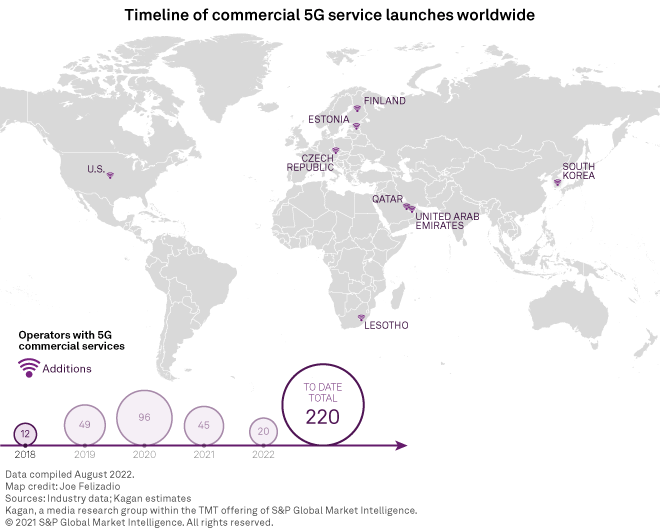 Markets that got their first commercial 5G service in 2022 include Botswana, Guatemala, Lithuania, Malaysia, North Macedonia, Reunion and Zimbabwe. With most of the developed world having launched 5G networks in some capacity, there are markets in several regions that have yet to see mass-market commercial launches, namely those in Africa and Central Asia, as well as Russia and India. Poor network infrastructure and late adoption of 4G are among the reasons that some markets in these regions have not yet launched commercial 5G — although trials and spectrum releases are already underway in some.

Two operators with large global 5G footprints, Vodafone Group PLC and CK Hutchison Holdings Ltd., have not yet made new commercial launches in less-developed markets as they focus on monetizing their existing 4G/LTE and/or previous-generation cellular network deployments. Other multinational operators seem to be slowly catching up, such as Orange SA with two new launches in Belgium and Réunion; Altice Europe in the Dominican Republic and Portugal; and Telia Company AB in Lithuania. We may see multinational operators in Latin America such as América Móvil SAB de CV and Millicom International Cellular SA ramp up their 5G footprints in the next few years as the region embraces the new technology.

The 5G spectrum bottleneck from canceled auctions in 2020 paved the way for the temporary use of legacy 4G mid-band spectrum such as 1.8 GHz and 2.1 GHz for 5G, known as Dynamic Spectrum Sharing, or DSS. This trend continues with the new deployments in 2022, especially among operators with no current access to harmonized 5G spectrum such as 3.5 GHz. For instance, Tele2 Eesti AS and UAB Bite Lietuva both launched 5G on the 2.3 GHz spectrum, while Telia Lietuva AB used 2.1 GHz.

The pioneering use of millimeter wave spectrum for 5G in the U.S. has not really caught on in the rest of the world, as evidenced by the lack of interest among operators in several attempted millimeter wave auctions for 5G in Asia-Pacific and Europe. In fact, even the USA has started to pivot toward mid-band spectrum with its recent spectrum auctions.

So far, Kagan data shows that there are only 33 operators that have deployed stand-alone commercial 5G services across 25 markets worldwide as of August 2022. 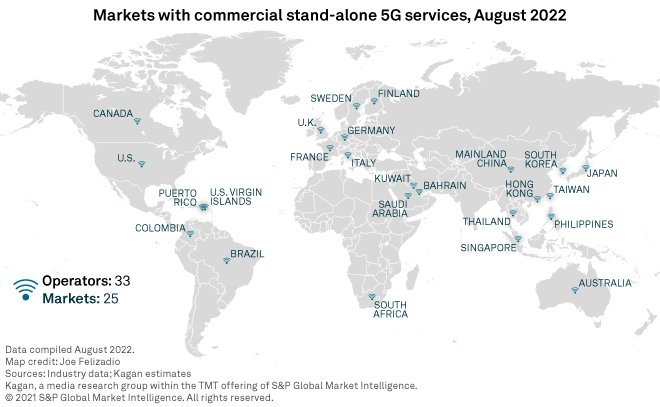 Most commercial 5G deployments still run on non-stand-alone, or NSA, mode. NSA 5G utilizes existing core network infrastructure running on earlier technologies, such as 4G LTE, to augment the 5G network. This deployment mode makes sense for initial deployments because it allows operators to offer 5G to consumers without overhauling their network infrastructure or migrating their users to new devices. NSA 5G has been useful for supporting enhanced mobile broadband, or eMBB, use cases of 5G.

As NSA 5G is meant to be a temporary deployment mode, Kagan expects that most 5G networks will eventually move to stand-alone, or SA, mode. SA 5G no longer relies on a 4G core. Instead, it works on a cloud-native 5G core network, and this enables the delivery of ultra-reliable low latency communication and massive machine type communication 5G use cases.

As most current consumer 5G use cases focus on eMBB, there is less urgency for operators to hop onto SA 5G. The expensive capital expenditure requirements coupled with the current adverse economic environment — supply chain disruptions, soaring inflation and contractionary monetary policies from central banks in many markets — have put further pressure on operators wanting to deploy SA 5G.

As mobile operators around the world leverage new spectra to expand their 5G service footprints and subscriber bases, systems vendors are providing the operators with the necessary radio access network, or RAN, solutions, and related wireless infrastructure needed to deliver 5G.

As was highlighted in our previous 5G Tracker covering the second half of 2021, Telefonaktiebolaget LM Ericsson (publ) and Nokia Oyj continue to lead all vendors in terms of 5G operator trials, wins and commercial deployments. However, the single most important indicator of success, in our view, continues to be the number of 5G live networks supported.

While both Ericsson and Nokia are well over the 200 mark in total 5G "relationships" (trials, wins, deployments), each vendor has provided more granular breakdowns of their worldwide 5G presence. For example, both vendors provide data points distinguishing 5G live networks, commercial 5G contracts/deals, and 5G wins and/or deployments with mobile network operators, as well as enterprise/private network and other 5G technology implementations.

In terms of cumulative 5G small cell shipments, Huawei Technologies Co. Ltd. remains the overall market leader, due almost entirely to the company's success in its home market in China, where total small cell shipments dwarf those of other markets and regions. For example, at Mobile World Congress earlier this year, China Mobile Communications Group Co. Ltd. Chairman Yang Jie said, "By the end of 2022, we are expected to roll out a total of over 1 million 5G base stations with subscribers using 5G networks to exceed 330 million, and 5G commercial use cases to be more than 10,000."

China Mobile accounting for the lion's share of 5G base stations makes sense given its pioneering role in wireless network build-outs, and the operator is now sharing its network build-out investment with a new, fourth Chinese operator, China Broadcasting Network Co., Ltd., or China Broadnet. In December 2021, China claimed to have deployed more than 1.3 million 5G base stations, according to the Chinese Ministry of Industry and Information Technology.

However, with Huawei and other Chinese vendors banned by the U.S. and other governments and their networks being "ripped and replaced," there has been only a handful of 5G operator wins announced by Chinese systems vendors in the past year. The end result of the various bans on Chinese 5G networking gear is net attrition of the vendors' total customer bases.

Getting back to Ericsson, as of this writing, the Sweden-based vendor claims 174 commercial 5G contracts, most notably, 125 live 5G networks in 55 countries. Ericsson was the first vendor to reach and surpass the 100 5G live network benchmark, in December 2021 — not surprising, given that Ericsson was also the first vendor to garner 100 commercial 5G contracts (August 2020). However, the flip side of the various government bans on Chinese 5G gear is that Western vendors selling into the Chinese market have also been restricted.

On the manufacturing front, Ericsson announced in April 2022 that it had produced more than 1 million 5G radio products at its Flex Tczew plant in Poland, where solutions are designed for the European market. And in terms of key customer deployments, Chunghwa Telecom in Taiwan has reported upgrades of more than 2,000 Ericsson mid-band 5G small cell sites (and 150 centralized RAN, or C-RAN locations) with more efficient Ericsson solutions to enable energy efficiency gains. Ericsson also won new or expanded contracts with Rogers Communications Inc. (Canada), Optus Mobile Pty. Ltd. (Australia) and Vodafone UK Ltd.

Meanwhile, Nokia Corp. has also generated increasing traction in the global 5G infrastructure market. As of this writing, Nokia claims 233 commercial 5G deals, up from 214 in our previous Tracker updated in February 2022, and 77 live 5G networks supported, up from 74. This includes 100 5G operator contracts with service providers: 16 in the Americas, 47 in Europe, 27 in Asia-Pacific and 10 in the Middle East/Africa.

ZTE Corp. and Samsung Electronics Co. Ltd. round out the top five vendors, which together account for approximately 95% of the global 5G RAN market revenues and unit shipments. As the second-largest Chinese telecom equipment vendor, ZTE faces the same geopolitical "headwinds" as Huawei and other Chinese vendors. Nevertheless, ZTE did manage to generate some customer traction outside of China in the first half of 2022, with Advanced Info Service PCL in Thailand and Malaysia.

Samsung, like Ericsson and Nokia, is also benefiting from the "rip and replace" of Huawei and ZTE gear in several key markets. However, it is also winning customer attention with its Open virtual RAN, or vRAN, solution set. Customer highlights for Samsung in the first half of 2022 include DISH Network Corp. (i.e., DISH Wireless) in the U.S. (a vRAN deployment), VMED O2 UK Holdco 4 Ltd. (i.e., Virgin Media O2, a subsidiary of Liberty Global PLC) in the United Kingdom, and Nippon Telegraph and Telephone Corp. (specifically, NTT East) in Japan.

Joe Felizadio contributed to this article.