In April 2019, the government implemented Section 44 under which broadcasters could opt to return the digital TV license and terminate their broadcasts or request that the National Broadcasting and Telecommunications Commission, or NBTC, waive the remaining two license fee installments and cover the broadcasters' digital TV multiplex, or MUX, fees for the remaining nine and half years of their license terms. This implementation occurred after the Association of Digital TV Broadcasting operators appealed to the government three times for financial aid prior to 2018 due to financial burdens networks faced from high winning bids and operational costs, low advertising revenue due to heavy competition as well as a general trend to online video platforms. 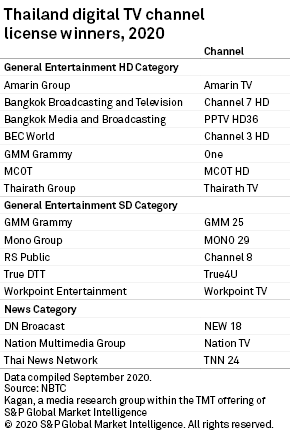 NBTC compensated the seven digital channels 2.76 billion baht based on the annual net profit of the business until the shutdown date and the awarded value of the spectrum license and subtracting the must-carry rule and broadcasting network rental fee subsidy, which the digital TV channels had already received. Broadcasters recorded the compensation as revenue for the 2019 fiscal year. This unexpected revenue and waive of the last two installments likely provided some financial relief. Reduction of future network costs will likely help in increasing operating margins for the remaining license period to 2029. 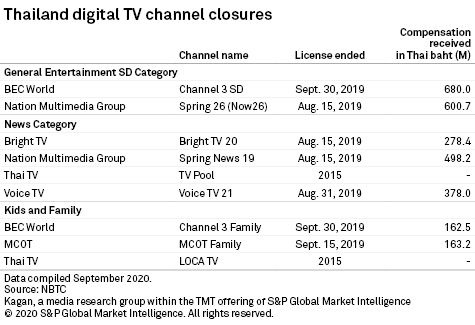 Ratings data available for 25 of the 26 DTT channels in 2019 indicates a small number of DTT channels commanded the bulk of the viewership, according to Nielsen, a trend typical of the pay-TV environment. 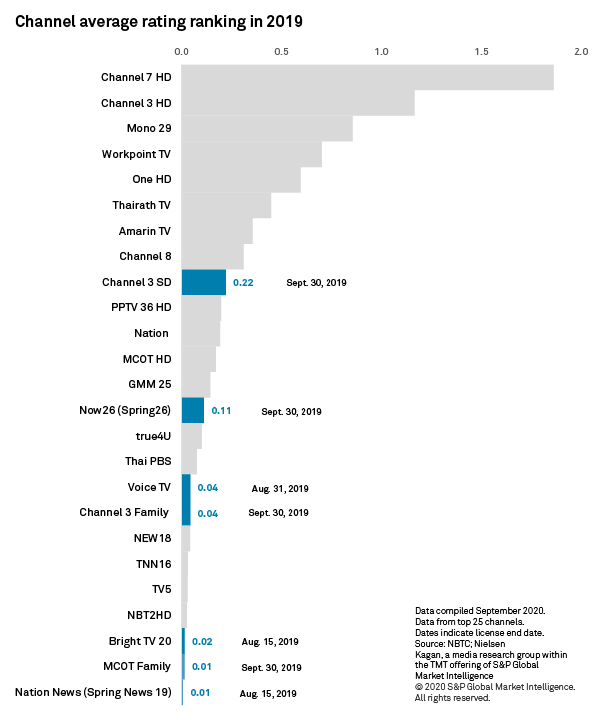 The month of June saw a similar distribution of ratings consistently for 13 channels tracked across four years from 2017 to 2020. Channel 7 HD and Channel 3 HD dominated viewership according to Nielsen data, followed by Workpoint TV and Mono 29. Channel 8 was in the top five channels for 2017 and 2018, but viewership dropped to almost half in 2019 and 2020. 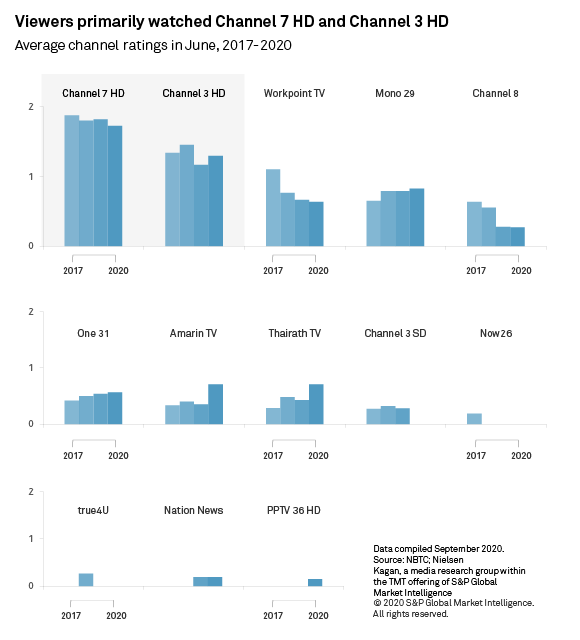 TV advertising expenditure in Thailand for 2019 was 70.30 billion baht, down 0.1% from the 2018's 70.38 billion baht, according to Nielsen Media Research. In the second year post-digital switchover on terrestrial transmission, digital TV channels have struggled to grow ad spend much beyond what analog TV reported in 2013 at 69.25 billion baht. In addition, with more than 20 channels competing for shares of the same pie in 2019, the resulting shares are likely to be small. TV ad spend from 2016 to 2019 dropped from the 2014 and 2015 peaks. The launch of digital channels in 2014 boosted total spend initially with a growth of 6.0% in 2015 to 84.40 billion baht from 79.59 billion baht. The following year, spend declined 15.9% and has since ranged from 65.78 billion to 70.99 billion baht. Broadcasters have blamed a sluggish economy with weak consumer spending and a lack of ad spend growth for stunting growth. Thailand's economy grew 2.4% in 2019, the slowest pace since 2014, according to the Thailand Office of the National Economic and Social Development Council. 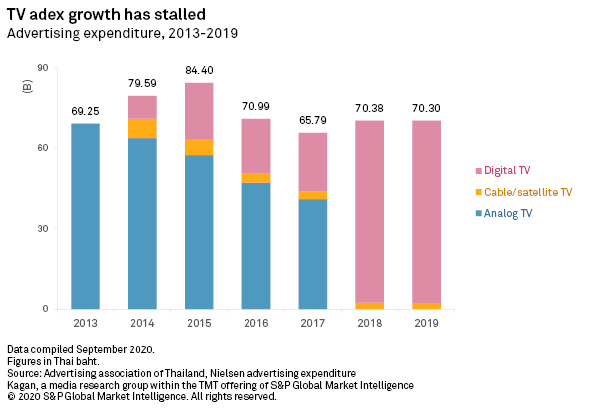 General entertainment channels in both SD and HD accounted for 90.5% of digital channel ad spend in 2019 while news channels and kids channels attracted less than 4% of ad spend. The low revenue generated by news and kids channels provided an incentive for broadcasters to rethink programming strategies. Channel 3 Family and MCOT Family ceased operations in 2019, and their programming shifted to sister channels Channel 3 HD and MCOT HD. There were seven news channels in 2015, and only NEW 18, Nation TV and TNN 24 continued while the rest ceased operations in years 2015 and 2019. 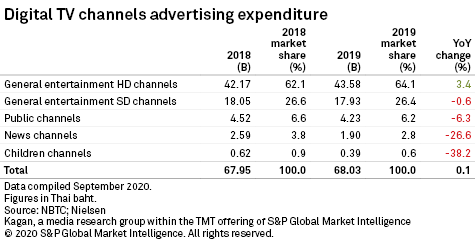 In 2019, only JKN Global Media, Nation Broadcasting and Amarin Printing and Publishing expanded revenues, with growth ranging from 10.9% to 20.3%. The rest of the media groups in our analysis experienced negative growth in 2019, ranging from a drop of 22.9% to a fall of 4.9%. The top five media groups by revenue in Thailand were BEC World, GMM Grammy, RS Public, Amarin and Workpoint Entertainment as of 2019. 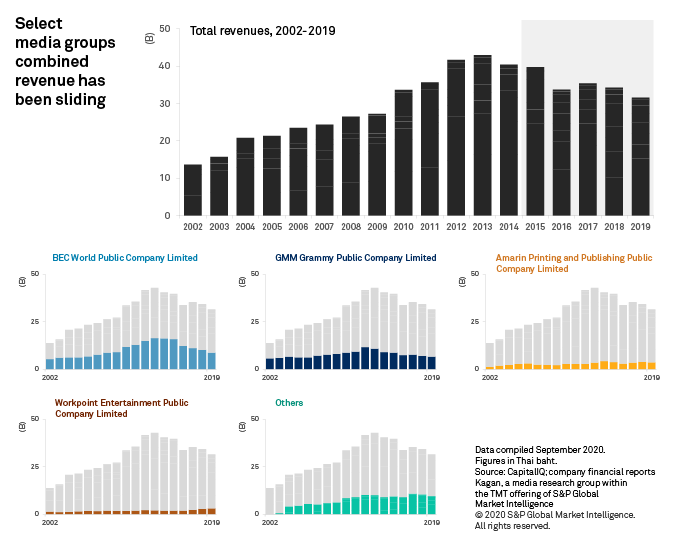 Amarin Printing and Publishing made its first step into the broadcast industry when it launched the Amarin TV HD Channel 34 in 2014. The group's primary business focuses on book and magazine publishing, printing and packaging. Its revenue hit its lowest growth rate for the past three years in 2019, up 10.9% compared to 25.1% year-over-year growth in 2018 while the 2015 to 2019 CAGR hit 12.1% to reach 3.10 billion baht. Hence, the EBITDA margin has remained positive, ranging from 7.4% to 16.4% between 2017 and 2019. Amarin's television division contributed 1.03 billion baht in 2019, up 11.1% from 0.92 billion baht in 2018, accounting for 33.2% of group revenue. The Amarin TV HD channel has generated positive growth in advertising revenue despite the stagnant trend in advertising spend. Amarin has attributed success to the TV series time slot of 10 p.m. to 11 p.m. on Saturdays and Sundays as well as Muay Thai boxing on Fridays and Sundays. 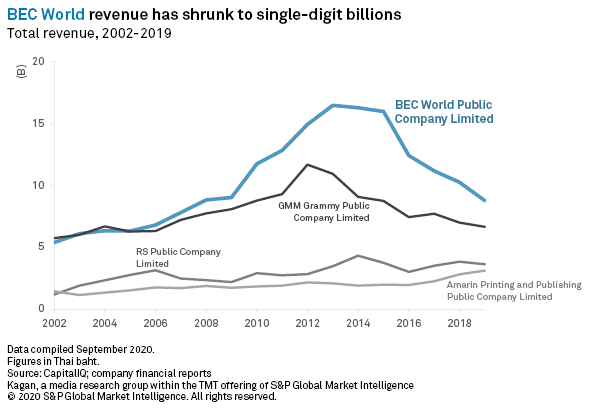 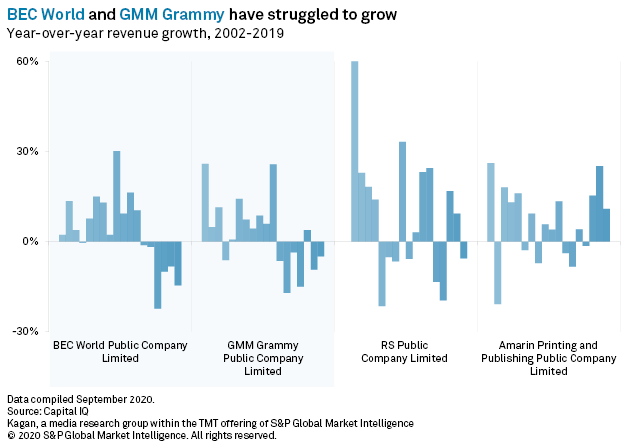 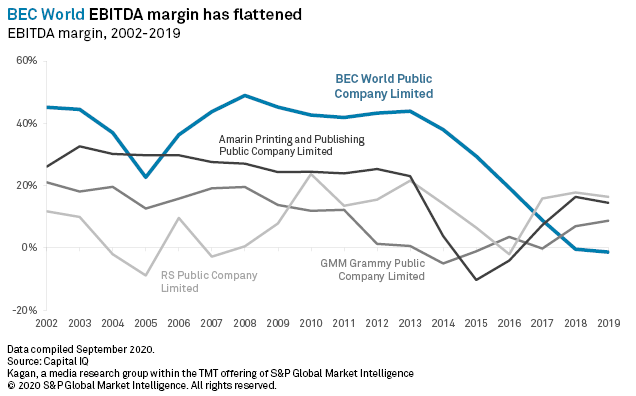