Worldwide smartphone shipments slumped by 6.6% year over year in 2020 on an estimated 1.29 billion units due to severe supply constraints in the first half of the year and the coronavirus pandemic's indirect influence on demand. However, as the year progressed and the rate of spread of the virus was slowed down, supply and demand improved and culminated in an estimated 382 million smartphone units shipped in the fourth quarter of 2020, a 4.3% growth compared to the same period in 2019.

The biggest winner was Apple as it continued to dominate the fourth quarter with annual flagship smartphone refreshes. However, this time Apple released 5G-enabled handsets to capitalize on the 5G hype, which resulted in the single biggest quarter that Apple has seen in terms of smartphone shipments. On the other hand, the biggest loser was Huawei as the company ran out of stocked up critical smartphone components due primarily to a U.S. trade ban. It was also forced to spin off its growing Honor sub-brand to free it from the said ban. But as Huawei shipments declined, other brands were quick to capitalize. 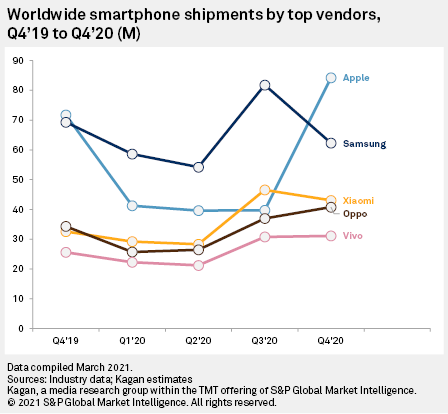 Worldwide 5G-capable smartphone shipments exploded in 2020 with an increase of 1160% over 2019. The biggest contributor was the Chinese market, where an estimated 55% of total shipments to the country were 5G-enabled, owing to its head start on 5G infrastructure deployment. Predictably, Chinese brands saw the most gains with Huawei (including Honor) shipping the most 5G-enabled handsets worldwide. While Huawei's numbers are expected to shrink moving forward, other top smartphone vendors are expected to pick up the slack in 2021.

Kagan's quarterly worldwide smartphone update estimates the shipments and market shares of select vendors based on business unit revenues, supply chain information and proprietary shipment and market share tracking models. MI clients can access our full report that breaks out smartphone shipments by vendor along with our analysis on the North American market and the growing demand for 5G handsets.