Broadband consumption has spiked as much as 81% while box office receipts have plunged by almost 100%. U.S. media industry impacts from the new coronavirus disruption have been swift, and in many cases, severe. Here is a summary of the impacts to date on the media sectors we cover.

* Subscription Streaming Services: Streaming services are seen as the obvious winners as many people shelter at home, leading to an expected subscriber uptick in the first half of the year. With all the extra couch time, two in ten survey takers expect to add a streaming service (e.g. Netflix) through June, according to our March 27-29 Coronavirus flash survey of 1,000 Americans.

Services such as ViacomCBS Inc.'s CBS All Access and The Walt Disney Co.'s Hulu that offer an ad-supported tier may experience a short-term increase in advertising if their platforms see more usage. As for Netflix Inc., we expect a surge in net subscriber adds in most global markets through the second quarter of 2020.

* Free Internet media platforms such as YouTube: These free ad-supported services have a positive near-term outlook as economic pressures mount on consumers and make them more amenable to accepting ads. Alphabet Inc.'s YouTube may see the most short-term upside due to its existing base of over 2 billion monthly viewers, and could also benefit from a boost to its YouTube Premium offering, which is ad-free.

* Broadband Use has unsurprisingly spiked during this time of peak work-from-home activity. Based on an analysis of data from OpenVault, a supplier of industry analytics for broadband providers, downstream consumption surged 81% on March 16 from the same day the week before, while upstream consumption increased 59%.

For the week of March 16-20, average day-time data usage jumped 47% compared to the average from January 2020, with night-time use up 20%, for an average gain of 30% compared to the January average. 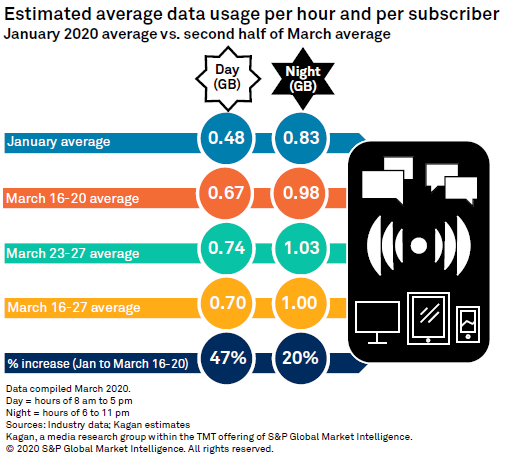 * TV Viewing: Live broadcast viewing has experienced a resurgence in recent weeks, even with the loss of sports programming. Broadcasts that were suffering from digital competition, such as the local and network evening news programming, are spiking in viewership. According to our March 27-29 Coronavirus flash survey of 1,000 Americans, 61% of survey takers self-reported watching more TV/video overall 'as a result of coronavirus' (including streaming and all forms of viewing).

* Gaming: Many people who are spending more time at home are gaming and as such, many services are seeing a spike in usage. The activity is putting a strain on bandwidth, however, and some CDNs have announced slowing video game downloads to avoid traffic bottlenecks. Certain services will expand quickly — for example, our consumer virtual reality software forecast projects revenue to grow 72.5% to $1.04 billion in 2020.

* The new virtual office: The flight of workers to the home is increasingly expected to result in permanent shifts to how work-from-home is viewed and accepted. Augmented reality and virtual reality could play a growing role in the new landscape.

* VOD Releases: With theaters shuttered, studios have elected to shorten theatrical releases for many films and rush them more quickly to digital platforms. Most films are coming to market with a $19.99 price, and studios are going to get approximately 70% of the buy/rental.

* Potential for M&A: The potential for media mergers, both on a large transformative scale as well on a smaller scale, is heightened in a time of economic pressure. The media landscape could look different after the shake-out that follows a severe reduction in consumer spending and ad revenue declines.

* Potential larger impact of Facebook Inc., Google and Amazon.com Inc.: The better the major players that generate digital ad revenue and engagement can weather this period of disruption, the stronger their positions will become. Digital ad revenues have a much brighter outlook in 2020 than their linear counterparts.

* Multichannel services: While multichannel video services might enjoy a short-term bump as people sign up for video services to expand their at-home options, ultimately the video trend is likely to return to its steady decline as price considerations and streaming options continue to chip away at multichannel's video installed base.

U.S. cable high speed data households have already been able to take access of higher download speeds. We estimate that just over 82% of total residential cable broadband households received download speeds of 100 Mbps or higher at year-end 2019. An estimated 39% received speeds of at least 200 Mbps. This capacity ensures the broadband segment will remain strong for major U.S. cable MSOs. 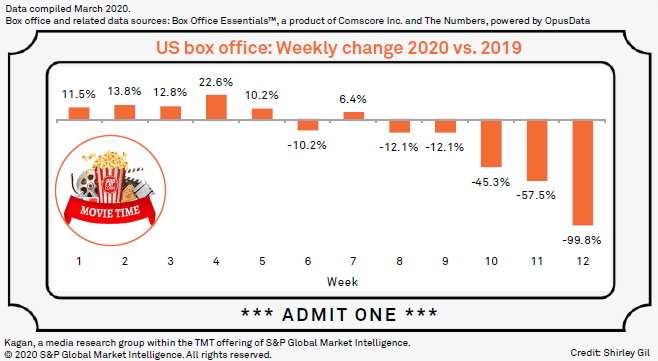 * The ad market: Advertising — particularly traditional media — gets hit hard in a recession and signs are already emerging that it's going to be a tough 2020. Interpublic Group of Cos Inc. media research unit Magna recently estimated that media suppliers' linear ad revenues could be down 12% in 2020 due to the economic downturn resulting from the Coronavirus outbreak. Hopes will still ride high that political will stay strong in the second half of 2020, and that auto, one of local TV's critical categories, will be helped by the deep discounting and offers sure to come from auto dealers.

The situation will be tough particularly on smaller companies and assets. Smaller TV station concerns can apply for Federal relief, as ad sales slow. Small and mid-size cable networks were already struggling with falling subscribers. Now the soft ad market and downturn in consumer spending is likely to lead to fallout among small to mid-sized channels.

* Broadcast TV Networks: It's been feast or famine. Record political spend by former Presidential candidates such as Michael Bloomberg has given way to a soft ad market, balanced by an upswing in live viewing. The loss of live sports content has hit major broadcast nets hard. For example the NCAA tourney, growing in popularity, generated about $968 million in advertising revenue last year. Final-game ad spots approach $1 million.

The Summer Olympics in Tokyo, slated to start July 23, were postponed on March 24. We estimate that Comcast Corp.'s NBC (US) paid some $1.4 billion for the U.S. license rights, compared to total revenue of $1.6 billion from the 2016 Rio games. The games are now to take place in 2021 and could become a bright spot in an off year, if advertiser demand were to hold up for two successive years of Olympics in 2021 and 2020.

* Major sports networks will suffer the loss not only of ad revenue and viewership, but will also potentially have to contend with the scheduling nightmares that could ensue if many sports start back up around the same time. ESPN could lose $600 million in ad revenue from the suspension of the NBA season. NBA TV's hit could be $21 million. TBS margins could contract by 30%.

* TV/Movie Production/pilots: The abrupt halt to broadcast pilot and series production and filming will have a ripple effect on viewing, ad revenues, and syndication far after the world has begun to return to its former lifestyle. As of March 19, we estimate more than 160 shows had shut down, including TV series, pilots and sports. The economic impacts will be significant.