The slowdown in pay-TV subscriber growth, along with the growing presence of streaming media devices in TV households, is expected to drag down global shipments of cable, satellite and IPTV set-top boxes at a projected -1.9% CAGR from 2019 to 2024, according to Kagan’s latest forecast. This trend is most pronounced in the cable segment, which is expected to lose subscribers over the next five years in all regions except Latin America and the Middle East and Africa. As subscribers decline and the installed base shrinks, surplus inventory is re-deployed and need for new boxes decreases. 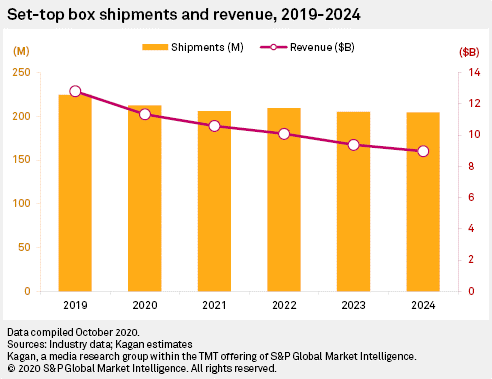 Much of the forecast shipment losses will come from North America and Western Europe. Both regions have mature TV markets as well as cable and satellite TV subscriber bases that are expected to shrink through 2024. Compared to North America, however, the rate of decline for the cable and satellite subscriber bases in Western Europe is much slower. Additionally, the region’s IPTV segment is still seeing subscriber growth, which is mitigating the decline of total STB shipments to the region resulting in a -3.2% CAGR — a slow descent compared to total North American STB shipments practically falling at a negative 10.6% CAGR.

Like North America, the Latin America and Caribbean region is also expecting shrinkage in satellite TV subscribers due to the rise of IPTV platforms coupled with an economic slowdown. Recent regulatory changes that have allowed IPTV to blossom in the region are also slowly suffocating the satellite STB market and we expect total STB shipments to decline overall at a -5.9% CAGR through 2024. 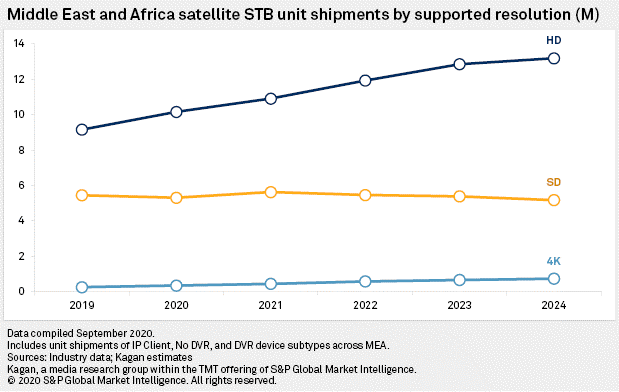 On the other hand, satellite set-top box shipments to the Middle East and Africa are expected to grow in line with the rise in total satellite subscribers and free-to-air, or FTA, households. HD satellite boxes currently make up the majority of shipments for both pay-satellite and FTA and are expected to grow at a 7.5% CAGR throughout the forecast period. While quickly rising, 4K adoption is limited in the region due to the low 4K penetration in developing markets with shipments of 4K satellite boxes expected to stay under 1 million units throughout the forecast period.

Over in Eastern Europe, shipments of 4K cable boxes are expected to grow as more cable operators roll out 4K services to keep up with satellite TV competition. These new units are gradually replacing the older standard definition installed base. However, overall shipments are expected to decline slightly over the 5-year forecast period at a -0.6% CAGR in step with the gradual decline of total cable subscribers in the region. Under threat from the rising IPTV presence, some cable operators have started offering triple-play options to consumers to stave off subscriber churn.

Meanwhile, IPTV set-top box shipments to the Asia Pacific region are dominated by China as the country accounts for more than 80% of the total IPTV subscribers in the region. However, China's IPTV subscriber growth is slowing down as the market approaches saturation. Despite new box rollouts from incumbents in South Korea, Singapore, and Malaysia, regional IPTV STB shipments are expected to drift down at a -2% CAGR.

MI clients can access our full report that breaks out set-top box shipments across regions and supported resolution, as well as individual analysis on the cable, satellite and IPTV STB markets.