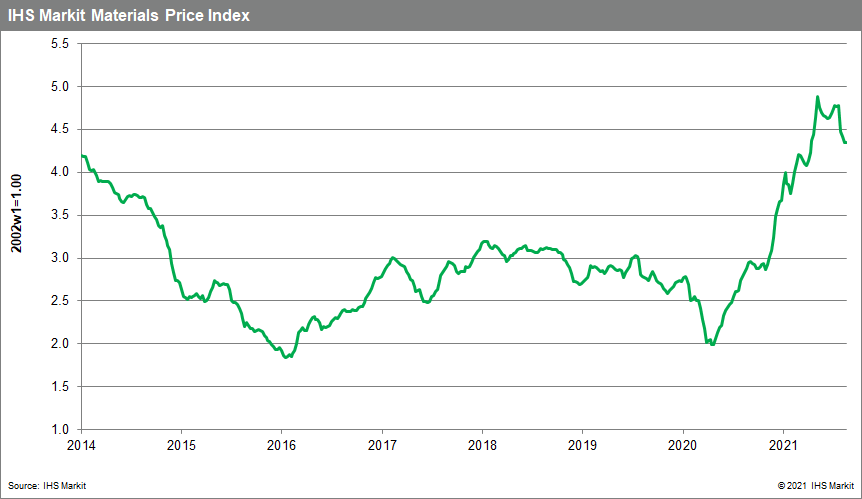 Rubber, DRAMS, and ferrous prices observed the largest declines last week. Our ferrous sub-index fell 1.6%, its sixth consecutive weekly decline. Iron ore prices, which have seen a sharp correction over the past month, fell approximately 2% last week to their lowest level since early February. Iron ore prices face downward pressure from expectations of a weak Chinese economic recovery and mainland China's pollution abatement efforts which are limiting steel production. This intervention has reduced demand for iron ore, pushing prices down. DRAMS prices fell 2.1% last week, marking eight consecutive weeks of decline. Notwithstanding the recent DRAM price adjustments, supply bottlenecks for electronic components are impacting production for a range of industries. More notable, Taiwan Semiconductor, the world's largest chipmaker, has announced price increases ranging from 10-20% for later this year and early 2022 that will soon impact the MPI. Among the MPI's components showing increases, the freight rate index rose the fastest last week, jumping 6.3%. Freight rates were pushed higher because of the partial closure of the Ningbo-Zhoushan port in mainland China due to a COVID-related lockdown. Increased difficulty in getting goods from China (or containers back to China) has acted as a constraint in global supply chains and put upward pressure on rates. While the port has since been brought back online in full, it could take weeks for operations to return to normal.

While the MPI declined fractionally last week, markets ended the week on a generally positive note. While growing Delta variant COVID-19 case counts globally have created anxiety that the recovery may slow, markets seem to look past these concerns in trading towards the end of last week. Markets also seemed to react at week's end to what was perceived as dovish comments voiced at the US Federal Reserve's annual Jackson Hole meeting. Although Chairman Powell did note that the Fed's bond buying would soon be scaled back, his continuing characterization of the current rise in inflation as temporary reassured markets that a more aggressive tightening in policy was not likely. We agree with this assessment of inflation in the near-term. The key, however, remains what happens on the supply-side of markets. The correction in commodity prices since the start of the second quarter has resulted primarily from softness in demand, not an easing of the disruptions and bottlenecks that have been plaguing supply chains. Until these are resolved, tight supply conditions in goods markets will continue to keep upward pressure on prices.

Resiliency in consumer spending and the capital goods sector and a partial easing in financial conditions have dimm… https://t.co/677PztM2hZ

Looming recessions in #Europe will depress affordability and investments in #realestate. Overvaluation of housing p… https://t.co/pdTR3WTWp5

Don't miss this one! https://t.co/nrv1huLyJ3