Price pressures in the sub-Saharan African region have risen since the outbreak of the Russia-Ukraine conflict.

We have increased the region's overall inflation forecast for 2022 by 260 basis points to 11.6%, from 8.8%. Rising input costs and weaker exchange rates of local currencies are primarily responsible for the rapid price increases in recent months.

Higher inflation will be a drag on overall economic activity. A global recession could have a larger impact on the sub-Saharan African region this time around as the agricultural sector buffer wanes, GDP growth in mainland Chinese is assumed to be less resilient, and higher sovereign debt levels deter growth prospects.

The latest purchasing managers' indices (PMIs), compiled by IHS Markit, show input costs in the sub-Saharan African region have been on an upward trend since mid-2021, driven by increasing global commodity prices.

The outbreak of Russia's war against Ukraine in February 2022 amplified the global input costs rise and final price pressures for food, crude oil, and fertilizers given Russia and Ukraine's prominence in the global supply of these commodities.

The spike in global oil prices has increased the demand for refined fuel imports in sub-Saharan Africa given the lack of sufficient local refinery capacity.

Most currencies in the sub-Saharan African region had weakened against the US dollar by the second quarter of 2022 due to US dollar resilience, a worsening overall current-account position as import demand for fuel and food grew, and tighter global financial market conditions.

The weaker currencies have amplified the global imported input cost pressures on overall inflation since early 2022.

The easing of pandemic-related restrictions supported a robust expansion of sub-Saharan African GDP during the first quarter of this year, with companies increasing employment levels and awarding attractive compensation packages.

As economic activity starts to slow, the likelihood of looser labor market conditions could curtail wage growth and second-round price pressures during the second half of the year.

The rising cost of living and higher remuneration demands pose the biggest risks to this expectation — especially for those countries with a strong labor union participation rate or high social unrest score, such as Angola and South Africa.

The sharp acceleration in the headline inflation rate prompted a more-restrictive monetary policy response by central banks in the sub-Saharan African region. 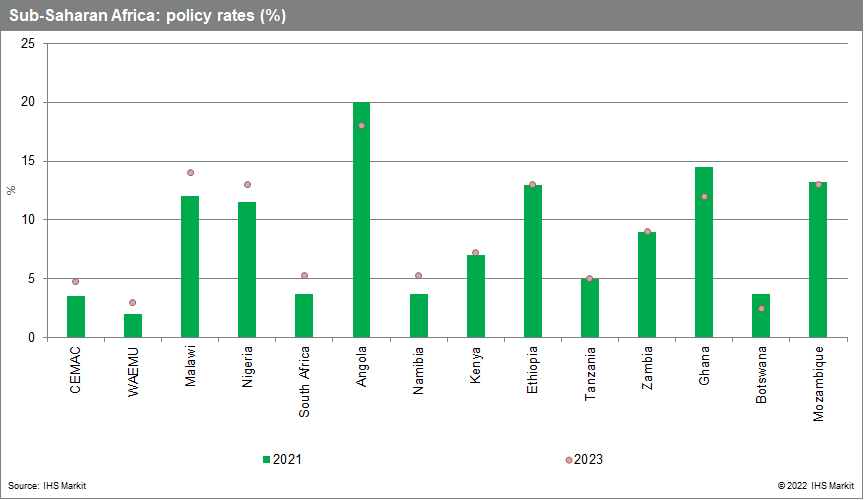 The steep policy rate adjustments during 2021-22, combined with lower inflation expected in 2023, will allow some monetary easing in Angola, Botswana, Ghana, and Mozambique next year, IHS Markit estimates show.

Our analysis shows that, within sub-Saharan Africa, WAEMU member states will experience one of the largest differences between their average headline inflation rate in 2022-23 and their rate in 2015-21.

WAEMU countries, which use the West African CFA franc as a common currency, benefited from currency stability and low inflation for many years given the French Treasury's guarantee of the convertibility of the CFA franc into the euro at a pegged rate through an unlimited overdraft facility.

The eurozone's greater vulnerability to the consequences of negative spillovers from the Russia-Ukraine war and the ECB's relatively late start to the hiking cycle suggest that the euro, and thus the CFA franc, will remain relatively weak against the US dollar.

The WAEMU's central bank, the Central Bank of West African States (Banque Centrale des États de l'Afrique de l'Ouest: BCEAO), hiked its policy rate by 25 basis points in May 2022, while a further rate increase of 75 basis points is assumed by IHS Markit over 2022-23.

The harsh reality of the rising cost of living and higher interest rates will intensify the social unrest risk in the WAEMU region, which is already problematic due to a series of coups, unstable governments, and adverse climate-change events. Large-scale public and private investment projects will allow GDP expansion to continue, particularly in Côte d'Ivoire and Senegal.

The higher inflation and subsequent higher interest rates bode less positively for the broader sub-Saharan African region's growth prospects. Global recession fears, particularly in the US and the European Union in 2022, could add to the growth concerns in coming months. 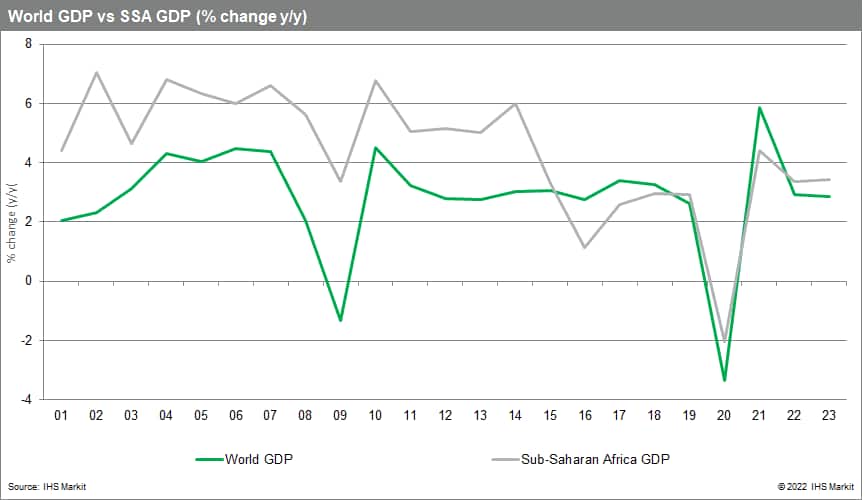 A global recession could prove more challenging for the sub-Saharan African region this time around, with fewer tailwinds and buffers available to avoid sluggish growth.

Spillovers from previous recessions in developed economies, such as the 2008-09 global financial market crisis, were largely muted for the sub-Saharan African region, given the composition of the region's GDP (agriculture/consumer driven) and prevailing tailwinds at the time, such as resilient economic growth in mainland China and its expanding trading relationship with the region.

External debt levels in sub-Saharan Africa are now much higher than in 2009-10. More than 50% of sub-Saharan African countries in IHS Markit's medium-term sovereign risk score series are ranked in the Actual or Possible Default Scenarios category.