The manufacturing activity measured by the IHS Markit Purchasing Managers Index dropped from 55.5 to 50.8 points in May, pointing to the weakest pace of expansion in sales, production, and input buying in ten months. That said, the detrimental impact of the second wave on the manufacturing sector is considerably less severe than the national lockdown last year. Indicators of broader economic activity showed a sharp annual expansion in April, boosted by the low base of the national lockdown in April 2020. However, in sequential month-on-month (m/m) terms, most high-frequency indicators of real activity contracted in April, albeit still at a fraction of what was reported last year. We expect a greater impact on these sectors to show up in the May data when most of the Indian states were under tighter restrictions. 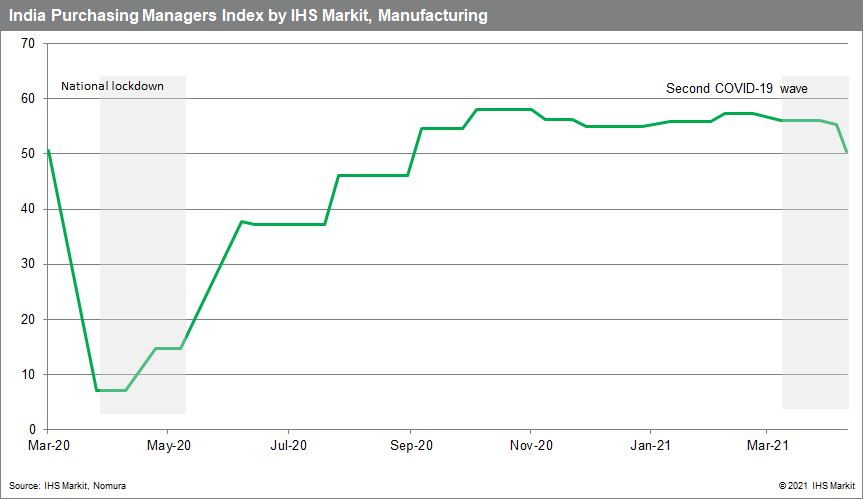 Generally, we expect the demand side of the economy to be more affected than production. High rates of mortality and severe illness will have more profound damage on both sentiment and purchasing power of households, with effects likely to expand well beyond the pandemic peak. New mobility restrictions and job losses will dent household earnings in the near term, while permanent loss of primary earners due to death or disability will have a longer-term impact. Rural households, in particular, maybe more affected than last year. The government's flagship National Rural Employment Guarantee Scheme (NREGS) has cushioned the rural economy from the pandemic also providing vital support to migrant workers returning from the lockdown-hit cities. The 2021 Union budget presented in February cut the NREGS allocations by more than one-third while also reducing the overall social and welfare spending allocations. 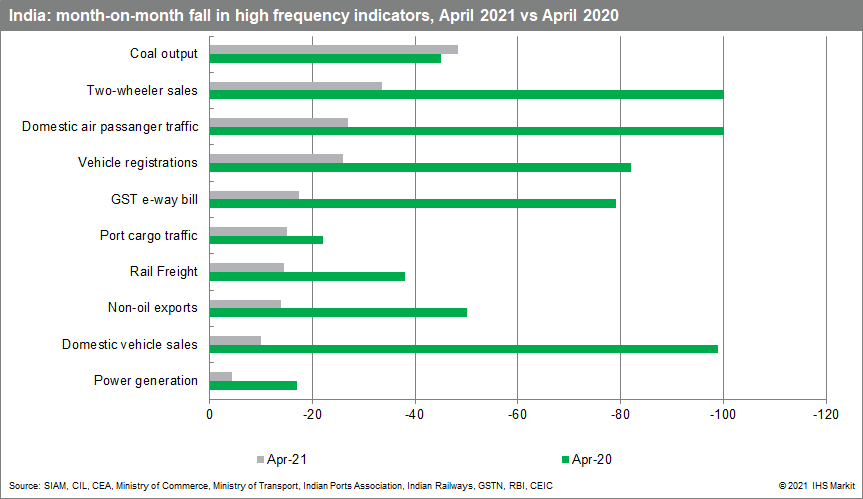 On assumption of most regional lockdowns extending through June 2021, India's real GDP growth projection for FY2021 was cut to 7.7% in our May forecast from 9.8% in March. This implies a sequential quarter-on-quarter (non-annualized) contraction of 8.5% during the April-June 2021 quarter - although in annual terms growth will still be strong owing to low base effects from the double-digit contraction in the first quarter of FY 2020. Larger base effects and delayed pent-up demand will now push the FY2022 growth higher to 6.6% from the previous forecast of 5.8%.

We also assume that India's vaccination campaign will continue to face headwinds beyond June due to existing supply shortages. At the time of writing, about 218 million Indians had received their first vaccine dose, but only about 3.2% of total population were fully vaccinated. The slowdown in the rollout is likely due to the limited supply of vaccines, which will further be impacted by the decentralization of vaccine strategy. This policy will result in an inequitable rollout depending on each state's pace of procuring and disbursing vaccines.

So far since the onset of the pandemic in March 2020, the combined stimulus measures of the central government and the Reserve Bank of India (RBI) amounted to around 15% of GDP. The economic impact of the second wave may prompt the government to announce additional stimulus measures during FY2021, but any new support to households and businesses will likely come at a cost of reduced capital spending. Meanwhile, in May 2021 the RBI has announced a new support package targeting banks, individual borrowers, and MSMEs. In the second half of 2021, we expect the RBI to increase capital injection into state-owned banks to allow them to increase lending and liquidity support to affected regions and sectors, especially MSMEs in the coming months, extending the supports introduced. Currently, we do not expect a blanket moratorium on loan repayment, but this may change in accordance with the situation with COVID-19-related lockdowns.