The FCA confirmed on March 5, 2021 that many of the existing London interbank offered rates (LIBORs) will cease to be published at the end of 2021 with a small number of rates continuing on a synthetic basis beyond that and USD-LIBOR continuing to the end of June 2023 for a subset of tenors.

How has the market share of RFRs evolved since the start of 2020?

GBP is the poster child of the IBOR reform / transition programme. The Reformed SONIA now makes up over half the number of new trades executed…

…and over 60% of the notional traded.

However, GBP-LIBOR will cease publication on December 31, 2021 so there is still a way to go ahead of cessation. And so much of the new IBOR transactions being executed matures post December 31, 2021, albeit some of this activity maybe offsetting legacy risk…

That said SONIA is trading more at long dated tenors… 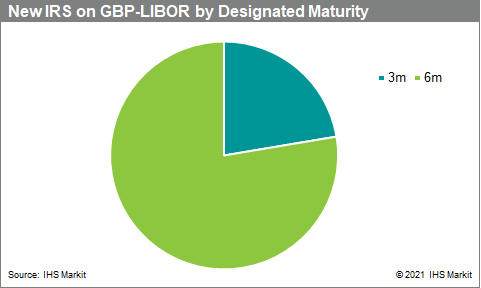 EuroSTR (a.k.a. €STR) will replace EONIA. There was an initial uptick at the end of July 2020 driven by the CCPs switching from EONIA to EuroSTR discounting on 25th July 2020. Since then, EuroSTR has made very gradual further progress but still only makes up 2% of volume traded. It is expected that EURIBOR will continue to be published until at least 2025 but that there will be a material migration to EuroSTR. EUR-LIBOR will cease publication on December 31, 2021 but EUR-LIBOR is not traded in the swaps market, there have been <10 trades a month for many years and therefore although it is included in the numbers it is excluded from these graphs.

… and less than 5% of notional traded.

… and much of the new IBOR transactions being executed matures post December 31, 2025…

That said EONIA is trading more at long dated tenors… 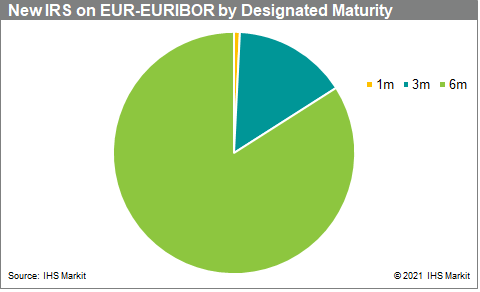 SOFR will replace Fed Funds and USD-LIBOR. There was an initial uptick at the end of October 2020 driven by the CCPs switching from Fed Funds to SOFR discounting on 16th October 2020. Since then, SOFR has made very gradual further progress but still only makes up less than 2% of volume traded. Unlike the other LIBORs it is expected USD-LIBOR will continue to be published until June 30, 2023.

… and approximately 3% of notional

… and much of the new IBOR transactions being executed matures post December 31, 2023 … 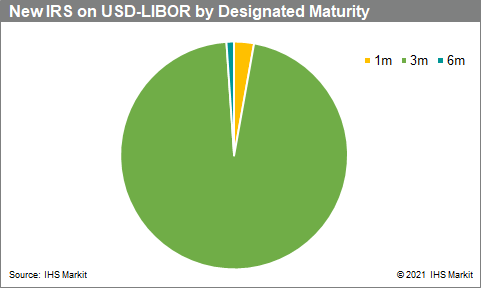 Japan is taking a multiple rate approach. DTIBOR is expected to continue alongside TONA. ZTIBOR is planned to be discontinued 2 years after LIBOR cessation. There has been little change over the last 15 months. JPY-LIBOR will cease publication on December 31, 2021 but LIBOR remains >95% of all JPY swaps volumes with TONA, DTIBOR and ZTIBOR making up approximately 2%, 2% and 1% of traded volumes respectively.

There had been little change until the start of 2021. CHF-LIBOR will cease publication on December 31, 2021 but LIBOR remains approximately 90% of all CHF swaps volumes.

Canada is taking a multiple rate approach. Reformed/enhanced CORRA will continue alongside CDOR.

Australia is taking a multiple rate approach. The reformed BBSW is expected to continue alongside AONIA. Activity in AONIA has been very subdued over the last 12 months.

Singapore initially took a multiple rate approach. However, the reform of SIBOR to base it more on transaction data failed and will cease in 2024. SOR is expected to be replaced by SORA. March 2021 saw the first noticeable uptick in SORA volumes with it share of the SGD market doubling from 1.5% to just over 3%.

The FCA and other regulators are clear, LIBOR and many other IBORs will become a Woolly Mammoth. Progress on adoption of new RFRs has certainly been made, particularly in SONIA. However, based on March activity there is still plenty of new IBOR activity across the curve. 93% of new GBP-LIBOR activity executed in March matures in 2022 or later which is after the planned LIBOR cessation. There is clearly still a way to go to see the new RFRs completely replace the IBORs in global swaps trading.

Interested in finding out more? Connect with Kirston Winters

The newly published report, Liquidity pressures put funding in the crosshairs at community banks, is available on S… https://t.co/DMA0IE5f8K

The U.S. energy storage industry has a powerful set of new tools in 2023 to help decarbonize the nation’s power gri… https://t.co/kPEUx230WB

Energetic rate case activity made the month one of the most active in the last five years in terms of initial filin… https://t.co/J6LJPf9gn5