This article by John Gallagher originally published on Fairplay.IHS.com.

When the International Maritime Organization's (IMO's) legal committee met for its 105th session in April, the subject of fraudulent ship registrations was a hot topic.

The reason it had been made a priority was because several member states had informed the IMO Secretariat over the last several years that their flags were being flown illegally, beginning with the Democratic Republic of the Congo (DRC) in 2015.

The fraud was discovered when the DRC was contacted by INTERPOL, requesting authorisation to prosecute two vessels allegedly flying DRC's flag that had been involved in illicit activities.

Following an investigation that revealed that 77 of 84 vessels flying DRC's flag had been registered without the approval of the country's maritime administration, Fiji reported 91 illegally registered ships under its flag in 2017. The Federated States of Micronesia reported 150 ships illegally registered under their flag last year as well.

Although IHS Markit data show that the number of ships that are fraudulently registered has dropped since DRC's assessment three years ago, there are no signs that the problem is going away. In fact, in the five months since the IMO first discussed the problem in depth, at least three more member states have been victimised by a fraudulent ship registry.

"When you look at countries like Micronesia, the DRC, and Fiji, and the number of vessels involved, it's alarming from both a safety and security standpoint. We've had ships with a completely fraudulent set of certificates that look real, and if a port state control officer isn't aware that the registry is fraudulent, they may well let the vessel pass. God only knows what safety deficiencies might be on board, or even what those behind the fraudulent registry could be up to." 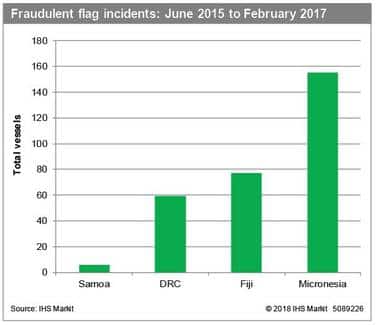 As reported by Fairplay last year, many fraudulent flag registrations - the legality of which can be cross-checked with a ship registry using their official seven-digit IMO number - have tended to be small fishing vessels, small general cargo vessels, or dredgers. Unless they are registered with a recognised flag administrations, their safety and environmental standards cannot be verified.

In addition, "because vessels that are registered under these fraudulent flags tend to be much older vessels, such as single-hull tankers, they're probably not properly inspected," said IHS Markit Maritime & Trade analyst Mark Krzyzak.

Krzyzak, who monitors vessel registrations for verification with the IMO and its member states, also pointed out that federal governments are losing revenue because of the problem.

"Whoever's registering these vessels fraudulently is collecting money through vessel tonnage fees that, if registered legitimately, should be going to the legitimate flag authority, which is usually the government of that country. That's not happening," he said.

The reputation of Micronesia - which is not an IMO member state - is at high risk of being harmed by fraudulent registries. According to IHS Markit records, Micronesia had about 150 vessels flying the flag in 2017.

"We noticed suddenly a lot of vessels flying the Micronesian flag," Krzyzak said. "It was strange because it is a flag that had very few vessels, and we didn't think they operated an international register - and they don't."

Krzyzak explained that after meeting at the IMO with an official from Micronesia, it was determined that a company was being set up called Micronesian Inter-national Ship & Business Registry, which currently lists several official regional heads in China, India, and Sri Lanka.

"It looks authentic, it works, and it looks good. But it turns out, while there had been talk at one stage of the country operating an international ship registry, it had never been approved."

While Micronesia does flag its own ships, running an international registry is against the country's federal law, and it "doesn't allow vessels to be owned by foreign entities", Krzyzak was told.

The IMO's experience with Micronesia exposed a related practice that seems to be spreading: fraudulent crew certificates issued by illegal companies.

"We've gotten emails from shipmasters and ship-management companies saying that they've got a certificate, but how do we tell if it's real," Kenney said. "If a shipowner has someone with fraudulent certifications operating a large vessel and they're not qualified, the consequences of that are not only a safety and environmental problem, but if there's a spill or an accident, there would be a liability issue as well. It's kind of frightening."

Krzyzak believes there could be "hundreds" of crew members with false certifications, even if they happen to be issued to qualified seafarers. "[Seafarers] thinks they're valid, but wait until they try and go to another company and serve on another vessel. They're going to find their certificates are worthless," Krzyzak said.

In a proposal submitted for discussion at the April legal committee meeting (LEG 105), member states Cyprus, the DRC, Fiji, Germany, Morocco, Spain, and Vanuatu outlined the need for action on the problem.

"As a result of the fraudulent registration of vessels, there are hundreds of ships sailing internationally over which there is no effective control," they stated. "In many cases, the companies operating them provide cover for illicit and illegal activities on board, often related to trade with countries under United Nations sanctions, contribute to maintaining substandard operations in shipping and can put lives of seafarers on board those ships at risk. It is often difficult for states that are victims of the fraud to trace the companies illegally using their flags."

Discussing measures to prevent the fraudulent registration of ships would ensure that legally registered ships receive recognisable nationality from one particular state, they maintained, which allows freedom of navigation and provides a basis for jurisdiction, protection, and intervention.

"This would furthermore ensure that IMO's efforts to induce greater compliance of ships with IMO's international standards regarding safety at sea, pollution prevention, manning and international security requirements are not undermined by fraudulent activities," the LEG proposal stated.

In a summary report following the meeting, IMO delegates acknowledged that the issue of fraudulent ship registries is "quite complex" because it involves public, international law as well as private, regional law.

"A multi-pronged approach would be necessary to effectively address the issue and the solution would involve making accurate information about the status of a nation's registry widely, quickly, and accurately available to shipowners and insurers as well as public officials," said the IMO summary. It was also suggested that effective enforcement measures to discourage the practice, and to prevent ships with fraudulent registration from operating, should be considered.

The legal committee requested the IMO Secretariat conduct a study on fraudulent flag cases that have been received so far, and to assess whether the IMO's Global Integrated Shipping Information System (GISIS) would be able to address the issue.

The GISIS, an IMO database that maintains 43 modules (with 20 open to the public) for tracking incidents involving marine casualties, pollution prevention, and maritime security, could be used to potentially include a list of national bodies authorised to issue certificates so that shipowners would be assured that the flag existed and had been verified and approved by the competent authorities with the IMO.

Member states also agreed that GISIS should be used as a tool to share information and transfer expertise and experience about registers facing fraudulent practices.

"If port state control [PSC] knows in advance that any ship flying the flag of the DRC, for example, is a fraudulent registry, they'd know to detain it right away," Kenney said. "The key is making sure PSC officers have the information they need to recommend detaining a fraudulently registered vessel. Having good information out there is the key to solving the problem."

LEG 105 agreed to include a new output and updates on "measures to prevent unlawful practices associated with the fraudulent registration and registries of ships" in the committee's 2018-19 biennial agenda, with a target completion year of 2021. It also invited concrete proposals to LEG 106 (scheduled to meet 25-29 March 2019) for consideration, and to decide on the scope of the update after considering the proposals.

"We're still awaiting submissions to the legal committee, and my anticipation is that we will begin to have working groups start addressing the problem," Kenney said, noting that the potential outcome could eventually include some kind of legal instrument.

"We'll have to look and see what gets put on the table. There are a lot of possibilities depending on what member states put forward, but something will likely come out of it," he said, suggesting an amendment to a treaty, guidelines, or a legal committee resolution.

While false registrations from Fiji, the DRC, and Micronesia have all dropped precipitously since the issue first gained attention three years ago, over the summer three new IMO member states fell victim to fraudulent registries: Tanzania, Maldives, and the Netherlands, according to IHS Markit data (see chart, below).

This concerning trend has member states with registries both large and small taking heed, including International Registries Inc. (IRI), a Reston, Virginia-based company that administers the flag on behalf of the South Pacific island nation of the Marshall Islands.

"It is indeed a safety and a security issue," IRI director of marketing and communications Laura Sherman told Fairplay, underscoring the legal committee's agreement that the fraudulent registration of ships, along with fraudulent schemes to sell fake registration documents from non-existent ship registries, are issues that need to be addressed.

"This practice could also have inadvertent consequences for unknowing seafarers and commercial users as well. The Republic of the Marshall Islands recognises the challenges of the issue, shares the concerns, and is actively part of the remediation plan."

As was emphasised by the seven member-state petitioners to LEG 105, as world trade expands and trade patterns shift, the problems related to maritime fraud become more complex and international. At the same time, they point out, there have already been measures taken up by governments and non-governmental organisations to combat maritime fraud, including exchanging information with the International Maritime Bureau of the International Chamber of Commerce.

The state petitioners warned that "there is still more to be done concerning fraudulent practices and there is a need to consider more efficient preventive measures".