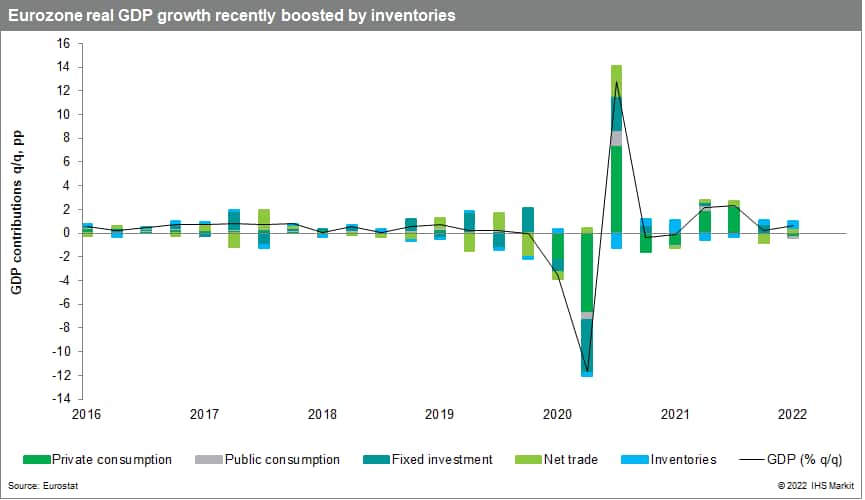 Eurostat's third estimate of eurozone real GDP in Q1 delivered an unusually large upward revision to the q/q rate of growth, from 0.3% to 0.6%. A deeper dive into the data beyond the headline revision suggests a more sober assessment is appropriate.

First, the initial breakdown by expenditure painted a rather worrying picture of domestic economic conditions.

Second, while on a y/y basis, eurozone real GDP growth rose from an already very elevated 4.7% up to 5.4%, y/y rates of growth in recent quarters have been flattered by base effects related to COVID-19-related disruptions a year previously. Those base effects will go into reverse in Q2 and Q3, resulting in a sharp slowdown in the y/y rates of change.

Third, although following Q1's increase eurozone real GDP surpassed its pre-pandemic level in Q4 2019 by 0.8%, the eurozone's recovery from the COVID-19 shock has underperformed the US and other advanced economies.

Fourth, Ireland's real GDP surged by almost 11% q/q in Q1, a one-off rebound following a steep drop in the prior quarter, powered by external trade. Domestic demand actually declined. Excluding the exceptional contribution from Ireland, the q/q rise in eurozone real GDP would have been less than half the reported 0.6%.

The key takeaway from Q1's expenditure breakdown for the eurozone was the key role of inventories and net trade in boosting the q/q growth rate. Inventories contributed 0.6 percentage points to the q/q rate of increase in real GDP. This followed a 0.4 percentage point contribution in the prior quarter.

Net trade contributed 0.2 percentage points to the q/q growth rate in Q1. This was partly because imports fell by 0.6% q/q, the first decline in seven quarters. Following Q1's data, exports exceeded their pre-pandemic level in Q4 2019 by 4.1% but imports were 0.1% below (see chart), consistent with weakness in domestic demand.

Public consumption declined by 0.3% q/q in Q1, the first fall in four quarters, though it remained 5% above its Q4 2019 level, having been boosted by multiple support measures aimed at countering the effects of the COVID-19 shock.

Still, in sum, eurozone domestic final demand contracted by 0.3% in Q1, the first fall in four quarters, and the outlook looks challenging. 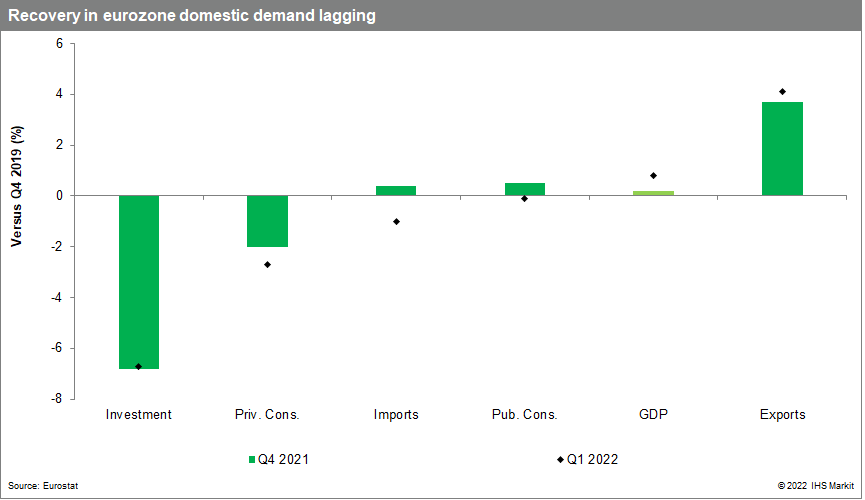 Our current forecasts for annual real GDP growth in the eurozone in 2022 and 2023 are 2.5% and 1.8%, respectively, below the market consensus expectation in both years. We markedly reduced our growth forecasts back in March following Russia's invasion of Ukraine. While Q1's positive surprise suggests this year's growth rate could actually turn out a little higher than forecast, we are increasingly worried about 2023 and see the risks skewed to the downside.

Private consumption is being hit by an ongoing extreme squeeze on household real incomes as inflation rates soar, with consumer confidence having weakened markedly to match the lows seen during the COVID-19 shock and the GFC. While various factors, including excess household savings and pent-up demand for some services, have been cushioning the blow, the appetite to continue to run down savings to consume is likely to wither.

Our own PMI data tell us that strong pent-up demand for the services restricted by COVID-19 - travel and tourism, recreation - will support growth near-term. However, that effect will fade after the summer, when the eurozone economy will likely start to show the adverse effects of a number of headwinds, including household income constraints, persistent high uncertainty, tightening credit conditions and higher energy costs. Simulations via our Global Link Model suggest a sustained rise in oil and gas prices later in the year could be the straw that breaks the camel's back, tipping the eurozone into recession.