Are European housing markets getting too hot?

The coronavirus disease 2019 (COVID-19) virus pandemic has caused steep economic output declines in many European economies, but house prices this time did not follow the same trajectory. On the contrary, house price growth accelerated in 2020 and annual eurozone house price growth in the second quarter of 2021 reached 6.8% year on year (y/y), the highest since 2006.

Housing markets this time were supported by the limited impact of the pandemic on household finances. First, the crisis has affected different sectors and different professions asymmetrically; in most cases, individuals with a higher income were affected much less and experienced a continued rise in their income. Moreover, vast fiscal support, including furlough schemes and moratoria on loan repayments, has preserved the income of employees in the most affected sectors, limiting the negative effects on employment and income.

At the same time amid the closure of retail outlets, and especially services and stringent restrictions on them, household savings boomed. The savings rate in the eurozone jumped from around 13% to 25% of disposable income in the second quarter of 2020 and remained elevated.

Moreover, contrary to 2008's global financial crisis (GFC) and the subsequent sovereign debt crisis in the eurozone in 2010-2012, financing conditions were not negatively affected during the pandemic. The stock of mortgages continued rising and interest rates remained at low levels.

However, house prices rose faster than income in most European countries, according to Organisation for Economic Co-operation and Development (OECD) data (see Chart 2). The price-to-income ratios have risen the most in the Netherlands, Sweden, Austria, Germany, and Luxembourg; they all experienced higher than 10% y/y rise in house prices in the second quarter of 2021.

Some countries are more vulnerable to excessive house price growth and mortgage lending growth, with possible price correction leading to most disruption in the most highly indebted countries. In general, the indebtedness of households is higher in Western Europe and lower in Emerging Europe. Households in Denmark, Switzerland, the Netherlands, Luxembourg, and Sweden are among the most indebted in the world. Debt levels in these countries comprise 170-215% of income, compared with 100-120% in the United Kingdom, the United States, and Japan.

IHS Markit housing heat index ranks countries in terms of house price and mortgage growth and the level of price to income, and household debt to income. The index suggests that Luxembourg, Sweden, the Netherlands, Czechia, and Denmark are potentially the most vulnerable to adverse developments in housing markets. 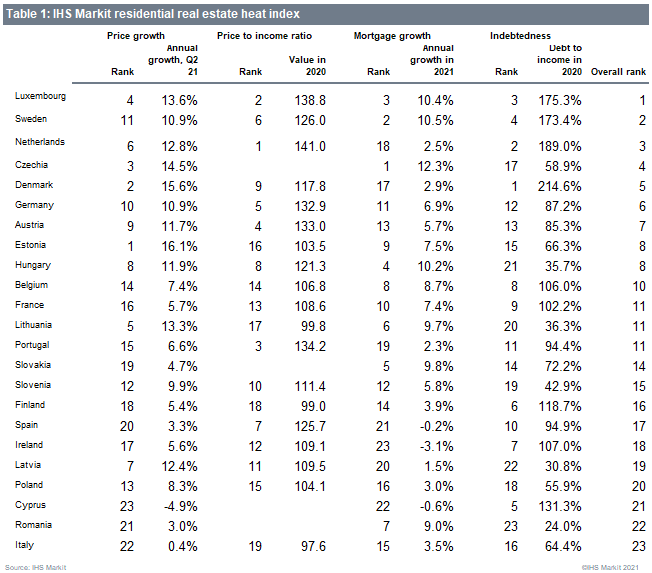 According to the ESRB, residential property is overvalued in all of the countries highlighted above. The highest over-valuation is estimated in Sweden, Luxembourg, and Czechia. The ESRB had already issued warnings for Denmark and Germany (the sixth country in the IHS Markit housing market heat index) in 2019 owing to systemic risks arising from overvaluation and rapid house price and credit growth.

IHS Markit expects price pressures in residential real estate markets to ease - and risks to remain manageable going forward - for various reasons, including the improved macroprudential framework in Europe, the phasing out of pandemic support, an increased supply of housing, and bottoming out of interest rates. However, some countries remain more vulnerable to price corrections owing to their high indebtedness and prices that have risen much faster than incomes.

Countries such as Luxembourg, Sweden, the Netherlands, Czechia, and Denmark appear particularly vulnerable to decreasing income and/or rising interest rates. A boom-bust scenario is more likely there due to excessive price and mortgage growth and the relatively high indebtedness of households. Corrections in house prices would result in vicious cycles of defaults, credit losses, worsening of financing conditions, decreasing investments, negative spillover effects to other sectors, and further income losses, amplifying the economic downturns.

In our baseline scenario, we do not forecast the factors that would trigger a correction - including interest rate shock (especially in Western European economies) and/or economic downturn - to materialize.

The risks will need to be monitored closely, however. Although IHS Markit does not forecast deep or long-lasting economic downturns, continued uncertainty regarding the pandemic, supply chain disruption, and rising inflation make the near-term growth forecasts bleaker. High inflation has already triggered interest rate hikes in Emerging European countries.

RT @SPGlobalPMI: 🇬🇧 Weak #PMI numbers in January underline the risk that the #UK will slip into a recession, amid industrial disputes, staf…

RT @SPGlobalPMI: 🇺🇸 The #US began 2023 on a sour note, according to initial #PMI indicators, with business activity contracting sharply aga…

"Food price #inflation is not expected to soften to any significant degree.” Great to see Arlene Kish, chief Cana… https://t.co/1rjlNYqApH