The U.S. started it. Japan and South Korea followed. India joined in, too. Many countries are triggering releases of strategic petroleum reserves to temper rising oil prices ahead of OPEC’s next meeting. But will the actions be enough to cool oil markets before year-end?

U.S. President Joe Biden has blamed OPEC for the market situation, criticizing the group’s restriction of its members’ oil output as the source of record-high oil prices. President Biden has tried pressuring the coalition with the support of other oil-consuming countries to increase its supply. After getting rebuffed by OPEC, U.S. leaders sought other options to ease prices, asking the Federal Trade Commission to investigate oil and gas companies' role in high prices at the pump and dipping into the country’s SPR.

The Biden Administration announced on Nov. 23 that it will discharge 50 million barrels from the approximately 600 million barrel-strong SPR by early next year in a coordinated release with Asian economies, spanning China, India, Japan, and South Korea, that together may total 70 million barrels pushed into the market.

U.S. presidents have turned to the SPR in the past to respond to global supply shocks such as those during Hurricane Katrina in 2005 and the Libya war in 2011, according to S&P Global Platts. China said last week that it will release oil stocks from its SPR based on its national needs. A source in South Korea’s Ministry of Foreign Affairs and the Ministry of Trade, Industry and Energy told S&P Global Platts that the country could release about 4% its 96 million barrels SPR, equivalent to around 3.8 million barrels.

The coordinated release could influence whether OPEC and its allies withdraw their planned crude-output hike of 400,000 barrels per day, a decision markets expect to be announced this week. OPEC’s leader, Saudi Energy Minister Prince Abdulaziz bin Salman, has previously stated that OPEC “for the first time” is “limited” in its ability to mitigate rising oil prices.

OPEC is scheduled to meet on Dec. 1 with the larger OPEC+ discussions on Dec. 2.  Market observers have suggested that OPEC+ could offset the multi-country SPR release by postponing or canceling its planned output increase. OPEC+ sources told S&P Global Platts that despite how "all options are on the table,” ministers and delegates are split on how to respond to the SPR release. Against the backdrop of the potential implications of the omicron coronavirus variant discovery, the United Arab Emirates and Kuwait said in separate Nov. 25 statements that the Middle Eastern oil producers would support whatever the collective OPEC+ decision is, according to S&P Global Platts.

“OPEC+ is weighing its supply options after the U.S.-led attempt to lower prices by releasing stocks has been complicated by major a sell-off after resurgent COVID-pandemic fears. How it responds will set the tone for oil markets in 2022,” S&P Global Platts senior writer and chief OPEC correspondent Herman Wang said in a commentary today. “Holding back planned quota increases at its next meeting on Dec. 1-2 will make the producer group look mean and increasingly blamed for causing rampant global inflation that is now endangering the still fragile economic recovery. Yet, some members are still calling for an aggressive response to the coordinated 70-million-barrel Strategic Petroleum Reserve release, which is equivalent to about two days-worth of OPEC+ output.”

An aggressive response from OPEC+ could inflame its already-tense relationship with the U.S., but ignoring the SPR release could also be risky, according to Mr. Wang.

Oil market participants are increasingly worried about the return of prices surging upward of $90 per barrel and reaching $100 per barrel before year-end. However, market reactions to the coordinated SPR released have been mixed. Many view the effort as unlikely to reel back oil prices, while others appreciate the action as a necessary global policy step.

"Stabilizing the crude oil price is an important factor for realizing economic recovery from the coronavirus pandemic," Japan’s Chief Cabinet Secretary Hirokazu Matsuno said during a Nov. 24 press conference, according to S&P Global Platts. "We are advancing our planned sales of crude grades for replacement by taking into account situations such as high crude oil price and cooperation with the U.S."

"Asia's SPR release was below expectations, and it is [even understood to be] an exchange deal,” a crude trader based in Singapore told S&P Global Platts. “Buyers need to return the oil in 2022 to 2024.”

"I don't think we are changing the plan [to increase OPEC+’s crude oil output by 400,000 barrels per day next month … As of now, we are going to meet on [Dec. 2, and] we will look at the facts, we will look at the volumes in the market, and we will take the decision based on those facts,” UAE energy minister Suhail al-Mazrouei said Nov. 23 at the Expo 2020 in Dubai. "We are meeting as planned … We are looking at all of the technical data, and all of them are suggesting that we will have a surplus in the first quarter, so there is no logic in increasing our contribution."


Today is Tuesday, November 30, 2021, and here is today’s essential intelligence. 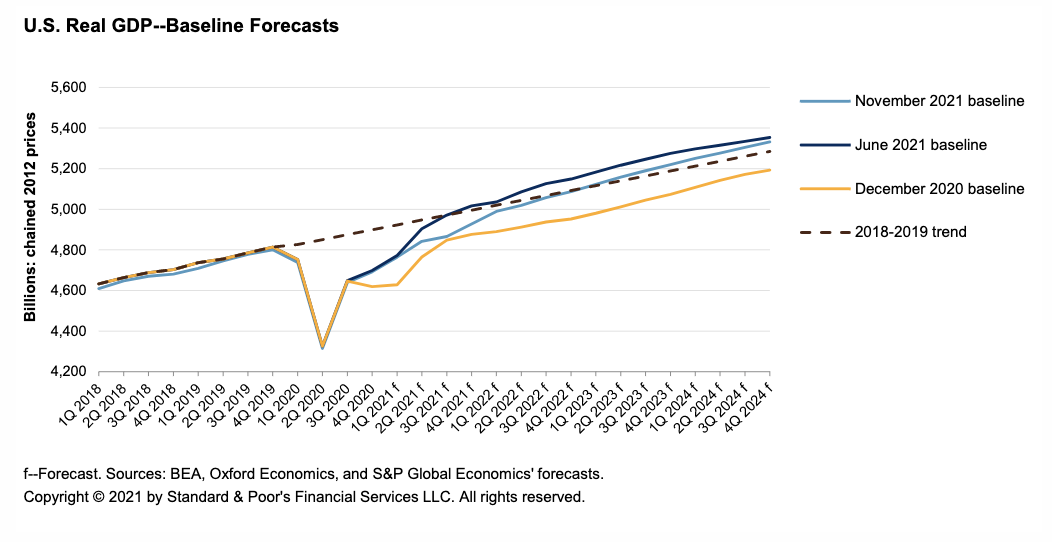 The U.S. economy picked up in the fourth quarter as COVID-19 infection rates subsided and vaccination rollouts progressed, allowing more people to get outside and spend. People have shown a willingness to forgive retailers for the higher prices as they prepare for long overdue visits with family this holiday season.

The Texas manufacturing sector accelerated its expansion in November, a new survey from the Federal Reserve Bank of Dallas released Nov. 29 shows, which appears to be reflected in year-on-year increases in power demand and prices. The Dallas Fed's Texas Manufacturing Outlook Survey shows a production index of 27.4%, up from October's 18.3% and November 2020's 8.7%.

Insurers' COVID-19 Claims Battle Far From Over In U.K. As Big Cases Loom

Insurers and reinsurers may have to wait several years before they know the ultimate bill for COVID-19-related business interruption claims in the U.K. as a series of potentially expensive cases head to court in 2022. "It would not surprise me if this was a decadelong issue," Naz Gauri, principal associate in law firm Eversheds Sutherland's insurance litigation team, said in an interview. 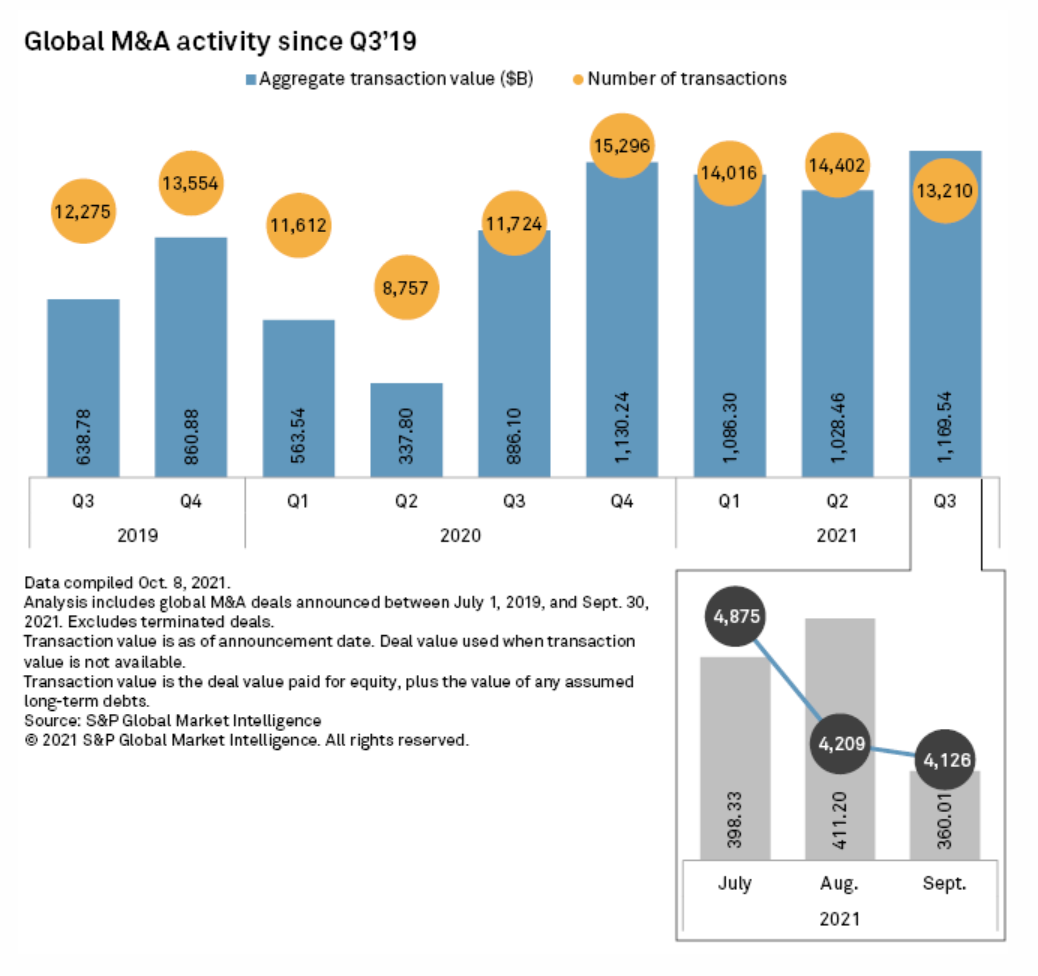 The third quarter marked the fourth straight period in which the total announced value of global M&A activity topped $1 trillion. Before this streak, deal announcements had not crossed the $1 trillion threshold for three consecutive quarters, according to S&P Global Market Intelligence data that dates back to the 1990s. 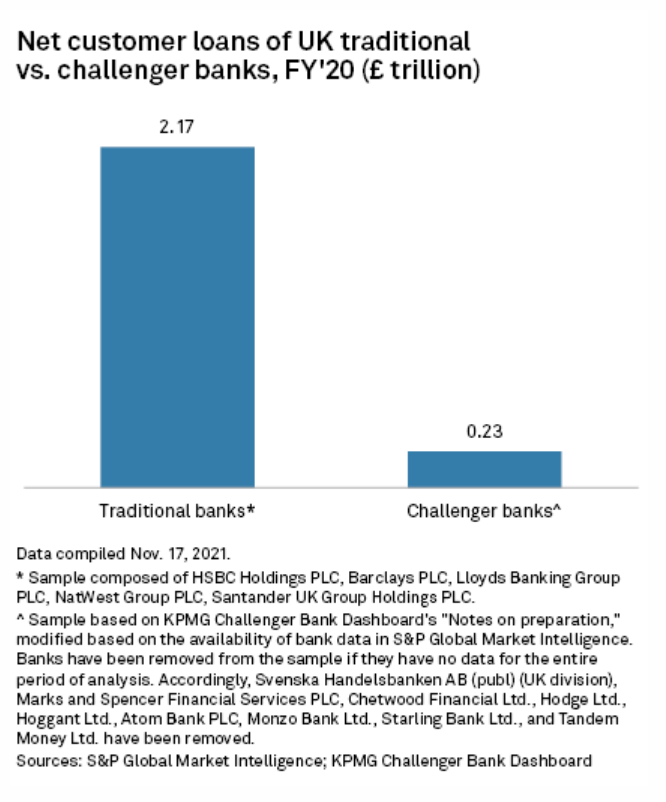 Earnings of Indian banks will get a boost from easing nonperforming loans and the nation's economic recovery that will drive demand for credit. Many large banks saw their nonperforming loan ratios decline "as new NPL formation was more than offset by recoveries on retail loans," said Nikita Anand, an analyst at S&P Global Ratings, after both private-sector and government-owned banks reported an improvement in overall asset quality in the fiscal second quarter that ended Sept. 30.

Liechtenstein private bank VP Bank AG is doubling down its efforts in Asia to capture the region's growing wealth, top executives said in an interview with S&P Global Market Intelligence. The European wealth manager this year has expanded its leadership team in Asia, after combining the senior management of its Singapore and Hong Kong offices.

Bank stocks and bank M&A activity have rebounded strongly from the depths of the pandemic and the factors driving the resurgence remain in place, according to KBW CEO Tom Michaud. KBW, which is a unit of Stifel Financial Corp., has benefited from the resurgence in bank M&A activity, having advised on eight of the 10 largest deals announced since the start of 2020. 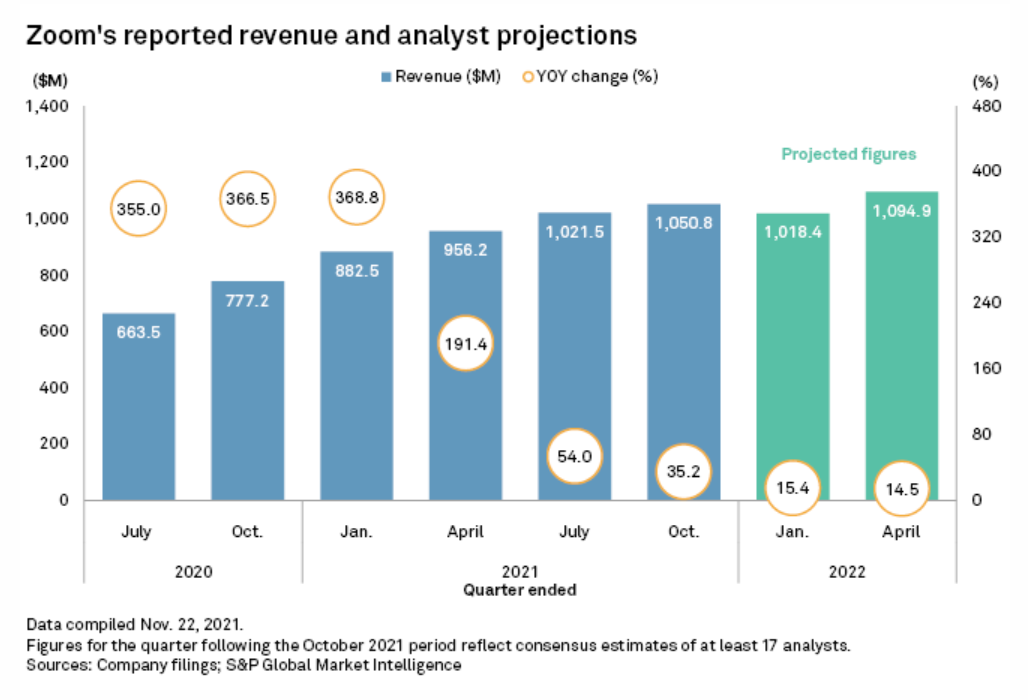 Zoom Video Communications Inc. continued its streak of delivering better-than-expected earnings, but the company's stock plunged amid concerns around diminishing revenue growth. The COVID-19 pandemic turbocharged the demand for videoconferencing tools and collaboration applications in 2020, allowing Zoom to swoop in and transform itself from a relatively niche provider of business software to a household name.

The clock phase of the latest mid-band spectrum auction finally ticked down, and everyone is speculating about who spent what. After 151 rounds and $21.9 billion in total proceeds, the Federal Communications Commission's auction of 100 MHz of contiguous spectrum in the 3.45 GHz band concluded its clock phase earlier this month.

Lawmakers are increasingly scrutinizing how companies like Meta Platforms Inc.'s Facebook use algorithms to push certain content into users' newsfeeds, and they are introducing legislation that would hold those platforms accountable for misinformation and posts promoting harm.

With the evolving nature of environmental, social, and governance factors, S&P Global Ratings believes certain risks may be more influential and material to creditworthiness for U.S. public finance issuers in 2022 and could lead to credit pressure.

North American electric utilities could flood the M&A market with contracted renewables portfolios in 2022 as those assets fetch attractive prices and the trend toward pure-play, investor-owned, and regulated rate bases persists. While there may be some corporate-level and whole-subsidiary transactions, minority stake transactions and contracted renewable power asset recycling will likely dominate deal-making in the coming calendar year, industry equity analysts said.

More ambitious and concrete hydrogen policy efforts are needed from governments across Europe and beyond to bridge a wide gap between the current market trajectory and the projects needed to meet net-zero targets, the International Energy Agency said at the S&P Global Platts Hydrogen Markets Europe Conference Nov. 26. —Watch and share this Market Movers from S&P Global Platts

Iran is set to boost its crude oil capacity to 4 million b/d by March 2022, returning to levels not seen since before the U.S. withdrew from the nuclear deal and re-imposed sanctions on the country's crude sales in 2018, the oil ministry's news service Shana reported Nov. 28.

Saudi Aramco expects its Jafurah shale play to yield up to 2 Bcf/d of gas, 418 MMcf/d of ethane, and 630,000 boe/d of gas liquids and condensates by 2030, as the company ramps up its development of unconventional resources. Awarding engineering and construction contracts worth $10 billion for work at the field on Nov. 29, Saudi Aramco said the projects will expand its gas production, while also providing feedstock to support growth in its chemicals and hydrogen sectors.