As the race to find a cure for the coronavirus speeds ahead, some potential vaccines show promise.

The immunization developed by Oxford University and the British-Swedish pharmaceutical company AstraZeneca triggered hopeful outcomes in its clinical trials. The vaccine tested by the Chinese company CanSino Biologics in partnership with the country’s military also produced positive responses.

Combining genetic components of the coronavirus with an adenovirus common to chimpanzees, the AZD1222 vaccine tested by Oxford and AstraZeneca was “safe, tolerated, and immunogenic” for all 1,077 participants aged 18 to 55, according to a study published yesterday in The Lancet. All people involved in the clinical trial experienced a T-cell response within two weeks of being vaccinated. After 91% of participants developed antibodies to the coronavirus within 28 days, researchers introduced a booster shot that provoked an antibody response in 100% of the participants.

“We saw the strongest immune response in the 10 participants who received two doses of the vaccine, indicating that this might be a good strategy for vaccination,” Oxford Professor Andrew J. Pollard, a researcher in the Oxford COVID Vaccine Trial Group, said.

“We are encouraged by the Phase 1/2 interim data showing AZD1222 was capable of generating a rapid antibody and T-cell response against SARS-CoV-2,” Mene Pangalos, executive vice president of BioPharmaceuticals Research and Development at AstraZeneca, said in a July 20 statement. “While there is more work to be done, today’s data increases our confidence that the vaccine will work and allows us to continue our plans to manufacture the vaccine at scale for broad and equitable access around the world.”

Oxford and AstraZeneca partnered with clinical groups in the U.S. to enroll 30,000 participants in the second phase of trials starting next week, and have started the third phase of vaccination testing in emerging market economies, including Brazil and South Africa. “The preliminary results of this first-in-human clinical trial supported clinical development progression into ongoing Phase 2 and 3 trials,” the study said.

“The fact that we have so many promising candidates already shows the unprecedented pace at which we are moving. But I urge against being complacent or over optimistic,” Kate Bingham, chair of the U.K.’s Vaccine Taskforce, said in July 20 statement. “The fact remains we may never get a vaccine, and if we do get one, we have to be prepared that it may not be a vaccine which prevents getting the virus, but rather one that reduces symptoms.”

“A safe and effective vaccine is our best hope of defeating coronavirus and returning to life as normal,” U.K. Health Secretary Matt Hancock said.

CanSino tested its vaccine, Ad5-nCOV, in 508 subjects in a “randomized, double-blind, placebo-controlled, phase 2 trial” in Wuhan, China, in which “both doses of the vaccine induced significant neutralizing antibody responses” to the live coronavirus infection with “no serious adverse reactions,” according to a study also published in Lancet on July 20.

The researchers consider pre-existing immunity to be the biggest obstacle for the Ad5-nCOV vaccine to overcome.

“Unlike typical vaccine development, which often takes decades, developing a vaccine to prevent COVID-19 has become a race between humans and the virus,” CanSino researchers said in their study. “Many countries have accelerated the process of clinical trials to determine an effective and safe vaccine to prevent COVID-19 and influence the course of the current pandemic. Currently, about 250 candidate vaccines against SARS-CoV-2 are in development worldwide. To date, at least 17 of these vaccine candidates are under evaluation in clinical trials.”

Today is Tuesday, July 21, 2020, and here is today’s essential intelligence.

Perceptions of Hong Kong's distinct advantages, which attracted investment and talent from around the world, risk being diluted by policy uncertainty, social unrest, and rising competition from the Greater Bay Area. S&P Global Ratings estimates that some erosion in comparative advantage, together with rapid aging, will cause potential growth to fall from about 2.7% in 2018 to 1.1% by 2030. Hong Kong's real exchange rate will likely depreciate. In a plausible, moderate downside scenario, trend growth could be zero by 2030.

Germany has the second-largest covered bond market behind Denmark and the largest euro benchmark market, with outstanding issuances totaling €355 billion in 2020. German covered bonds are well insulated from the risk of bank downgrades, and in light of the current economic environment due to COVID-19, our hypothetical scenarios show German covered bonds can withstand substantial residential house-price corrections. Although the Pfandbrief is famous for its stable performance, cover pools evolve, and the asset composition and available overcollateralization of some programs are much more volatile than others. The current economic environment may therefore affect programs differently. 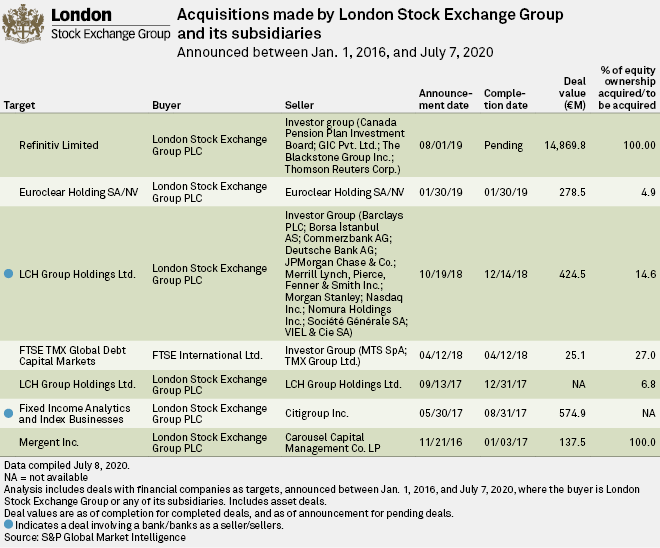 The coronavirus pandemic is not likely to stop the M&A spree that Europe's top three stock market operators — London Stock Exchange Group PLC, Euronext NV and Deutsche Börse AG — have been on in the past few years. Although the health crisis caused a slump in global M&A activity in the first half of 2020, it has not affected the deal-making appetite in the European financial market infrastructure space. M&A as a means to achieve scale remains attractive to the sector despite the pandemic, law firm White & Case said in its first-half M&A trends report released July 13, highlighting the "aggressive M&A plans" of LSE, Euronext and Deutsche Börse. 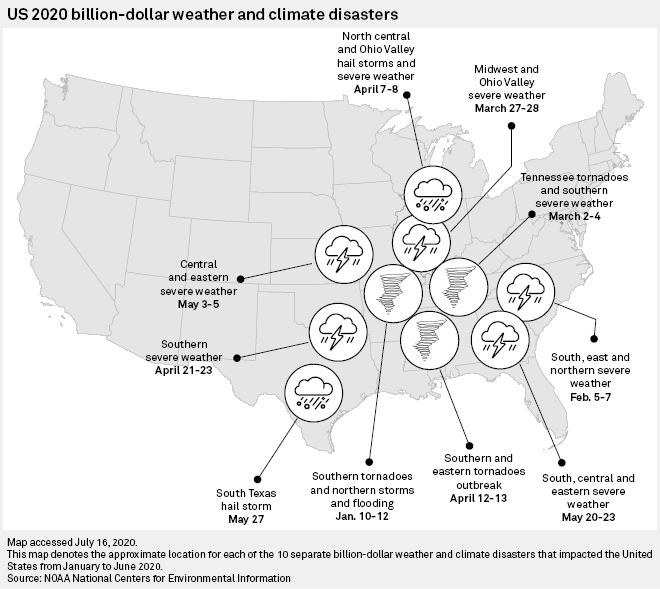 Even as climate change exacerbates the risk around extreme weather, U.S. telecommunications giants AT&T Inc. and Verizon Communications Inc. say technology upgrades and infrastructure investments have positioned the companies to better weather the coming storms. The 2020 Atlantic hurricane season is expected to be "above normal," producing between 13 and 19 named storms, versus the annual average of 12, according to forecasts from the National Oceanic and Atmospheric Administration's Climate Prediction Center. And beyond hurricanes, NOAA National Centers for Environmental Information says there have already been 10 weather and climate disaster events with losses exceeding $1 billion in 2020, well above the annual average of 6.6, despite it only being July.

Amid a broader national conversation around police reform, large technology companies announced plans to scale back or pause sale of facial recognition technology to police departments. Experts and industry officials, however, said the announcements alone are unlikely to make much of an impact on the sector. The 2020 Atlantic hurricane season is expected to be "above normal," producing between 13 and 19 named storms, versus the annual average of 12, according to forecasts from the National Oceanic and Atmospheric Administration's Climate Prediction Center. And beyond hurricanes, NOAA National Centers for Environmental Information says there have already been 10 weather and climate disaster events with losses exceeding $1 billion in 2020, well above the annual average of 6.6, despite it only being July.

The response to the COVID-19 pandemic will accelerate growth in telemedicine and home internet of things healthcare revenue more broadly, as the U.S. government's response drives a nearly 31% CAGR in Kagan's recently released five-year forecast. Revenue is expected to grow from $628.3 million in 2019 to $2.40 billion in 2024. Though home IoT healthcare is not exclusively for the elderly, that population will make up a vast majority of IoT revenue over the forecast period, with nearly two-thirds stemming from those ages 65 and over in 2019. That percentage is expected to increase to nearly 75% of revenue by 2024 due to two factors. First, the COVID-19 pandemic and responses highlight the particular vulnerability of the elderly. As their primary insurer is Medicare, the U.S. government response is key, and the implications on IoT healthcare in the home will be felt by everyone from medical-device makers to communications service providers. 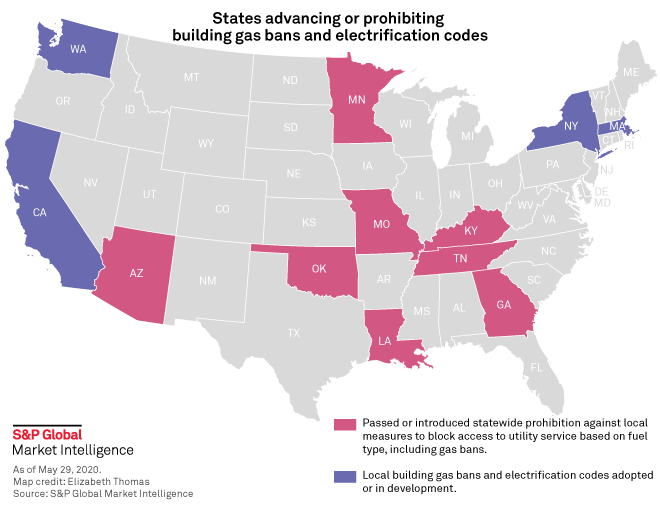 Environmentalists and ratepayer advocates implored utility regulators to begin retiring natural gas distribution systems, warning that any failure to plan for a shift to electrification in buildings puts low-income ratepayers and communities of color at risk. The groups made their case during a panel on gas bans hosted by the National Association of Regulatory Utility Commissioners, or NARUC. With building electrification already underway and gaining momentum, regulators should guide the transition to prevent people with low incomes from being stuck in a "death spiral" in which the cost of service rises for a shrinking customer base as affluent Americans exit the gas utility system, the panelists said.

US Department of Energy announces funding for several hydrogen projects

Cummins, Plug Power, Caterpillar, Nikola, 3M and Hornblower Yachts are among the companies who will receive funding from the US Department of Energy for various hydrogen research projects, the department announced July 20. Roughly $64 million will be passed out for 18 different projects that support the department's H2@Scale initiative, which targets research and development for affordable hydrogen production, storage, distribution and use.

On June 26, Milwaukee-headquartered WEC filed an application with the Federal Energy Regulatory Commission to acquire a 90% stake in the 260.9-MW Blooming Grove Wind Energy Center in McLean County, Ill., from Invenergy, the latest in a string of similar transactions. With gas and coal accounting for 84% of WEC's total generation, the company has embarked on a five-year plan to invest $1.8 billion in renewables. Since 2018, WEC has agreed to acquire a raft of wind projects from Invenergy, a frequent development partner, with purchases from the Chicago-based company representing all of WEC's new renewable energy acquisitions since the beginning of 2019. The partnership stretches back to WEC subsidiary Wisconsin Public Service Corp.'s purchase of a 44.6% stake in the 129-MW Forward Energy Center wind project, which was agreed to in 2017 and closed the following year.

—Watch and share this video from S&P Global Platts

The developer of the Nord Stream 2 gas pipeline said July 20 the investments needed to complete the 55 Bcm/year link could be blocked if the US imposed sanctions against companies involved in the project. In a hardening of its position against Russian energy export projects, the US State Department on July 15 updated part of its Countering America's Adversaries Through Sanctions Act (CAATSA) legislation from August 2017. Companies involving in building the Nord Stream 2 link to Germany and the second line of the TurkStream pipeline to southern Europe -- both still under construction -- can now be targeted, whereas before they were exempted from potential measures under the CAATSA legislation.

Listen: How the oil wars myth continues to shape US foreign policy

US President Donald Trump has used the phrase "take the oil" many times, both as a candidate to criticize previous administrations' strategies in Iraq and while in the White House when discussing Syria. Emily Meierding, an assistant professor at the Naval Postgraduate School, analyzed more than 600 international military disputes between 1912 and 2010, and determined that classic oil wars are a myth.