The global exploration budget for nonferrous metals increased to an estimated US$10.1 billion in 2018 from US$8.5 billion in 2017.

Policy uncertainty in China, the evolution of the U.S.-China trade war and economic growth fears caused most metal prices to pull back throughout the year before stabilizing near year-end.

Mar. 15 2019 — The global exploration budget for nonferrous metals rose to an estimated US$10.1 billion in 2018, representing 19% growth year over year (YOY) compared with US$8.5 billion in 2017, according to the World Exploration Trends 2018 report from S&P Global Market Intelligence.

Gold accounted for half of global budgets in 2018 with an increase of 18% year-over-year. On the other hand, lithium exploration budgets reached a new high of US$247.1 million, while cobalt saw the largest percentage increase of any commodity, more than tripling in 2018. 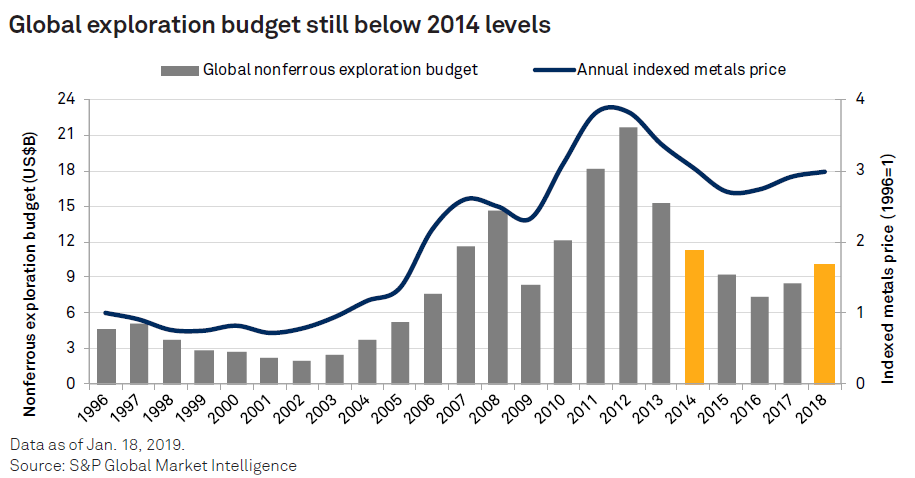 While this strength continued into early 2018 as metal prices continued to rise, the exploration sector experienced some weakness in mid-year. Financing activity declined and our Exploration Price Index pulled back as many metals saw first half gains undone, although, importantly, both indicators remained well above their levels seen in 2015 and 2016. Despite the appearance of adverse signs, companies continued to report exploration results at an elevated rate. The close of 2018 saw a return to upward momentum for most metrics, although company market caps continued on a downward trend.

So what does this mean? Although uncertainty still abounds over the sustainability of economic growth between the U.S. and China, we should see a general upward trend as the positive underlying fundamentals for most metals encourage increased activity. We expect the global exploration budget to increase in 2019 for a third consecutive year, although by a smaller amount of 5% to 10% — likely again emphasizing late-stage exploration as the industry remains risk-averse.

Unlock the essential intelligence on world exploration trends to make decisions with confidence.