Continued smartphone reliability improvements and slow subscriber growth due to market saturation in some regions have continued to impact smartphone shipments worldwide.

Aug. 04 2017 — Continued smartphone reliability improvements and slow subscriber growth due to market saturation in some regions have continued to impact smartphone shipments worldwide. Worldwide shipments grew only 2.1% between 2015 and 2016 and are projected to grow only 2.8% in 2017. In prior years, growth has been more robust — for instance, between 2014 and 2015, the market grew 10.3%. Samsung Electronics Co Ltd and Apple Inc. led in market share in 2016, though both saw declines as Chinese smartphone makers continued to see gains from 2015. Some new technologies are expected to appear during the forecast period, including the gigabit-speed wireless connectivity standard WiGig, 360-degree cameras and flexible displays. While these may buoy the market, saturation will continue to outweigh any substantial gains seen from technology advancement, as the smartphone experience will not change enough to drive a massive increase in sales. 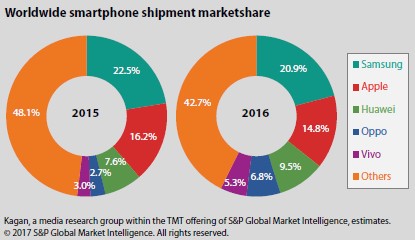 The majority of manufacturers lost market share between 2015 and 2016. The lack of differentiation between Android manufacturers has resulted in paper thin margins for budget and mid-tier handsets. Chinese manufacturers Oppo and Vivo have gained significant share with their budget smartphones, capturing a large chunk of the Asia Pacific market, particularly China and India. As we've seen in other markets like PCs and smart TVs, the commoditization of a large part of the smartphone market will undoubtedly result in some players exiting the market.

While Samsung and Apple lost market share between 2015 and 2016, both are expected to turn their declining numbers around during 2017. Samsung lost a lot of market share because of the recall due to a battery issue found in its Galaxy Note 7 smartphone in the third quarter of 2016. Consumers have had short memories in the past when it comes to smartphone issues (see Apple's antenna issues with the iPhone 4) and it is likely that Samsung will be able to increase its market share in 2017 as it recovers from last year.

Meanwhile, Apple is expected to launch a redesigned iPhone this fall, creating significant sales increases thereafter. Lots of rumors are, of course, circulating around the device, but the most plausible are easy to discern. Foremost would have to be the purported use of 3D facial recognition in lieu of a fingerprint for security purposes. Resulting from that decision, it appears likely that Apple will remove the home button altogether in order to achieve a device aesthetic where the screen takes up the maximum amount of viewable area. Also notable is the likely inclusion of wireless charging, which would bring Apple up to par on that feature with top-shelf Android devices that have included this technology for some time now.

A number of new technologies should help to buoy the market during the forecast period. First and most significant are flexible displays. Flexible displays have been seen around tradeshows for some time, but have not yet been included with any smartphone. The many issues related to integrating a novel new component into a device seem to be resolving, which should result in some interesting smartphone shapes and sizes from manufacturers.

Flexible displays are different than the curved screens sometimes seen in recent top-end smartphones, like Samsung's Galaxy S8. Unlike the Galaxy S8's static curved screen, flexible screens are dynamic and can be folded, bent or rolled. This will enable a change in form factor beyond the traditional "candy bar" style smartphones, resulting in phones with much greater screen areas. This will likely have a negative impact on the already beleaguered tablet market, escalating its rate of decline as the increased screen size of smartphones eliminates a key selling point of most tablets. Phones with screens that can be bent or folded are expected to come to market over the next two to three years, though significant quantities will probably not be shipped until the tail end of the forecast period.

WiGig (also known as 802.11ad) is another important technology coming to smartphones during the forecast period. What makes WiGig so unique among wireless protocols are the characteristics of the frequency band in which it operates (60 GHz). The protocol has a short range, little to no interference, high data throughput (up to 4.6 Gbps) and very low latency. However, the 60 GHz band doesn't penetrate solid objects (e.g. walls) very well, so a WiGig connection is best maintained by having both the transmitting and receiving devices in the same room or contained area. Beamforming technology is part of the protocol, so there does not need to be a direct line-of-sight between devices. Instead, the signal can be "steered" to avoid solid objects that interfere.

WiGig is also important not for its expansion on current Wi-Fi usage patterns in the home, but for its importance as part of the set of standards delivering next generation wireless services under the amorphous label of "5G." A proposed standard, 802.11ay, will make significant changes to the existing 802.11ad (WiGig) standard by adding features that enable both higher aggregate (20-40 Gbps) and individual (7-10 Gbps) device throughput rates and extended range (300-500m in open areas). With these new features WiGig public hotspots (with the 802.11ay enhancements) should play a key role in the delivery of "5G" wireless services. Clients can view more information on WiGig here (requires a subscription).

360 degree cameras are, essentially, two fish-eye cameras stuck back to back, often with some attached processing for stitching the images into one coherent image/file. The current smartphones with integrated 360 degree cameras are quite bulky, resulting in devices that are thick, long and visually unappealing. Larger manufacturers will most likely wait until they can sort through the design issues, potentially waiting on flexible screen technologies to become more mature. Flexible screens could give their designers the ability to integrate 360 degree cameras into a more visually appealing package.