Nationwide, cooling degree days, or CDDs, for August were 6% below year-ago levels and 14% above the norm for the month. As seen in the map below and in the attached excel table, regional variations were present within the New England, Middle Atlantic, East North Central and West North Central regions, along with the West coast, but all experienced milder weather last month versus August 2018. Conversely, many of the southern and southwestern states saw hotter year-over-year temperatures during the month. Utilities in those areas benefited from higher air conditioning sales, which could bolster third quarter profits. 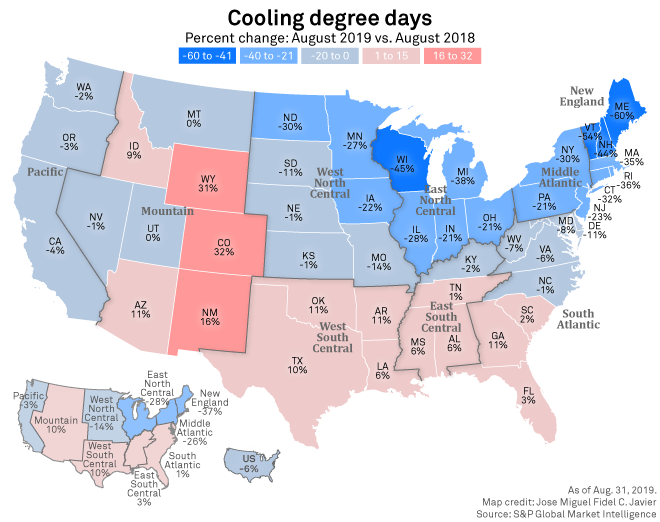 Third quarter sales and earnings versus 2018 still a wild card

The graph below depicts 2018's monthly CDDs relative to the monthly norm for the upcoming peak summer air conditioning months of July and August. Last summer was notably very hot, with CDDs exceeding normal levels during each month of the cooling season, with most months posting meaningful increases year over year. From a quarterly perspective, CDDs in the third quarter of 2018 were 15% greater than the prior-year level and 26% above normal. The hottest weather last summer was recorded in the New England and East North Central regions, where CDDs were a robust 53% and 37% above comparable levels in 2017, respectively. 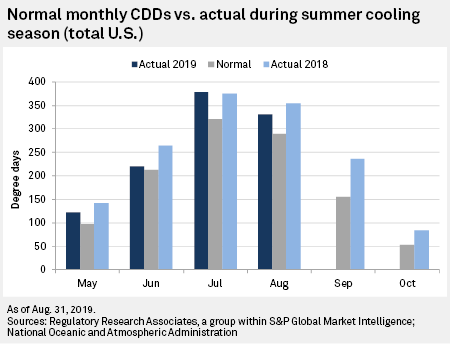 Last summer was notably very hot, with CDDs exceeding normal levels during each month of the cooling season, as seen in the graph above; most months posted meaningful increases year over year, including the peak summer air conditioning months of August and September. From a quarterly perspective, CDDs in the third quarter 2018 were 15% greater than the prior-year and 26% above normal. The hottest weather last summer was recorded in the New England and East North Central regions, where CDDs were a robust 53% and 37% above 2017 levels, respectively.

Not unexpectedly, many electric companies benefited from last summer's heat, posting earnings that averaged more than 10% above those of third quarter 2017. The degree to which utilities count on the third quarter to bolster financial results varies by company, operating territory and regulatory decoupling mechanisms in place, among other factors. The table below shows the population-weighted norms of cooling and heating degree days for the U.S. and the percentages applicable to calendar-year quarters. Under normal weather conditions, the third quarter is the most important in terms of CDDs, followed by the second quarter. In terms of HDDs, the first quarter accounts for one-half of the annual norm, with the last quarter at 36% of the annual norm. 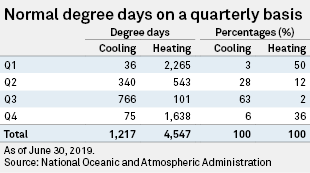 To provide further perspective on the importance of weather to utility profits, we look at second quarter earnings for the companies in the RRA utility universe. Adjusted earnings were down 5.1% year over year on average in the second calendar quarter of 2019. The quarter also saw a marginally cooler start to summer compared to the second quarter of 2018, with cooling degree days down 11% year over year despite remaining above normal levels. Several of the companies that had down-results blamed slower sales from mild weather on the lackluster results. For example, in Michigan, where second quarter 2019 CDDs were 62% below prior-year levels, DTE Energy’s results missed estimates by 10%, while CMS Energy came in 11% below profit expectations. In New Mexico, where the El Paso Electric Company derives much of its revenue, CDDs during the second quarter 2019 were 38% below 2018 and contributed to a 7% decline in year-over-year residential customer sales. The company’s second quarter EPS missed consensus estimates by 28%.

According to El Niño Southern Oscillation, or ENSO, reports issued Sept. 9, El Niño conditions that arrived in mid-February are no longer in place, and ENSO-neutral conditions are now present. Equatorial sea surface temperatures are above average across the western Pacific Ocean and below average in the eastern Pacific, and this pattern of anomalous convection and winds is generally consistent with ENSO-neutral conditions. The National Oceanic and Atmospheric Administration, or NOAA, forecasts a probability of 50% to 55% that ENSO-neutral conditions will continue through the Northern Hemisphere winter 2019-20. 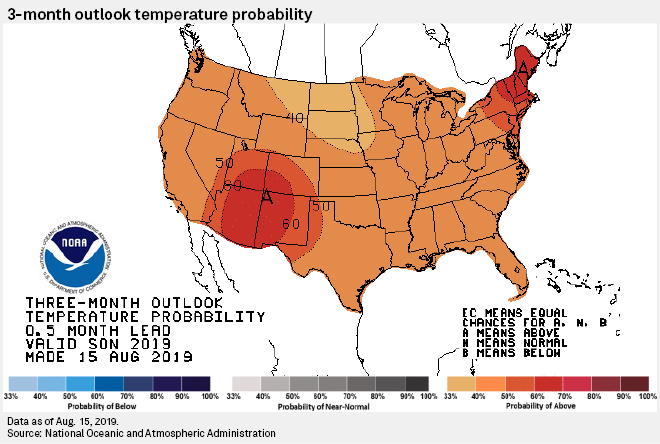 A CDD is created for each day that the mean daily temperature exceeds 65 degrees Fahrenheit, and a heating degree day similarly reflects below-65-degree-F daily temperatures. Data included in this report are based on population-weighted data collected by the National Oceanic and Atmospheric Administration, or NOAA, an organization of the U.S. Department of Commerce.