Over the past two years, smartwatches have become the primary growth driver in the wearable technology market. Buoyed by high-profile smartwatch model releases in 2018, most notably the Apple Inc.'s Apple Watch Series 4, estimated global unit shipments of smartwatches surpassed 46 million in 2018, an increase of 15% over 2017. 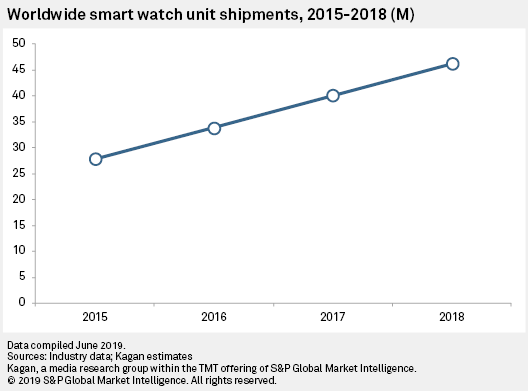 Along with traditional functionalities, such as notifications and alerts, the integration of fitness and wellness capabilities into new smartwatch models is attracting new buyers who previously would have purchased a lower-priced fitness tracker product.

Kagan defines a smartwatch as a wearable device that resembles and functions as a wristwatch. In addition to telling time, most smartwatches are Bluetooth and/or Wi-Fi-capable, which enables the watch to extend the capabilities of a wearer's smartphone to the watch. This allows the wearer to use the watch's interface to initiate and answer phone calls from the mobile phone, read or dictate email and text messages, listen to music and perform other tasks often handled by a smartphone.

An increasing number of smartwatches now offer a direct wireless connection, cutting out the need to be paired with a smartphone. Most of these products come with a built-in SIM card, providing a direct LTE connection with a service provider's cellular network. While the price of these products, the most prominent being the Apple Watch Series 4, are higher than non-LTE connected products, in several markets they have become quite popular.

The market drivers consist of:

Some key challenges influencing the smartwatch market include:

Apple again dominated the smartwatch market in 2018. We estimate that there were over 21 million Apple Watch shipments last year, as the Apple Watch accounted for 46% of all worldwide smartwatch shipments. While the Apple Series 4 smartwatch, introduced in September 2018, has been very successful, the lower-priced Series 3 still sells well. As of mid-2019, the Series 4 is priced at $349, with the Series 3 selling for $199.

Among other vendors, Samsung Electronics Co. Ltd. with its Galaxy Watch and Fitbit Inc. both enjoyed modest unit shipment growth in 2018, while demand for Garmin Ltd. smartwatches remained steady year over year. 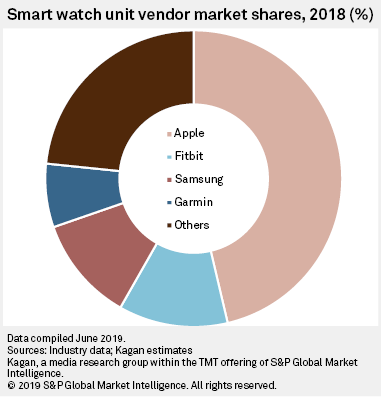 The "others" vendor category of smartwatch vendors accounted for approximately 23% of total unit shipments in 2018. Many of these vendors are based in Asia and sell moderately priced smartwatches for both children and adults. These vendors include companies such as Huami Corp.'s Amazfit, Fossil Group Inc., Huawei Technologies Co. Ltd., Xiaomi Corp., Guangdong BBK Electronics Industry Co. Ltd.'s iMoo and LG Electronics Inc.

Global demand for smartwatches continued to increase in 2018, driven primarily by the introduction of the Apple Watch Series 4. A secondary driver for smartwatch growth is the continuing integration of health and fitness capabilities into the products. This enhancement has proven to be an enticement for consumers who previously would have purchased a more basic fitness tracker product.

Similar to other wearable technology products, the majority of smartwatches are primarily sold in just two regional markets: North America and Asia. 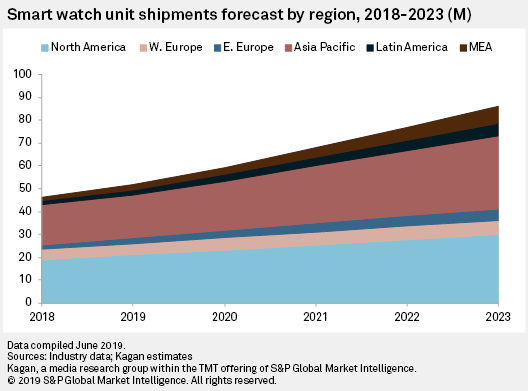 Demand for smart watches has been on an upward trajectory for several years and we expect that growth trend to continue in the future. Throughout the remainder of our forecast period, we are projecting unit shipments to exceed 51 million in 2019, and grow to over 85 million by 2023.

In the U.S., smart watch unit shipments reached 17 million in 2018, again fueled primarily by the Apple Watch. We expect demand to increase again in 2019 as product functionality and battery life improves, attracting new buyers to the market. 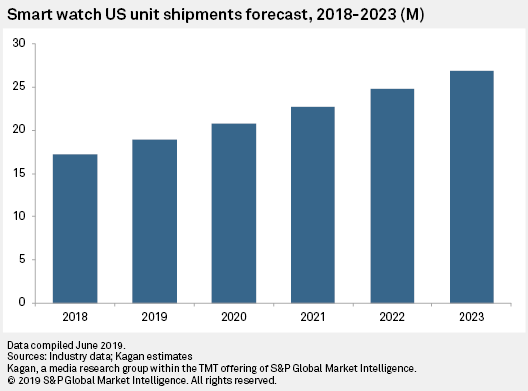 We are forecasting unit shipments to reach about 19 million in 2019, followed by sustained growth in 2020 resulting in over 20 million unit shipments.

Revenues for smart watches were an estimated $10.97 billion in 2018, up from $9.90 billion in 2017. Revenues are projected to surpass $12 billion in 2019 as the products penetrate new geographic markets and as pricing remains firm, especially with the inclusion of enhanced fitness and wellness capabilities in a growing number of models. By 2023, we are forecasting global revenues to reach $17.25 billion.