War and (Nearly) Peace - 28 Events in the U.S.-China Trade Conflict

U.S. and China government representatives held "productive meetings" in the tenth round of trade negotiations according to U.S. Treasury Secretary Steve Mnuchin. The next round of talks are scheduled for May 8 and may be able to land a wide-ranging policy-and-purchasing agreement to settle trade conflict that goes back to the U.S. section 301 investigation of Aug. 21, 2017. The process so far can be broken down into four main stages and 28 steps, drawn from over 400 Panjiva research reports. The rhetoric building stage through Mar. 2018 included China applying tariffs on $12.2 billion of U.S. soybeans in response to steel duties. The opening salvo of section 301 tariffs by the U.S. and China's retaliation through Jun. 2018 settled on 25% tariffs on $100 billion of bilateral trade. Not all sectors - such as $2.6 billion of U.S. construction equipment imports - have seen a drop in shipments as a result. The widening of coverage to $360 billion of bilateral trade at lower rates through Nov. 2018 has led to over 13,000 requests from U.S. companies for leniency from tariffs, only one-fifth of which have been successful. From Dec. 2018 to now the ceasefire prevented further tariff increase and has allowed detailed talks to continue. Evidence from February suggests the U.S. has "won" the tariff war in terms of net exports, though preliminary figures for March indicate China may have regained an edge more recently.

The latest round of trade negotiations in Beijing between the U.S. and China have included "productive meetings" according to U.S. Treasury Secretary Steve Mnuchin, Reuters reports. In a quest to complete talks in time for a summit between President Donald Trump and President Xi Jinping - which has yet to be scheduled formally but may be in late May - the talks may have narrowed their focus to exclude enforceable measures on intellectual property theft by private firms according to the Financial Times.

While there is another round of talks scheduled for May 8 there are no guarantees that a conclusion can be successfully reached, indeed President Trump's Chief of Staff, Mick Mulvaney, has stated that while there will be a conclusion "one way or the other in the next couple of weeks" there's no "deal fever", Bloomberg reports.

It's difficult to understate the complexity of the issues being addressed, particularly against the backdrop of the process followed so far. This report brings together the 27 previous events in the trade war four broad time-frames, drawn from 420 Panjiva research reports published over the past two years. The dates below indicate the publishing date of the related report.

Aug. 21 2017 - The U.S. Trade Representative launched a section 301 trade review focusing on China's intellectual property and technology transfer policies at the behest of President Trump, whose Executive Order also focused on the width of the U.S. trade deficit versus China.

Nov. 9 2017 - A summit meeting between President Trump and President Xi included the signing of $253 billion worth of commercial deals - including investments and purchases - spread over several years. That provides the first signs that commercial deals as much as policy deals matter to the Trump administration.

Dec. 19 2017 - The Trump administration's National Security Strategy marks China as a  "strategic competitor", moving the section 301 process outside realm of trade policy and into broader geopolitical rivalry between the two countries. Arguably that undermines the likelihood of an eventual conclusion, rather than just cessation, of hostilities.

Jan. 17 2018 - In a contentious phone call President Trump refers to the trade deficit as being "not sustainable" while President Xi calls for comprehensive talks "at proper time".

Mar. 9 2018 - The implementation of national security-related tariffs on imports of steel and aluminum by the U.S. under the section 232 process led China to apply retaliatory duties on soybeans that were worth $12.2 billion in 2017, Panjiva data shows. 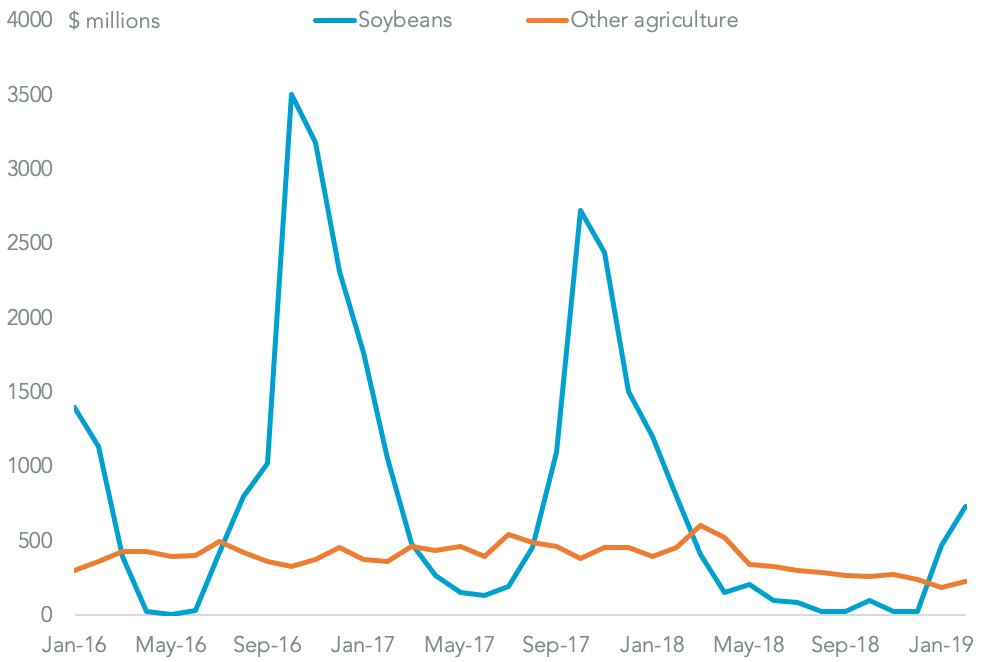 Mar. 13 2018 - The U.S. government called on the Chinese government to find $100 billion of purchases to cut the U.S. trade deficit. That indicated the potential to use a wide-ranging purchase agreement by Chinese state-owned enterprises as an off-ramp from tariffs.

Mar. 26 2018 - The USTR announced the result of its section 301 review with recommendations that tariffs of 25% be applied to $50 billion of Chinese exports in two phases in July and August. The formal list of products covering 1,333 items focused on industrial supply chains was announced on Apr. 4.

Apr. 5 2018 - China responded with its own list of $50 billion worth of products for retaliatory duties at a 25% rate, focused on 106 tariff categories with a focus on commodities, aerospace and autos.

Apr. 6 2018 - President Trump ordered the USTR to consider which products to apply counter-retaliatory duties to, initially covering $100 billion and then raised to $200 billion across a range of non-consumer products.

May 7 2018 - A summit meeting including Secretary Mnuchin, Ambassador Lighthizer, and Vice Premier Liu He included U.S. demands for a $200 billion reduction in the trade deficit alongside Chinese calls for a relaxation of rules on exports of high-tech products to China from the U.S.

May 18 2018 - Following the summit the Chinese investigation of sorghum dumping was cancelled, though they continue to be covered by the initial list of $50 billion of products under section 301 retaliation.

Jun. 4 2018 - Meetings between Vice Premier Liu and Commerce Secretary Wilbur Ross reveal plans for multi-year contracts for purchases in agriculture as part of a long-term settlement in the trade war.

Jun. 15 2018 - President Trump approved the $50 billion tariff package which included different products from the original list, including construction equipment. In hindsight, as at February 28, imports of the products - worth $2.58 billion in 2018 - had actually gone up rather than down, suggesting the tariffs weren't high enough to change buyers' behaviors. 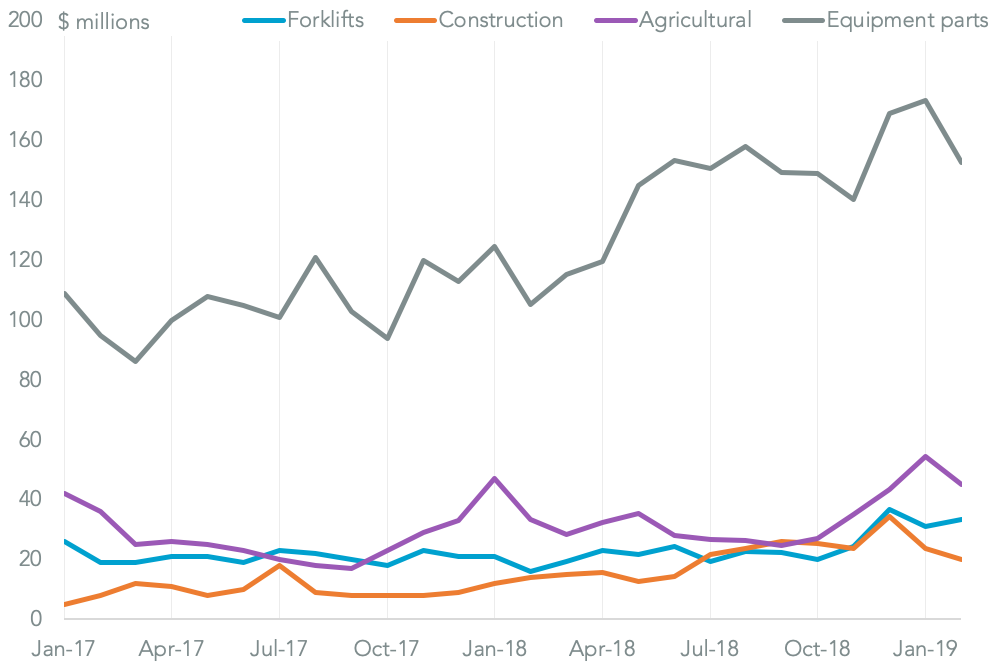 Aug. 22 2018 - The U.S. and China hold the first round of talks to resolve the trade conflict, though little is declared between an agreement to have comprehensive discussions regarding both countries trade policies.

Nov. 2 2018 - The procedure for companies to request hardship-related exemptions from the initial 25% duty round from July yields 8,241 applications. That eventually rises to 13,761 requests with 21.4% of decisions leading to exemption by Apr. 17 2019, Panjiva analysis shows.

ONLY A ONE-IN-FIVE CHANCE OF APPROVAL 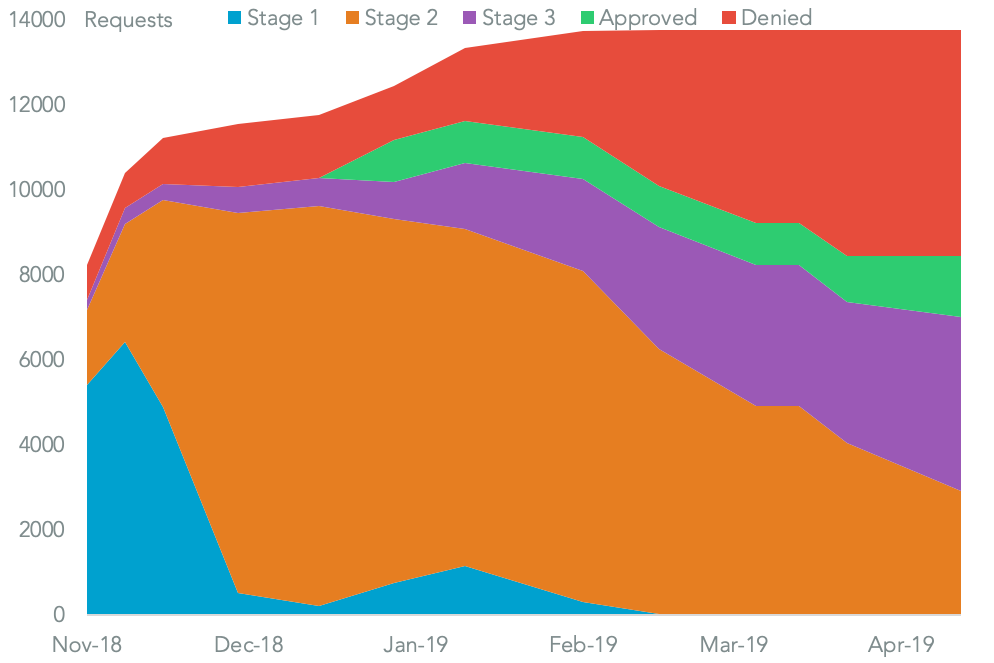 Chart segments applications to the USTR for exemption from section 301 duties by U.S. companies by stage of review.  Source: Panjiva

Dec. 3 2018 - President Xi and President Trump agreed a 90 day cessation of tariff increases while a new round of negotiations begin. China also commits to increased purchases of energy products including LNG and oil.

Jan. 10 2019 - The first round of talks confirm a wide range of economic policies will be covered, though the U.S. also remained focused on the trade deficit, announcing China will "purchase a substantial amount of agricultural, energy and manufactured goods" and that any agreement will include "ongoing verification".

Mar. 4 2019 - President Trump called directly for China to "immediately remove" all its tariffs on U.S. agricultural exports shortly before a summit meeting with President Xi, perhaps indicating the pressure from farmers on the Trump administration.

Apr. 1 2019 - Talks continued beyond the 90 day deadline set in January. The Chinese government suspended duties on imports of U.S. autos, possibly as a gesture of goodwill.

Apr. 18 2019 - Two rounds of negotiations were scheduled for Apr. 29 and May 8 with a view to reaching a conclusion in negotiations. Panjiva's data shows that in February the tariff war had cut China's net exports to the U.S. by $3.61 billion in the month, with U.S. imports from China down 26.9%. Yet, official data for March from China - likely the last before the May 8 negotiations - suggests much of that position has already been reversed. 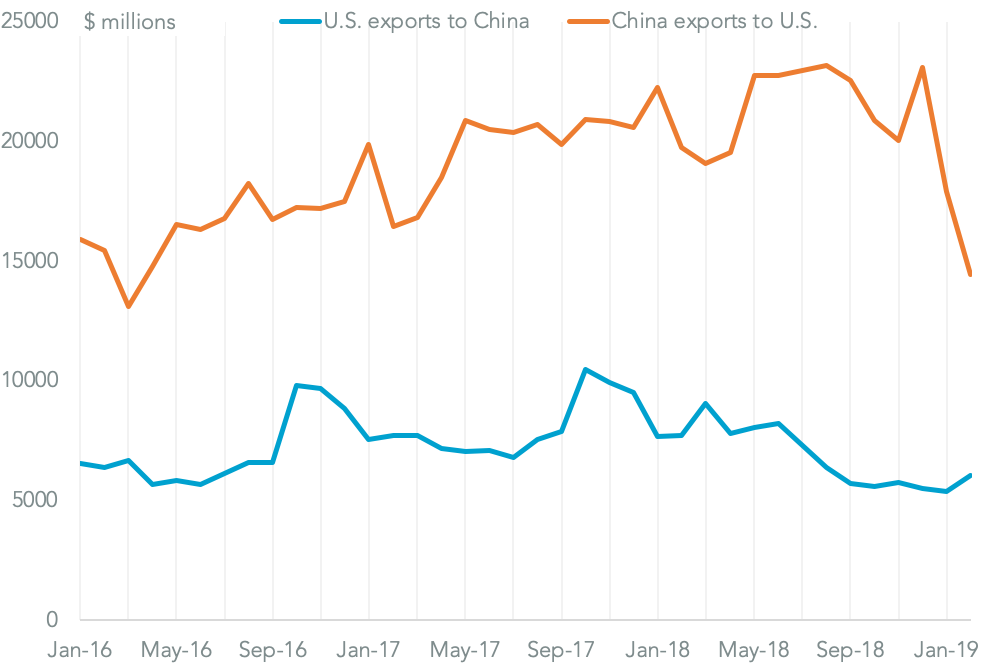 Chart segments bilateral trade in products targeted for section 301 duties by the U.S. and related retaliation by China.  Source: Panjiva