Walmart Inc.'s August 15 announcement that it had struck a deal with Paramount Globall to include Paramount+ Essentials (with ads) for free to Walmart+ subscribers could help Walmart+ grow its footprint as it operates in the very long shadow of Amazon.com Inc.'s Prime service. S&P Global's U.S. Consumer Insights survey of 2,519 online adults conducted in March 2022 revealed just 23% of total respondents reporting that they subscribed to Walmart+, well below the 64% that said they subscribed to Prime.

* Partnering with streaming video service operators such as Paramount+ could free Walmart from the heavy expense involved in building out its own in-house video offering to supplement Walmart+. About one in five Walmart+ subscribers reported using Paramount+, relatively low overlap compared to other video services used.

* Walmart+ subscriber demographics reveal a young, affluent user base that is likely to live in households with children and use a wide range of streaming video and music services. Offering free access to Paramount+ and six months of Spotify Technology SA's Spotify Premium service may help retain current Walmart+ subscribers and broaden its appeal among non-subscribers.

* 86% of Walmart+ members also subscribe to Prime. While free access to Paramount+ could broaden the appeal of Walmart+, the service is unlikely to win subscribers away from Prime. Walmart+ may not be looking to compete head-to-head with Prime, instead aiming to increase the value proposition of its offering to grow alongside the larger, more established Prime service.

Prime has a long head start in the US market, launched in February 2005 versus a September 2020 debut for Walmart+. Prime and Walmart+ differ in monthly pricing — $14.99/month and $12.95/month, respectively — and annual discounts, with Prime's annual plan priced at $139/year and Walmart+ at $98/year. The primary perk for both membership services is free shipping on hundreds of thousands of items, with Prime members also getting access to Prime Video, Amazon Music Prime and other features while Walmart+ members receive additional benefits including discounts on gas and six months of Spotify Premium for free.

Survey respondents were roughly three times more likely to subscribe to Prime than Walmart+, with 64% subscribing to Prime compared to 23% for Walmart+. Overlap between the two services was also decidedly one-sided, with 86% of Walmart+ subscribers reporting that they were also Prime members versus just 30% of Prime subscribers belonging to the Walmart+ program. 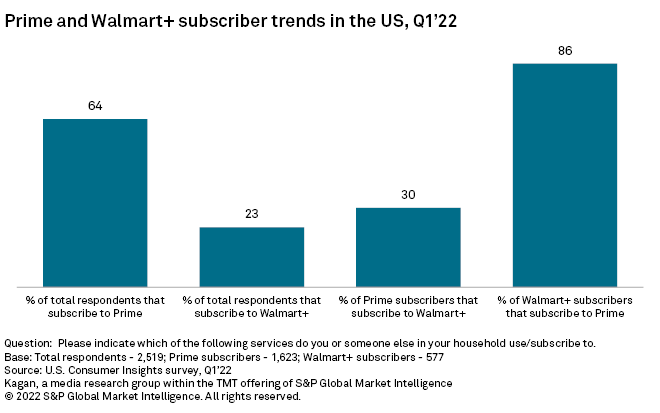 The Walmart brand may not be synonymous with young and affluent but early adopters of Walmart+ were noticeably younger than both total respondents and Prime subscribers and they were much more likely to live in households with total income of $100,000 or more. Walmart+ users were slightly more ethnically diverse and nearly half reported living in urban metro areas, with 60% living in households with children. 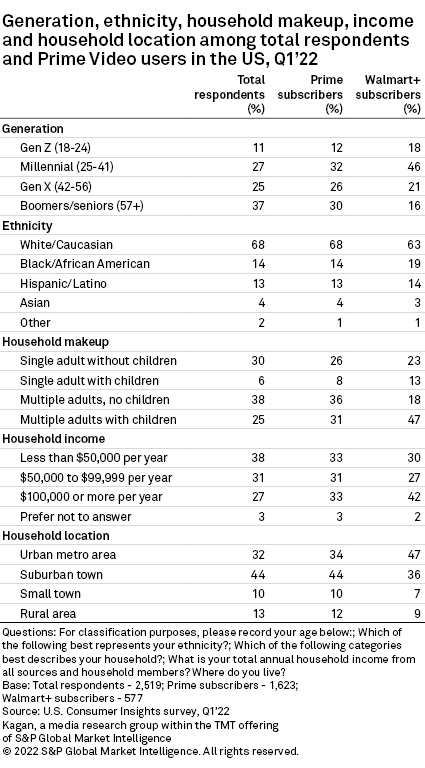 Walmart's pact with Paramount is one of many similar tie-ups that has seen a streaming service included at no additional cost to subscribers of wireless phone plans, streaming music services or as part of a membership perk for services such as Prime and Walmart+. Respondents that subscribed to either Prime or Walmart+ tended to be avid consumers of major U.S. streaming video services in general, from Netflix Inc. to Warner Bros. Discovery Inc.'s Discovery+. 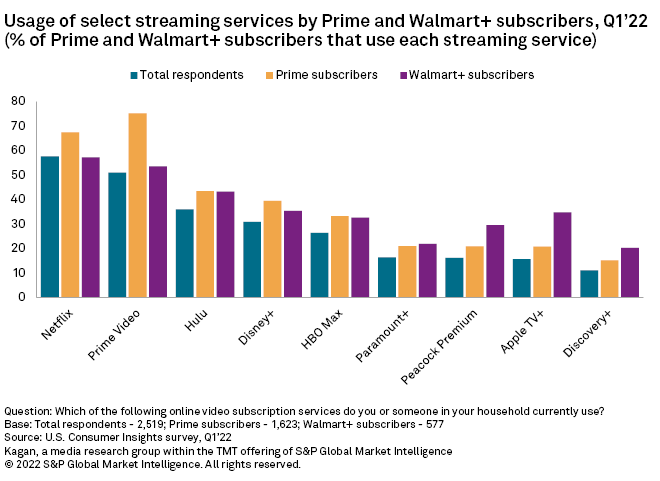 Walmart added six months of Spotify Premium for Walmart+ members in March 2022, the same month that Walmart announced that its 1.6 million full- and part time associates in the U.S. would begin receiving complimentary access to Walmart+ as a job perk. Walmart+ subscribers were more likely than total respondents and Prime members to use all of the major streaming music services surveyed for, with the most noticeable difference in usage of Apple Inc.'s Apple Music service. 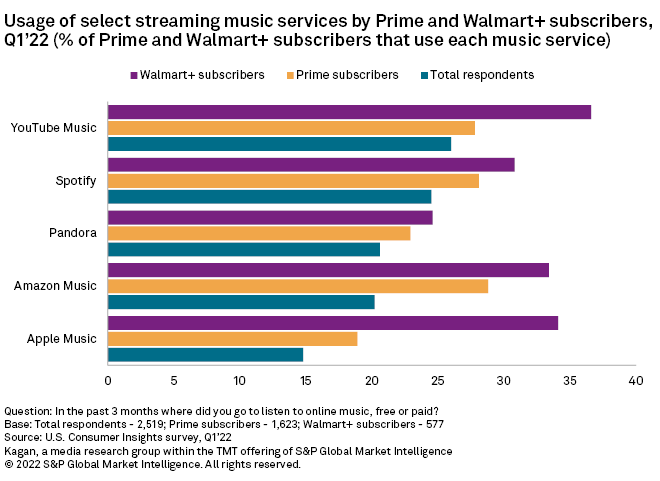 As addicted as some American consumers have become to the convenience offered by programs such as Prime and Walmart+, broader shopping behaviors for online and retail purchases look surprisingly similar across the board. Prime and Walmart+ subscribers were slightly less likely than total respondents to say they primarily/mostly purchase items in retail stores but all three segments were close to the 50% mark. About one-third of Prime and Walmart+ members said they primarily/mostly purchase items online, a touch higher than the 27% of total respondents that answered the same.

Data presented in this article was collected from the U.S. Consumer Insights survey conducted in March 2022. The survey totaled 2,519 internet adults with a margin of error of +/- 1.9 percentage points at the 95% confidence level. Percentages are rounded to the nearest whole number. Gen Z adults are ages 18-24, millennials are aqes 25-41, Gen X are ages 42-56 and baby boomers/seniors are adults aged 57+.