Asia-Pacific fintech firms scooped up $3.14 billion across 113 deals in the fourth quarter, which marks the highest quarterly funding activity for the year.

Asia-Pacific fintech firms scooped up $3.14 billion across 113 deals in the fourth quarter, which marks the highest quarterly funding activity for the year. While this lifted the total fintech investments to $6.8 billion in 2020, the aggregate deal value is still 33% down from 2019.

Excluding the outsized rounds in 2019 that were closed by Jingdong Digits Technology Holding Co. Ltd., which does business as JD Technology, and One97 Communications Ltd., which operates as Paytm, the decline in Asia-Pacific fintech investments was more muted at 6%. Deal volume in 2020 fell 18% to 427 transactions. 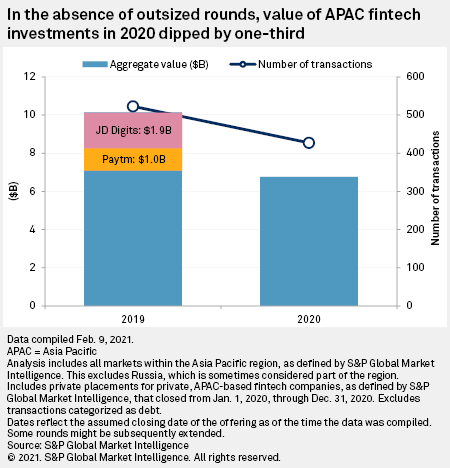 While China was among the few large economies to have expanded in 2020, it saw the largest dip in deal volume, closing just 70 transactions in 2020, compared to 129 deals in the previous year. In 2020, China accounted for only 16% of Asia-Pacific fintech funding volume and 19% of the aggregate transaction value, down from 25% and 31%, respectively, in 2019.

On the other hand, Southeast Asian fintechs captured a larger share of the pie this year, netting 28% of Asia-Pacific deal activity and 17% of the region's funding value, up 2% and 3%, respectively, from the previous year. Southeast Asia's funding figure, however, is understated as it does not include capital raised by Grab Holdings Inc. and PT Aplikasi Karya Anak Bangsa, which does business as Gojek. The two popular ride-hailing apps have large fintech businesses in the region but were excluded from our funding roundup as capital allocated to their financial services businesses has not been disclosed. 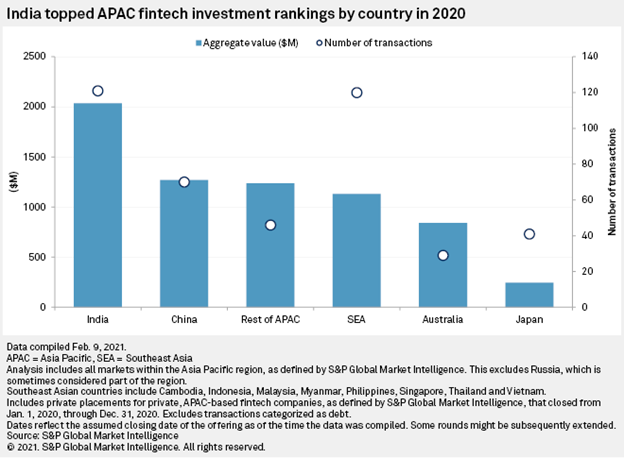 In each of the four quarters in 2020, payment companies drew in the most venture capital among the six fintech segments tracked by S&P Global Market Intelligence. Notably, investors continue to reward the rebundling of financial services, which has been an ongoing theme in the fintech space for a while now.

Large mobile payment companies like PhonePe, Viva Republica Co Ltd. which operates Toss, and Voyager Innovations Inc., which owns Paymaya, closed mega funding rounds of more than $100 million last year, accounting for 38% of total investments in the payments sector. All three payment companies have already expanded into other financial verticals, with Paymaya and Toss planning to use the proceeds to deepen their presence in financial services.

Toss has secured a preliminary banking license and will soon formally enter the banking sector. We expect to see large e-wallet operators in Southeast Asia pursuing a similar path as central banks in the region remain keen on issuing banking licenses to technology firms.

In a similar vein, venture capitalists were also upbeat on digital banks, which propelled investments in the banking technology sector to grow 236% to $1.6 billion in 2020. Banking technology was the only fintech category that saw growth in funding last year.

South Korea's KakaoBank of Korea Corp. saw the largest fundraise among banking technology firms, gathering $661 million in a pre-IPO round from a mix of existing shareholders and new investors — Anchor Equity Partners Korea Ltd. and TPG Capital LP. Despite a challenging environment, the app-based bank backed by Kakao Corp. reported significant growth in earnings, registering net income of 85.9 billion won during the first three quarters of 2020, up from 15.4 billion won in the year-ago period. During a Nov. 5 earnings call, Kakao said that noninterest income will drive the bank's bottom line as it ramps up its nonlending businesses.

KakaoBank has been actively expanding beyond lending by partnering with other financial institutions. It has forged partnerships with brokerages including Korea Investment & Securities Co. Ltd., NH Investment & Securities Co. Ltd. and KB Securities Co. Ltd.; and is also collaborating with Shinhan Bank Co. Ltd., KB Kookmin Bank, Samsung Card Co. Ltd. and Citibank Korea Inc. to co-issue credit cards. The digital bank has over 13 million active users and plans to use the proceeds to shore up its capital adequacy ratio, which stood at 13.45% as of September 2020.

The Australian digital bank saw losses inflating to A$50.8 million for the period ended June 2020 from A$28 million in the year-ago period, driven by an increase in provision for credit losses in anticipation of pandemic-induced defaults. At a time when most banks in Australia appear wary of taking on credit exposure, Judo Bank is growing its loan book. Between Jan. 31, 2020, and Dec. 31, 2020, Judo Bank's small business lending balance grew 135% to A$2.39 billion. In comparison, the banking industry’s SME loan book had contracted by 1% over the same period, according to data from the Australian Prudential Regulation Authority.

While some digital banks thrive, others falter. Australia's Xinja Bank relinquished its banking license in December, citing a challenging fundraising environment. Xinja Bank had announced a $433 million investment from World Investments in March 2020, but the Dubai-based company told The Sydney Morning Herald that no deal had been signed yet for that amount, the Australian news outlet reported in January 2021. 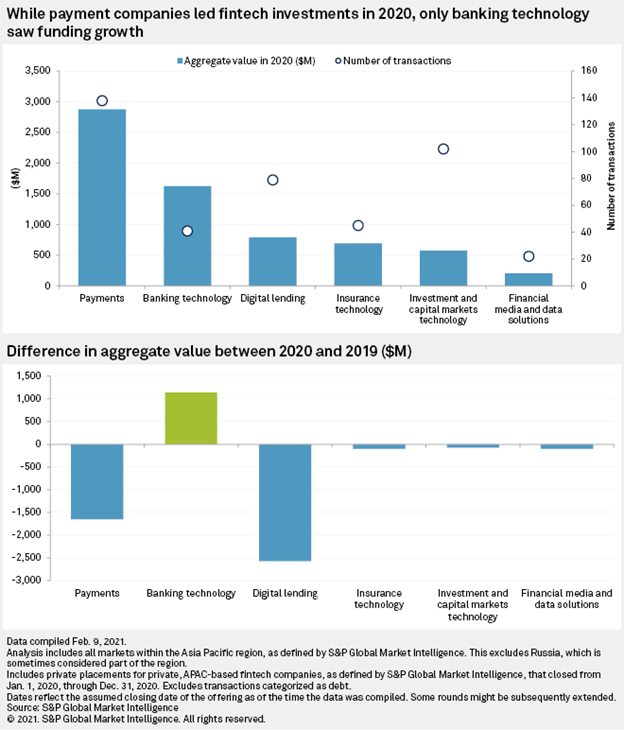 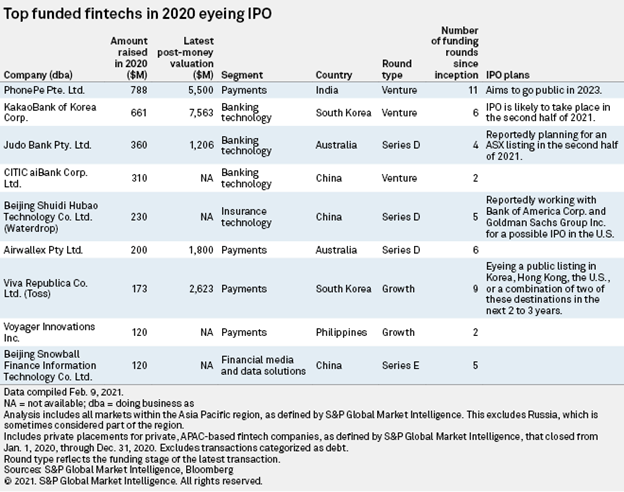 An IPO is on the cards for several top-funded fintechs in 2020. These firms have achieved the coveted unicorn status with valuations above $1 billion and most have completed at least five capital raises since their inception. KakaoBank and Judo Bank are seeking to launch their IPOs as early as 2021, while the others are eyeing a listing over the next few years.

Despite the uncertainties brought about by COVID-19, investors were still on the prowl for new fintech deals and were open to betting on less mature fintechs. Across 33 large funding rounds with a deal size of $50 million and above, 19 saw participation from new investors, of which eight are series B round transactions.

While transactions closed in the first half of 2020 may have been negotiated pre-pandemic, 10 deals involving new investors concluded in the second half of the year. Further, a surge in funding levels in the last quarter of 2020 shows the promise of an improved funding environment ahead. Successful IPO launches could lead investors to write more checks to young companies. That said, China's crackdown on large technology firms, which have historically been prominent investors in Asia-Pacific-based fintechs, may be a drag on fintech investments. 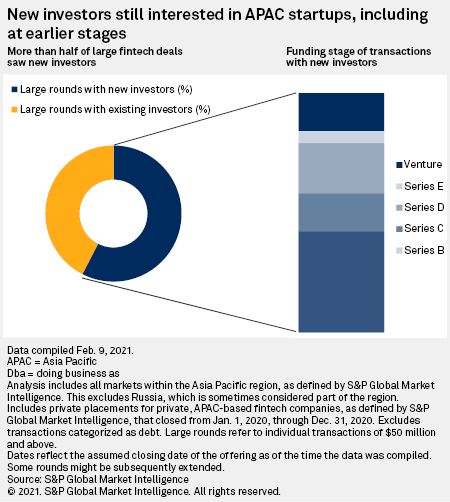 Read the full report on the Market Intelligence platform