VC Capital Flooding Into China, A Potential Harbinger For Other Countries


VC Capital Flooding Into China, A Potential Harbinger For Other Countries

A March rebound in funding for private Chinese companies seems like good and bad news for other countries.

China saw a staggering 150% month-over-month increase in the dollar amount of private placement transactions in March. On the one hand, this bodes well for a quick recovery elsewhere once the catastrophic impact of the COVID-19 pandemic can be contained. But on the other hand, private funding to Chinese companies fell dramatically in January and February, meaning that activity in other large markets that were subsequently impacted by the virus, such as the U.S. and the U.K., will likely decline before it recovers.

Private company funding fell 15% worldwide in March, but the data tends to vary strongly from month to month in total dollar amount, since one large raise from a so-called unicorn could heavily skew the totals. Removing outliers using an interquartile range analysis showed a much more modest drop — about 5% — in March. However, it also showed a gradual decline in global venture capital funding since December 2019. April was also on track to be lower, based on data as of April 20 after removing outliers. 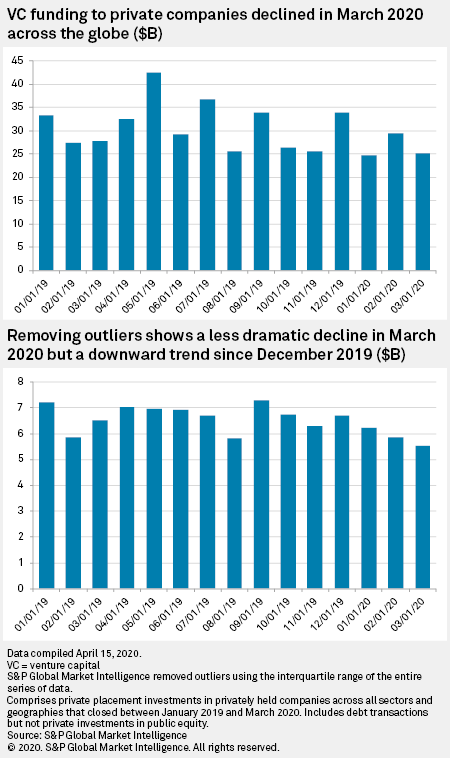 The raw data, without removing outliers, can also provide some insights on investor activity amid the pandemic. While the information technology sector, which includes a variety of tech companies, still attracted the most dollars in March, funding declined 21% during the month. Financials and industrials saw big drops as well, whereas capital flows into private healthcare companies increased 73% during the month. 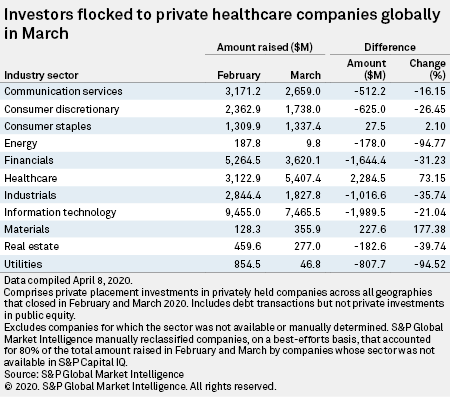 It is not immediately clear how much of the increased interest in healthcare is directly related to fighting the pandemic. But the third-largest healthcare raise in late March was from Cambridge, Mass.-based ElevateBio LLC, which said March 23 that a portfolio company Allovir Inc. was actively working on the discovery and development of therapies to combat SARS-CoV-2, the virus that causes COVID-19. ElevateBio closed a $170 million round March 30.

The uptick in venture capital funding for private Chinese companies offers not only reason for optimism but also a potential road map for recovery in other countries. Both the dollar amount of private placements and the number of transactions more than doubled month over month in March as other typically large VC markets — the U.S., India and the U.K. — declined. 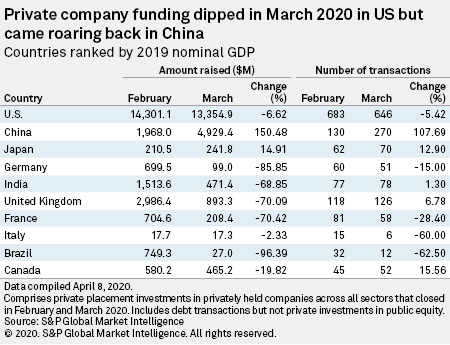 The consumer discretionary sector saw a big uptick in investor flows, owing predominantly to a $1 billion raise from Beijing Zhenguanyu Science and Technology Co., Ltd., which does business as Yuanfudao, in late March. The company offers virtual classes, live tutoring and apps for homework support for students in the K-12 age group and seems like a logical beneficiary of the increased distance learning resulting from COVID-19. 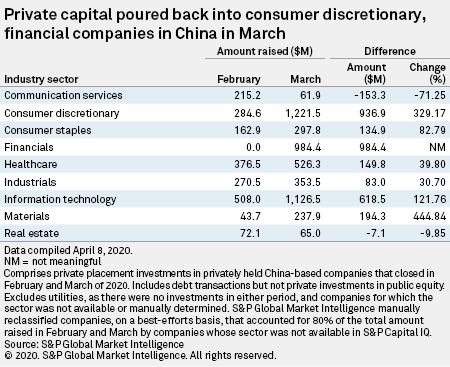 The IT sector is an important one when it comes to private placements, as it is typically the sector that receives the most funding in terms of dollar amount. Despite the aforementioned 21% drop in March, funding for the IT sector seems to be holding up fairly well. Based on commentary from conference calls and individual interviews with VC investors, the general sentiment seems to be that investors are still willing to fund companies during the crisis, but they want to see thorough plans for surviving the downturn, including cost containment strategies, potential market pivots and a deep understanding of the unit economics of their business.

On the positive side for startups, there is still an abundance of dry powder at VC firms. As noted in the first quarter 2020 Venture Monitor, a collaboration between data provider PitchBook and The National Venture Capital Association, U.S. venture investors had $121 billion ready to deploy as of the middle of 2019. Among other findings, the report said that venture investors are becoming more conservative, primarily focused on funding their existing portfolio companies, and that many of the recently closed transactions were already in the pipeline.

The two largest IT rounds in March did indeed come early in the month. Waymo LLC, a Silicon Valley developer of autonomous vehicle technology, closed a $2.25 billion round March 2, which accounted for 30% of the $7.47 billion in capital that flowed to IT companies globally in March. Waymo is owned by Alphabet Inc. and began as the Google self-driving car project in 2009. Alphabet continues to fund the company, but the March private placement was the first time Waymo took external capital. In addition to Alphabet, the round included several big-name venture capital funds, as well as publicly traded auto retailer AutoNation Inc.

The other was from Chime Financial Inc., a San Francisco-based fintech company, and, in keeping with the Venture Monitor's observation, it was a long-running raise. The challenger bank closed a $700 million round March 5, up from the initial $500 million it sought. The fresh capital was, in retrospect, very well-timed, as it will provide much-needed runway. Given Chime's business model as a digital alternative to traditional banking services, though, it might actually benefit from consumers becoming more acclimated to online banking.

That said, some U.S. IT companies were able to get relatively large amounts of funding in later weeks. HashiCorp Inc., which makes cloud infrastructure automation software, secured $175 million in financing March 16 and User Testing Inc., which offers a platform to help companies improve their customers' user experience, scored $100 million in funding March 19.

Based on China's trajectory, the next two months are likely to be more challenging for companies looking to raise capital in the U.S. and Europe, but not impossible. After removing outliers from the data, funding levels declined significantly in January and February, before recovering sharply in March. In the countries that started to feel economic impact of COVID-19 later, capital will likely be readily available to the well-known startups with firmly established market positions and positive cash flow characteristics, particularly those that are relatively insulated from the economic impact or that can successfully pivot their operations to new business opportunities. Then, perhaps within a few months, private capital should come rushing back in.