The S&P 500 Utilities index increased 2.0% in October, underperforming the S&P 500 and most other industry subsectors during the month as utility management teams continue to monitor the potential impacts of rising interest rates and inflation on capital expenditure and financing plans.

On Nov. 2, the Federal Reserve unanimously approved an increase to its benchmark federal funds rate of 75 basis points and indicated another 75-basis-point hike may be needed in December if inflation does not subside.

After moving into negative territory for the year in September, utility stocks recovered some losses in October. But ultimately, utility stocks underperformed the S&P 500's 8.0% monthly gain, fueled by investor anticipation of a Fed policy pivot to moderate or fully move away from rate hikes.

Energy and water utility stock valuations, as measured by forward price-to-earnings multiples, increased marginally in October, while the sector's stock price valuation premium to the S&P 500 declined to levels observed in March.

The S&P 500 was down 18.8% year-to-date through October. The Dow Jones Industrial Average and Nasdaq Composite indexes were down 9.9% and 29.8%, respectively. Real estate, consumer discretionary and communications services equities fared worse than utility stocks in November, while the energy and industrial sectors outperformed.

As measured by stock price to estimated 2024 EPS, the S&P 500's relative outperformance further narrowed its valuation discount to the S&P 500 Utilities group to approximately 8% from 19% at the end of September.

Authorized equity returns for water utilities through the first nine months of 2022 remained higher than 2021 for the group versus electric and gas peers, albeit based on a small sample set. Base rate proceedings for RRA-tracked water utilities across seven states were completed from January to September, with returns on equity ranging from 9.1% to 10.0%. 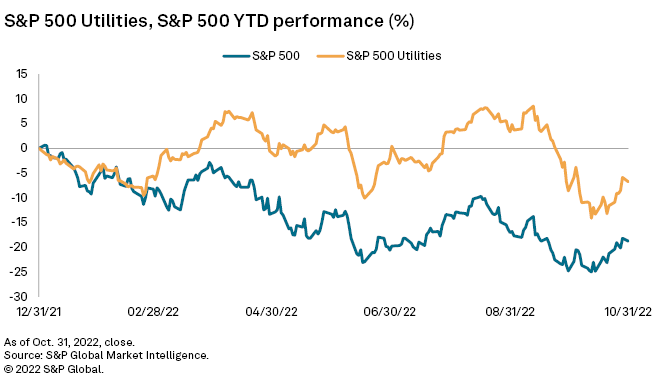 Shares of New Jersey Resources Corp. rose more than 15% in October. In August, management increased fiscal 2022 EPS guidance to a range of $2.40 to $2.50 from $2.30 to $2.40, driven by strong gas utility results on higher base rates and off-system sales, improved financial margin at the energy services segment, and higher wholesale electric revenues at its clean energy segment. S&P Capital IQ consensus estimates call for the company to report fiscal fourth-quarter EPS of 45 cents, versus 7 cents reported in the prior-year period.

Electric utility valuations and stock prices rose 4.6% on average in October, led by ALLETE Inc.'s 12.3% increase to its 2024 multiple to nearly 14x the 2023 S&P Capital IQ consensus EPS estimate. Current estimates call for a 32% increase in third-quarter EPS to 70 cents per share. The company is scheduled to report third-quarter results Nov. 9.

Eversource Energy's forward P/E and share price fell by approximately 2% in October. Late in the month, Eversource CEO Joseph Nolan urged U.S. President Joe Biden to use emergency authority to protect against a potential natural gas shortage in the region this winter, drawing attention to concerns about grid reliability and high gas prices in the fuel-constrained Northeast. ISO New England and the Federal Energy Regulatory Commission "have acknowledged for many months that New England will not have sufficient natural gas to meet power supply needs for the region in the event of a severe cold spell this winter," Nolan wrote in an Oct. 27 letter to the president. "This represents a serious public health and safety threat." 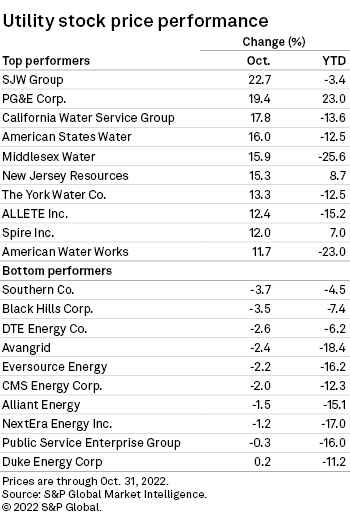 Multi-utility forward valuations and stock prices increased by approximately 2% on average in October, led by PG&E Corp. The PG&E Corp. shares reached a 52-week high of $15.60 on Oct. 27 when the company reported third-quarter EPS that surpassed S&P Capital IQ consensus expectations. The company is presently working to spin off its nonnuclear generation assets into another company, dubbed Pacific Generation LLC, and to sell a minority stake in that company as a means of financing utility spending.

PG&E's 2024 P/E multiple stands at a multi-utility sector low of 11.0x — up 18% since September — followed by MDU Resources Group Inc. at 12.2x. In a bid to "unlock significant value" of its business segments, MDU management recently announced a strategic review of its operations that could result in the separation of the company into two publicly traded entities: a construction materials company and a pure-play regulated energy delivery company.

The quadrant chart below shows how RRA's utility universe appears when comparing the P/E ratio and the estimated long-term earnings growth rate. A sizeable portion of electric, gas and multi-utility P/E multiples have remained in the upper-left quadrant in 2022, suggesting the companies could be relatively undervalued, considering their lower P/E values and higher long-term earnings growth potential. 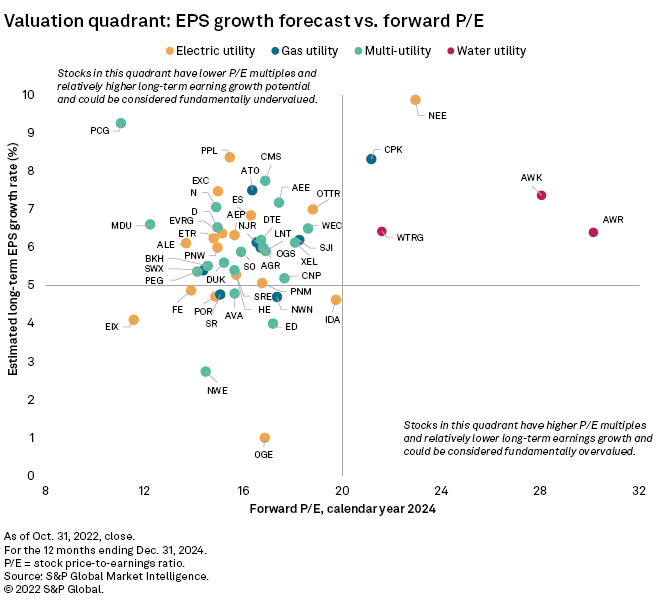 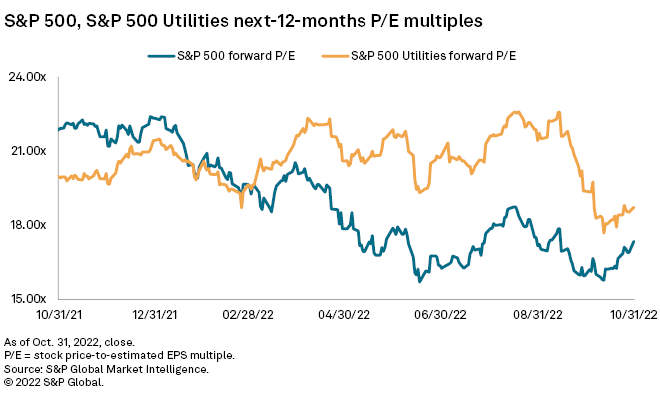