For the first quarter, the average financial quality of the energy and water utility parent companies covered by Regulatory Research Associates, a group within S&P Global Market Intelligence, showed modest signs of deterioration. We note that full-year 2019 financial results faced a difficult year-over-year comparison as extreme heat during the summer of 2018 bolstered results for many companies. Results of this parent company analysis were consistent with an earlier study of subsidiary financial performance for the first quarter of 2020.

As seen in the subsector analysis below, the water sector continued to post consistent quality results that generally exceeded those of the three energy groups. 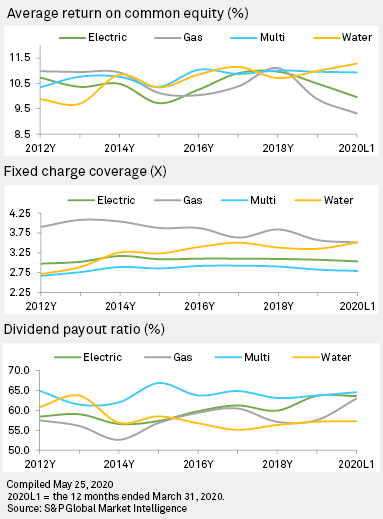 While financial implications of the coronavirus breakout are impossible to quantify at present, some dampening of near-term metrics is inevitable, as is expected when second-quarter results begin to be reported toward the end of July. Meanwhile, even prior to the pandemic issues, ancillary stresses had been at work in the industry for some companies, most especially those heavily committed financially to natural gas and coal, which have clearly fallen out of favor as the energy sector transitions away from fossil fuels and toward a lower greenhouse gas profile.

While such threats are real, all things considered, the comparatively essential nature of utility products and the economically regulated nature of their businesses suggest that the group will likely sustain less damage financially in the current recession than more cyclical sectors. From a regulated business perspective, challenges that have the potential to erode the impact on financial performance of investor-owned utilities will likely be addressed by state regulators. An array of cost recovery options exist that are intended to address rate treatment and thus soften the potential negative implications on companies.

By way of a refresher, utility earned returns on equity held up well during the last economic downturn. For the Financial Focus coverage universe, the average ROE only declined by 69 basis point in 2009 compared to 2008. Specifically, for 2009, the average utility ROE was 10.61% compared to 11.30% in 2008. Arguably, 2009 represented the depths of the last economic downturn with real GDP declining by 2.5%.

The cash flow coverage of the dividend has been steadily declining from a high of 4.49x in 2014. In the first quarter of 2020, it slipped further to 3.44x from 3.57x in 2019. This trend suggests that the group's rate of dividend growth in recent years may be slightly aggressive relative to overall financial metrics. Meanwhile, that perspective is also evident in an analysis of dividend payout ratios. The average payout at the end of the first quarter has elevated to 62.9% and has been increasing on a fairly consistent basis in recent years from the low of 57.4% in 2014. Based on current S&P Global Market Intelligence consensus estimates, EPS growth over the next three years is forecast to continue at a solid 4.6% average pace for all four groups: electric, gas, multi-utility and water. Earnings expansion is to be fueled by continued strong levels of new infrastructure investment in regulated utility plant, increased scrutiny of expense levels, heightened attention to productivity and customer growth, albeit at a reduced level over the near term depending on the magnitude and duration of the economic downturn. While solid fundamentals should continue for the industry across all the subsectors, recent coronavirus issues clearly will alter the outlook at least for the near term. EPS expectations for 2020 look for growth of 2.7%, though variations among the different utility groups are wide.

So far, few companies in our coverage universe have altered guidance for 2020 EPS or their longer-term profit growth goals. The coronavirus outbreak presents challenges for utilities on several fronts, including reductions in usage and revenues, higher anticipated occurrence of bad-debt/uncollectibles and increased operating costs associated with enhanced safety measures. With the broader economic effects of the coronavirus pandemic just beginning in late March, most utilities' first-quarter results did not reflect significant pandemic-related impacts; adjusted earnings for the companies in the energy and water utility universe were up nearly 3% year over year. Management teams expressed varying levels of uncertainty regarding the remainder of 2020. Despite many companies reporting that commercial and industrial sales fell in April, most management teams affirmed existing earnings guidance ranges.

Robust levels of base rate case activity and other forms of rate recognition associated with the resurgence in utility capital spending have been the driving force behind increased profits in the sector. While cutbacks in capital spending levels may be forthcoming, utility infrastructure replacement and new investments will ultimately continue at healthy levels once the dust settles from the current historic pandemic and associated sharp economic downturn. Financials should stabilize over time, while historically low interest rates will aid in the process.

The following discussion focuses on elements of the five measures examined in this report, with the corresponding tables providing detail. Financial ratio definitions and clarifications are provided in Appendix A of the tables.

The 25 electric utilities in this analysis generally aligned more closely with the multi-segment group than the gas or water segments, which generally trended stronger overall. The electric dividend payout ratio for the 12-months-ended March 31 was a lofty 63.6%, up from 60% at the end of 2018, with the recent jump attributable to higher payouts for Avangrid, Duke Energy and Southern Co. Cash flow coverage of the dividend for the electric group averaged 3.48x, continuing a general trend of weakness that has been in place for the past several years. Fixed charge coverage at the end of the first quarter averaged 3.03x, fairly close to the average in recent years.

The 14 multi-utilities generally followed the trends of the electric group. The average payout ratio for the group for the 12-months-ended March 31 was 64.6%, up slightly from the 2019 average of 63.7%. Both years are inflated by Dominion Energy's 86.7% payout. Dividend coverage for the most recent period of 3.52x was slightly above that of the electric group, while fixed charge coverage of 2.79x was the worst among the four groups. The earned 10.93% ROE for the multi-sector for the 12-months-ended March 31 bested the energy group average owing to strong results at a handful of diversified companies, including CenterPoint Energy Inc., CMS Energy Corp., Dominion Energy, MDU Resources and Sempra Energy. Conversely, the 40.1% common equity ratio average for the multi-sector was the weakest among the group.

The nine gas utilities in this analysis tended to outpace the full group's fundamentals. Fixed charge coverage for the 12-months-ended March 31 of 3.51x, while down slightly, remained quite strong, especially in comparison with the other energy subgroups. The average payout ratio for gas companies of 63% for the 12-months-ended March 31 increased from recent levels, driven by higher payouts at Northwest Natural Holding and South Jersey Industries. Earned ROEs for the gas sector for the most recent period declined to 9.31%, from 9.88% in 2019 and 11.10% in 2018, due to weaker profits in 2019 at several of the gas utilities.

The water utilities generally performed better overall versus the three energy groups. Credit ratings for the water sector are generally higher, with S&P Global Ratings assigning company ratings of A- or higher. The average water utility ROE for the group for the 12-months-ended March 31 trended up to 11.28%, from 10.71% in 2018, due in large part to a meaningful expansion at American States Water driven by rate increases at its largest water utility and expansion of its nonregulated military contract operations business.

The water utility sector boasts the lowest dividend payout ratio across the four subsectors of 57.3% at the end of the first quarter, compared to the energy subgroup averages, which range from 63.0% to 64.6%. On April 29, the largest water utility, American Water, announced a 10% dividend increase. The group appears well positioned to continue its tradition of robust annual dividend increases. Return on average common equity across the water utility group of 45.5% declined slightly from 45.8% at 2019 year-end. Equity issuances are anticipated at Essential Utilities and California Water sometime in late 2020 or 2021.

Charlotte Cox and Heike Doerr contributed to this article.