May. 17 2018 — The following post was written by research groups within our Energy offering, including Regulatory Research Associates, or RRA. For further information about our analysis or the full report, please request a demo.

Forecast 2018 capital expenditures for the 52 electric and gas utilities in the RRA universe climbed to an all-time high of $131.1 billion, up from utilities’ prior forecast of $111.7 billion that was tallied last fall. If the latest forecast holds true, it would represent an almost 19% increase from the $110.2 billion of capital expenditures utilities made in 2017 and would be the largest year-over-year increase since 2012.

Capital spending projections for 2019 increased 10% from our October 2017 analysis, rising to $112.9 billion for the year from $102.3 billion, as companies’ plans for future projects solidified and new opportunities arose. Our latest report provides a new capital expenditure forecast of $99.2 billion for 2020.

The nation’s electric and gas utilities are investing in infrastructure to upgrade aging transmission and distribution systems, build new natural gas, solar and wind generation and implement new technologies. We expect considerable levels of spending to serve as the basis for solid profit expansion for the foreseeable future.

Although our data indicates that CapEx in the industry may fall in 2019 and 2020, considering our observations of recent years, actual investment will likely continue to rise or remain high. We note several utilities have not yet disclosed 2019 or 2020 spending forecasts. Considerable motivations exist for spending to remain elevated, including pent-up demand to replace and modernize aging infrastructure resulting from decades of under-investment in the electric transmission grid. The increase in renewable generation sources, which are often considerable distances from load centers, will continue to drive new transmission line projects.

The federal tax code changes that took effect at the start of 2018 preserved a provision strongly supported by the industry to encourage investment: the deductibility of interest expense for regulated utilities. Being among the most capital-intensive industries, utilities would have had a much higher cost of capital absent this provision, impacting capital investment planning and likely leading to higher utility bills. 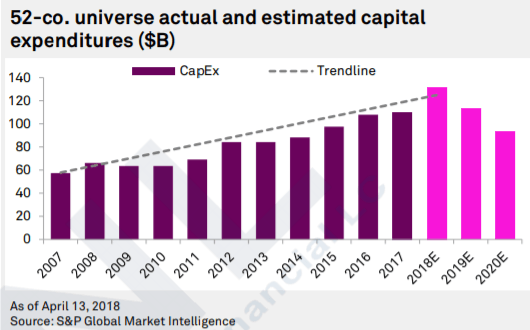 Based on our analysis spending on renewables is expected to total more than $8 billion across our coverage universe in 2018, up from utilities’ October 2017 forecast of almost $5 billion. And renewables CapEx is expected to surge 37% higher in 2019. Together with investment and production tax credits, the falling cost of solar photovoltaic and wind turbine technology has prompted utilities to consider the addition of renewable energy. Ownership of renewable energy facilities can also serve as incremental revenue streams for utilities with merchant arms, with commercial and industrial entities eager to purchase renewable energy to meet ambitious clean energy goals. Though federal environmental laws and regulations have come under scrutiny in recent months, we expect utility investments in renewable energy, including wind and solar, to remain robust in the coming years against a backdrop of supportive state and regulatory policy. Read our report on renewables CapEx here.

A rising interest rate environment and sweeping corporate tax cuts enacted in 2018 are major factors encouraging utilities to pull forward large capital projects to secure financing ahead of higher expected interest rates and take advantage of interest deductibility. Additionally, tax reform, which lowered the corporate tax rate to 21% from 35%, is effectively reducing ratepayer bills nationwide, offering utilities headroom to step up capital investments and seek Their recovery in rate base.

Not subscribed? Contact us to tour the platform and our workflow solutions.

Talk to an Expert