Valuations across the energy and water utility sectors improved on a stock price-to-earnings plus growth basis, led by the multi-utility group's average 32% rise since our March 24 valuation analysis. However, the S&P 500 Utilities next-12-months, or NTM, P/E fell below the S&P 500's NTM P/E for the first time this year in early April with broad markets rising during the month's first trading weeks. Since March 20, the S&P 500's NTM has improved by nearly 37% to 19.4x, versus the S&P 500 Utilities' 19% increase to approximately 18.9x. 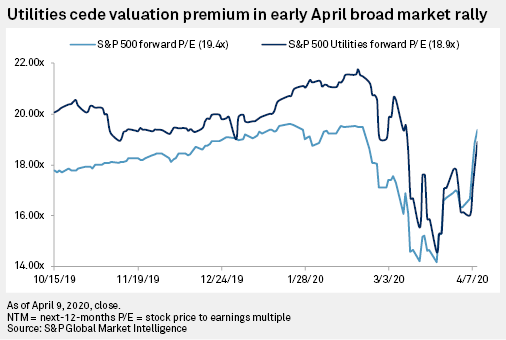 CenterPoint Energy Inc., one of the more volatile multi-utility stocks in recent weeks owing to recent management changes and exposure to a collapsing oil market through its Enable Midstream Partners ownership stake, saw its NTM P/E rise 46% to 13.1x since March 20, with the stock rising 32.5% last week, possibly on M&A speculation. Recent moves by management to shore up the company's cash flow position may have also fueled share price appreciation, with the stock generally on an upward trend since the company announced a 48% quarterly dividend reduction, a $300 million deferral of utility capex planned for 2020, and an additional $40 million of operations and maintenance expense reductions.

Public Service Enterprise Group Inc. bested the multi-utility group's average rise with a 40.7% increase to 15.7x, while Dominion Energy Inc. lagged the group with a 22% rise to 18.7x.

Elsewhere, gas utility NTM P/Es rose 23.5% on average since March 20, led by small-cap utilities Southwest Gas Holdings Inc., up 51% after shares rose more than 7% in March following several consecutive months of underperformance, and ONE Gas Inc. with a 34% rise in its NTM P/E. Smaller-cap companies generally have lower trading liquidity and therefore, all other things being equal, tend to have more significant share price swings than larger-cap equities. The gas utility group has slightly underperformed its multi- and electric utility counterparts year-to-date through April 9, spurred in part by a broader COVID-19-driven sell-off in February.

The quadrant chart below shows how the Regulatory Research Associates' utility universe looks when comparing the P/E ratio and the estimated long-term earnings growth rate. RRA is a group within S&P Global Market Intelligence. Since our most recent valuation analysis March 20, utility NTM P/Es, particularly within the electric subgroup, have migrated from the upper left quadrant to the upper right, where water utilities and large-cap NextEra Energy Inc. remain due to above-average EPS outlooks. Notably, long-term EPS outlooks for the four utility sub-groups are modestly changed since early March, suggesting swings in the stock market and changes in individual company circumstances that have impacted stock prices have been the primary driver of NTM P/E valuations in recent weeks.

As previously stated, we expect further utility developments and disclosures related to the coronavirus during the first-quarter earnings season that could prompt analyst revisions to EPS estimates, thereby affecting utility stock valuations. Challenges, including rising unemployment and expected reductions in energy usage as businesses, schools and government facilities shutter, have the potential to significantly impact the utilities' financial performance; however, given the relatively essential nature of utility services and the economically regulated nature of their businesses, we envision that this sector will be among those that ultimately fare comparatively better in a coronavirus-driven economic scenario.

Through April 9, the S&P 500 Utilities was down just under 6% year-to-date versus the S&P 500's approximately 14% decline, compared with the indexes' 27% and 29% year-to-date declines through March 20. From an earnings perspective, the S&P Global Market Intelligence consensus estimates predict average EPS growth of 4.5% in 2020 versus 2019's results across all utility sectors, when excluding outliers CenterPoint and PG&E Corp., which are estimated to see 24% and 30% year-over-year EPS declines in 2020. By sector, average gas utility EPS is expected to rise 8.5%, followed by water utilities at 4.8%, and electric and multi-utilities at 3.4% growth. 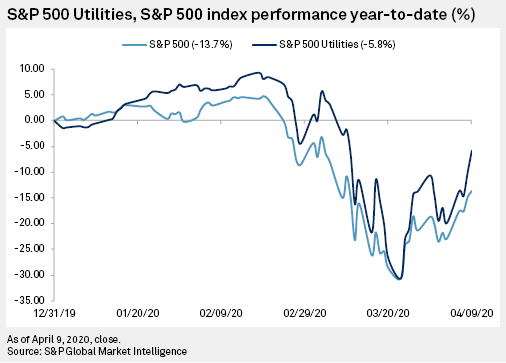