US multichannel pinched by cord cutting in 2025 outlook


US multichannel pinched by cord cutting in 2025 outlook

Video cord cutting is expected to strip nearly $33.6 billion in annual revenue from traditional U.S. multichannel services in the five-year outlook. The impact of the migration of consumers from big subscription services, according to Kagan's latest forecast for cable, direct broadcast satellite and telco multichannel revenue, is charting a course for sales to dip from $91.1 billion in 2021 to $64.7 billion by 2025.

Changing viewing patterns, only slightly moderated by rising average revenue per unit, are forecast to depress sales excluding advertising by 45% from the estimated 2016 annual peak of more than $116.9 billion.

While all three major platforms are feeling the impact from the shift, the magnitude of the losses are expected to hit more acutely for DBS and telco revenue subtotals amid waning commitments by major players and relative stability from the large cable providers. 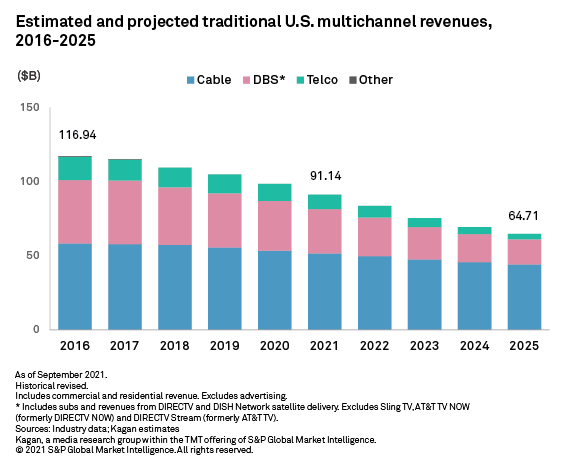