Growth for free ad-supported TV, or FAST, services in the U.S. shows no signs of slowing as audiences, advertisers and content owners lean into the FAST model. We estimate that total FAST ad revenues in the U.S. could approach $4 billion in 2022, with that total projected to more than double to just under $9 billion by 2026.

Paramount's purchase of Pluto TV in 2019 and Fox's 2020 acquisition of Tubi helped bring the FAST model to the masses and kickstarted a land-grab that has network owners, tech companies, multichannel TV distributors, broadcasters and TV manufacturers operating FAST services and fighting for their share of the rapidly growing revenue pie. FAST services rely heavily on older film and TV programming and third-party content, dramatically lowering the cost of entry and expense required to operate a service.

Despite usage and revenues soaring in recent years, significant upside remains for the FAST market. We estimate that U.S. TV households will view an average of 0.9 FAST services per household in 2022, with that number rising to 1.5 FAST services/TV household by 2026. 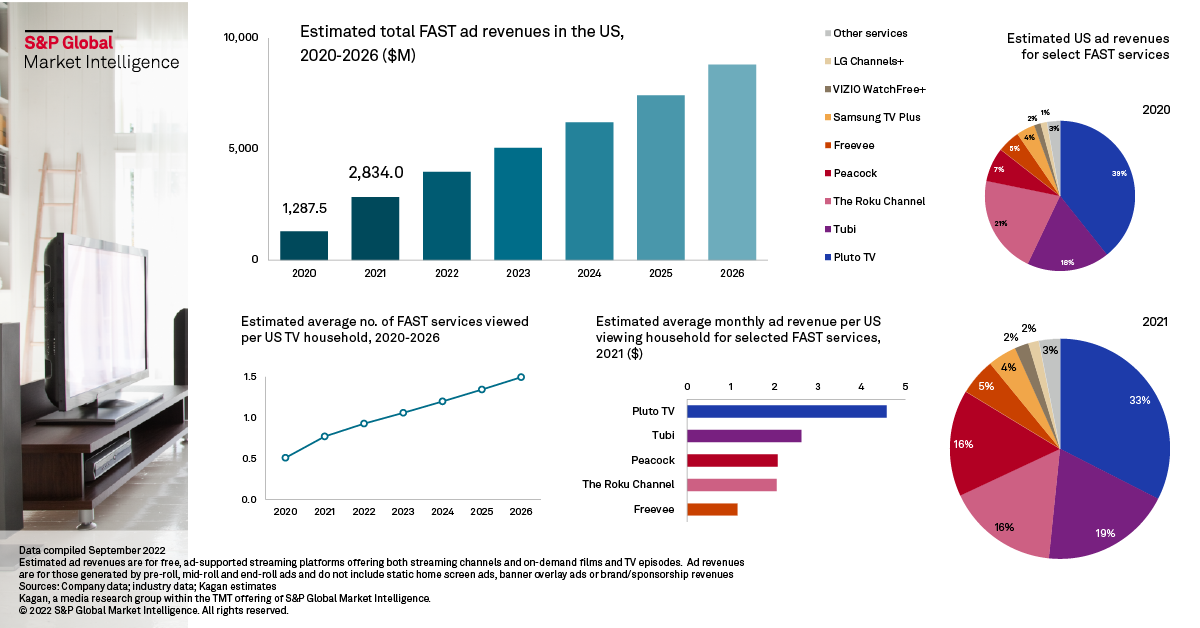 Kagan's U.S. Consumer Insights surveys of about 2,500 online adults conducted 2022 highlight the rapid gains in usage for many FAST platforms. First-quarter survey results from 2018 to 2022 show Tubi and Pluto TV were used by just 3% to 4% of U.S. internet households in 2018, with that share soaring to about 20% for each service by 2022. Five different FAST services — Pluto TV, Peacock, The Roku Channel, Tubi and Freevee — were used by about 15% to 20% of U.S. online households in the first quarter of 2022 while a host of other services were in the 4% to 8% range. 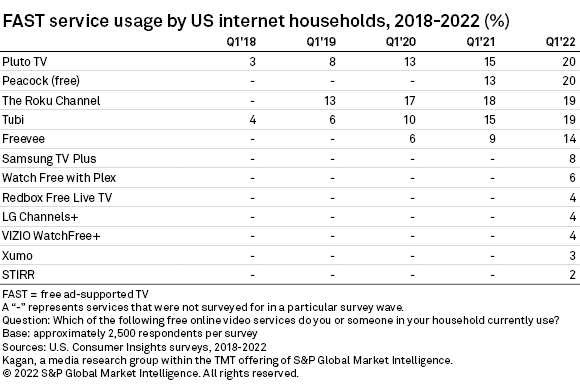 Survey respondents in the third quarter of 2021 were first asked if they used selected FAST services and if so, did they primarily watch streaming channels, on-demand content, or a mix of both channels and on-demand programming. Users of major services consistently reported similar behaviors, with about 45% to 50% of viewers of each service reporting that they watched a mix of channels and on-demand content. Viewers at Tubi and Peacock were the most likely to only watch on-demand programming at 35% each while Pluto TV users were the most likely to just watch streaming channels at 23%.

Viewers that watch content via streaming channels may spend more total watch time with a service (and generate more ad impressions and ad revenue) versus viewers that just dip in for select on-demand programs. 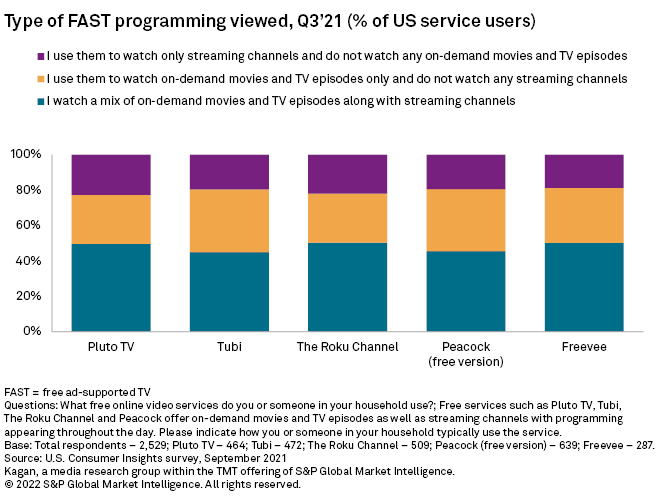 FAST platforms have rapidly added channels in 2021 and 2022, pushing totals at some services past the 300-channel mark as of June 2022. Entertainment channels still make up the majority of channels at most services, but news and sports-focused channels have grown as operators look to supplement core programming of films and TV series. Many channels are distributed across multiple FAST services, with the number of channels that are exclusive to each platform typically a small fraction of the available total.

Some operators such as Pluto TV and Xumo not only offer their own stand-alone FAST services but also have partnership deals with other platforms to provide channels and programming. While some linear TV networks have corresponding FAST channels such as CNN and Hallmark Movies & More, most FAST channels are more narrowly focused on specific genres ("Classic Movies," "Pluto Drama" and "Xumo Documentaries") as well as individual series and shows such as "Baywatch," "COPS" and "The Bob Ross Channel." 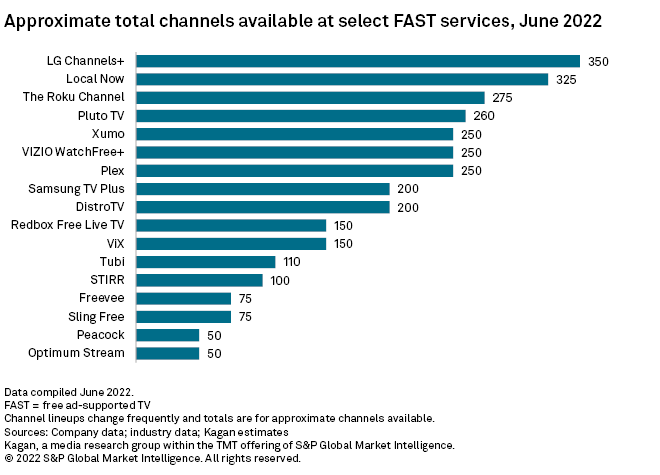 Most FAST operators have prioritized keeping ad loads in check as they look to grow their audience reach and avoid a linear TV experience that can include 10 minutes or more of ads per hour of viewing. Ad loads vary by FAST service but are typically in the range of four minutes to eight minutes of ads per hour. Respondents in the first-quarter 2022 survey that used major FAST services largely reported feeling that ad loads were reasonable, ranging from 84% of The Roku Channel users in the "reasonable" ad load camp to 77% of Pluto TV viewers. 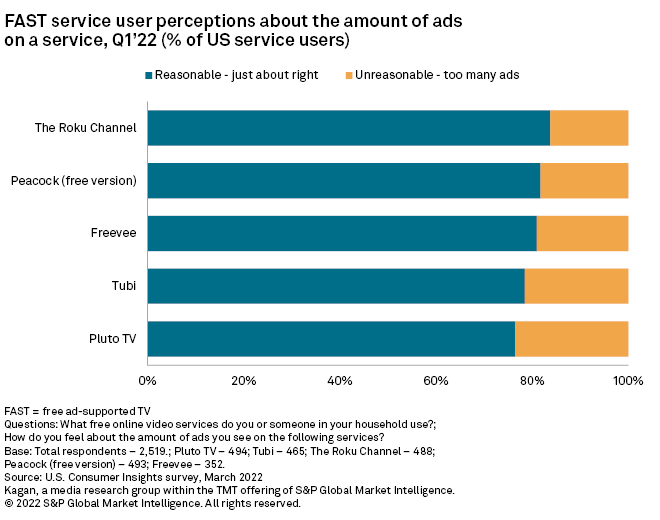