Tech in Banking: An Age of Digital Disruption

The outlook for community bank returns is far more favorable now than even a few months ago as credit costs should be significantly lower than previously expected. Few banks have reported material increases in problem loans through the first quarter as efforts to soften the economic blow of COVID-19 kept many borrowers afloat. Economic conditions are expected to improve further, with more local economies planning to reopen in the not-too-distant future. Still, relief efforts have left many institutions' balance sheets sodden with excess liquidity. That trend is unlikely to abate soon, leaving net interest margins below historical levels for the foreseeable future, according to S&P Global Market Intelligence's annual U.S. Community Bank Market Report.

S&P Global Market Intelligence projects that the community bank group’s aggregate earnings will fall 12.6% in 2021 as provisions for loan losses rise nearly 50% from year-ago levels. But the outlook is now much more favorable than earlier this year. In January, S&P Global Market Intelligence projected that community bank earnings could fall as much as 41% in 2021.

As vaccine distribution has increased, more states are planning to reopen their economies, which ultimately should help cure a number of distressed loans. California Gov. Gavin Newsom, for instance, said April 6 that the state will reopen its economy and lift most COVID-19 restrictions by June 15 provided that vaccine supply and hospitalization rates remain stable.

Even with most U.S. economies operating under some restrictions related to the pandemic during 2020, credit quality trends at community banks were fairly stable. The U.S. government's efforts to ward off the economic blow of the coronavirus and forbearance offered by banks helped keep credit costs from rising notably. As relatively few losses materialized in 2020, community banks did not increase reserves as much as previously expected. Further reserve increases will be required to absorb rising charge-offs, but the required reserve build will serve as only a modest headwind to earnings, particularly when compared to expectations a few months ago. 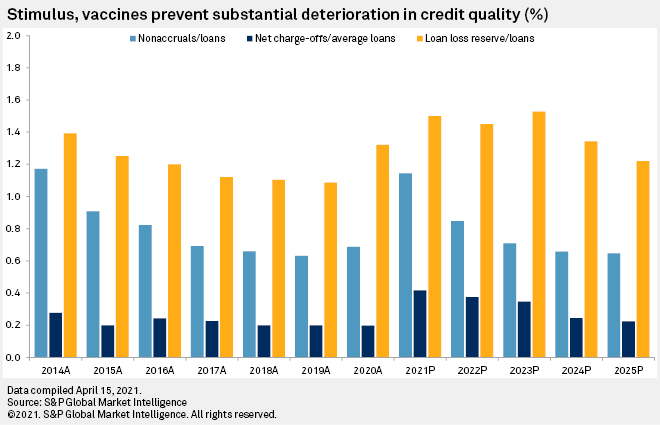 Despite an improving outlook for the U.S. economy, loan growth will remain hard to come by while deposits continue to move into the banking system. This dynamic will keep pressure on net interest margins even as long-term interest rates have returned to pre-pandemic levels and are expected to rise further.

"[W]e have seen remarkable hoarding of cash by small business, very little loan demand, which is just completely out of line with the character of the economic numbers that are being thrown around and the broader discussion of the economy. It is quite surprising," Adams said April 22 on a conference call to discuss first-quarter earnings.

A number of banks expect commercial customers to eventually invest their cash once they work through forgiveness of loans made through the Paycheck Protection Program and become more comfortable with the state of the economy. Seacoast Banking Corp. of Florida President and CEO Charles Shaffer said on the company's first-quarter earnings call that they expect commercial customers to begin investing later in 2021.

"I think they have to. I think it's pent up, and they've been waiting for, like I said, to work through forgiveness as well as some clarity on the economic recovery and the impact of the pandemic," Shaffer said on the call.

A slightly different assessment came from a much larger bank. Fifth Third Bancorp CFO James Leonard said on the company's first-quarter earnings call that they expect commercial customers to remain conservative and hold a "little bit [of] extra liquidity" over a period of years. However, he noted that excess liquidity in consumer accounts should wane in the second half of 2021 as consumer spending increases. 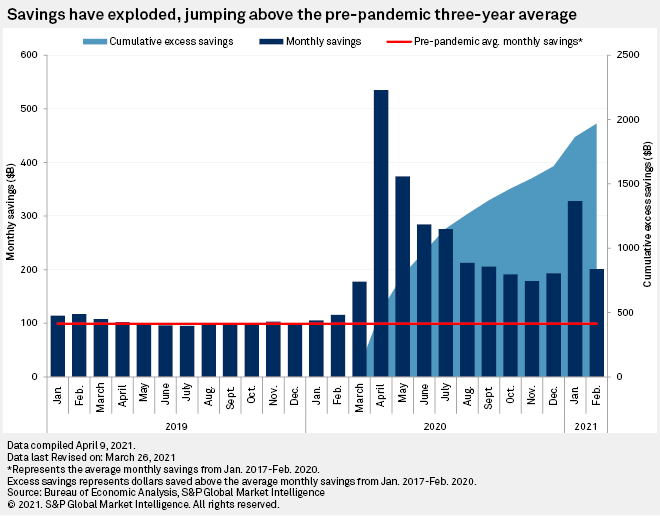 Consumers have recorded near-record savings rates over the last year, accumulating nearly $2 trillion in excess savings. We arrived at that figure by assuming every dollar over the monthly average savings between January 2017 and February 2021 was excess.

The savings rate spiked again early this year, exceeding 20% in January due to the passage of $900 billion in stimulus in December 2020. The $1.9 trillion stimulus package that was signed into law in early March 2021 likely will support further deposit growth in the near term. But the distribution of vaccines should allow economies to reopen, which in turn should cause consumer spending to increase.

S&P Global Market Intelligence expects loans to grow 3% in 2021 as economic activity resumes in the second half of 2020. Deposit growth should outpace loan growth but could wane from the elevated pace seen in the first few months of 2021 as consumers put excess savings to work.

The flood of deposits has allowed banks to offset some of the pressure on earning-asset yields by lowering deposit costs. That trend should continue, albeit at a slower pace as the cost of interest-bearing deposits has nearly reached historically low levels.

That dynamic should prevent margins from returning to pre-pandemic levels over the next few years.

S&P Global Market Intelligence analyzed nearly 10,000 banking subsidiaries, covering the core U.S. banking industry through 2020. The analysis includes all commercial and savings banks and savings and loan associations, including historical institutions, as long as they were still considered current at the end of a given quarter. It excludes several hundred institutions that hold bank charters but do not principally engage in banking activities, among them industrial banks, nondepository trusts and cooperative banks.

The analysis detailed here focuses on institutions with less than $10 billion in assets to give a clear picture of the operating environment for community banks. We looked back more than a decade to help inform projected results for the banking industry by examining long-term performance over periods outside the peak of the asset bubble from 2006 to 2007. S&P Global Market Intelligence has created a model that projects the balance sheet and income statement of the entire industry and allows for different growth assumptions from one year to the next. 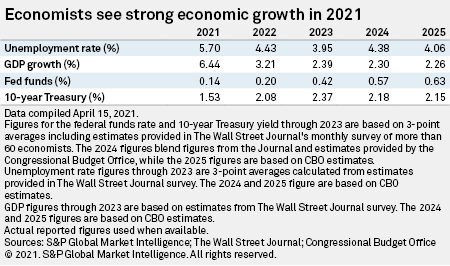