The recently concluded Auction 107 (C-Band) in the U.S. raked in over $81.11 billion or 94 cents per MHz/pop, shattering records for being the most expensive mid-band 5G spectrum auction locally and worldwide.

Mobile industry experts worldwide have long advocated for a multi-band spectrum strategy for 5G deployment, ranging from traditional low- and mid-frequency bands to relatively newer high-capacity, high-frequency bands often called millimeter wave. Most pioneer 5G markets focused on mid-band spectrum, particularly the 3.5 GHz band, due to its good balance between coverage and capacity, but the U.S. took a different route and invested heavily in mmWave spectrum.

The U.S.'s insistence on using mmWave spectrum for 5G has left it isolated from the rest of the world, especially after 5G pioneers China, Europe and South Korea championed the use of mid-band spectrum.

The Federal Communications Commission and U.S. operators, however, seemed to have already warmed up to the idea of using mid-band spectrum after Auction 107 generated intense bidding and high prices.

"This auction reflects a shift in our nation's approach to 5G toward mid-band spectrum that can support fast, reliable and ubiquitous service that is competitive with our global peers," said Acting FCC Chairwoman Jessica Rosenworcel on Feb. 24, hinting at the geopolitical significance of the auction.

Mid-band spectrum (between 1 GHz and 6 GHz)

Earning a total of $81.11 billion, Auction 107 is also the largest auction ever in the U.S. Verizon Communications Inc.'s Cellco Partnership was the biggest spender, shelling out $45.45 billion, followed by AT&T Inc. spending $23.41 billion and T-Mobile US Inc. spending $9.34 billion.

The importance of this auction is underscored by the fact that Verizon and AT&T had to take on significant debt for their bids. Aside from the desire to join the global mid-band 5G trend, low interest rates from the Federal Reserve's expansionary monetary policy in response to the ongoing pandemic-induced recession could have encouraged bidders to spend more. 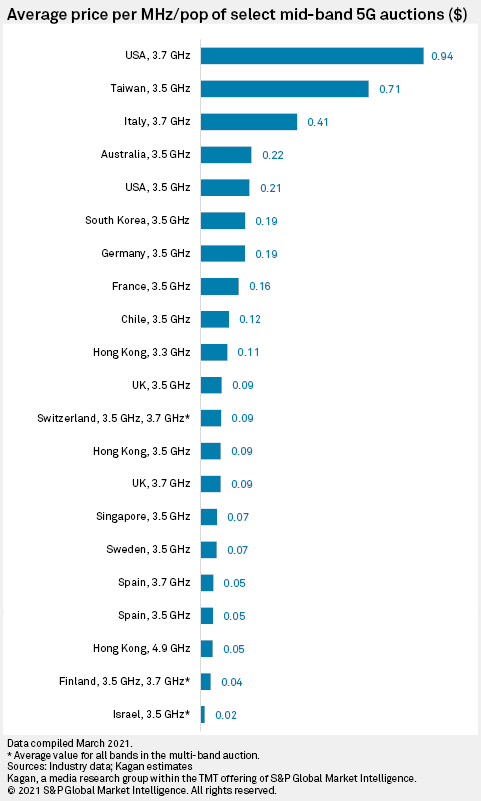 The adoption of Dynamic Spectrum Sharing, or DSS, as a band-aid solution to canceled 5G auctions due to the pandemic also heightened interest in mid-band spectrum. The Netherlands, for example, tagged the 1.4 GHz and 2.1 GHz auction in July 2020 for 5G but local operators still look forward to using 3.5 GHz since it is the European standard band.

Interest in mmWave 5G spectrum remains thin compared to mid-band in the past year. In fact, several markets have opted to cancel mmWave auctions or simply award mmWave licenses for free due to little interest from operators, such as Brazil, Chile, Cyprus, Hong Kong, Poland and Russia. 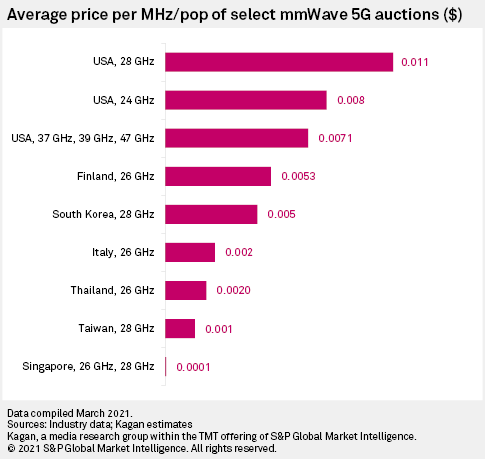 Although mmWave spectrum could deliver ultrafast 5G throughput, its deployment entails the use of densely packed small cells, which is quite costly. For instance, South Korea auctioned 28 GHz spectrum way back in June 2018, yet operators only turned on their mmWave 5G network in December 2020, mainly due to concerns with power consumption. China, the world's largest 5G market, also has similar concerns and has not yet adopted mmWave 5G.

In our opinion, several prerequisites have to be established first before mmWave 5G becomes widespread, namely: high demand for mmWave-specific use cases, cost-effective deployment solutions and a mature global equipment and device ecosystem.

There was not much activity for low-band 5G spectrum due to canceled auctions last year. 700 MHz is still the most popular band due to its flexibility for use in both 5G and 4G. New additions since our last update include the Netherlands in July 2020, Chile in February 2021 and the United Kingdom in March 2021. Israel also auctioned 700 MHz in its multi-band auction in August 2020.

India tried to sell the 700 MHz in its multi-band 4G auction in March 2021, but operators placed no bids due to the expensive reserve price. This is the second time the 700 MHz went unsold in India. 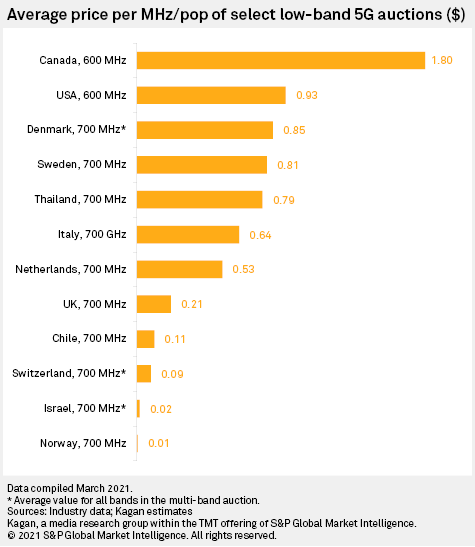