The Japanese automotive industry is set for an extended period if supply disruptions. The extended Showa, Imperial coronation and golden week combination of holidays from Apr. 30 through May 6 will lead to factory closures with a knock-on to exports in the following two weeks.

The industry is also awaiting a decision from President Donald Trump regarding the section 232 review of the automotive industry. While a decision is technically due by May 18, the implementation could be extended by up to 180 days in the event that the President carries out negotiations with countries that would be afflicted by tariffs, Inside Trade reports.

The latter condition may be satisfied by ongoing negotiations with the Japanese government towards a wider trade deal. A meeting between President Trump and Prime Minister Shinzo Abe on Apr. 26 raised the prospect of a rapid deal, Reuters reports, though the two sides have differing positions on both agriculture and the autos industry as discussed in Panjiva's research of Apr. 12.

The timing of negotiations may also prove controversial given the Japanese government may want to stall discussions until after the parliamentary elections in July, according to Nikkei.

Panjiva's analysis of production and export data from the big seven automakers shows export growth has already been lackluster recently. Exports from Japan fell 1.9% year over year in March, following an increase of just 0.1% year over year in the prior three months.

The worst performers in March were Honda - whose exports fell 38.5% for the month after an earlier surge - and Mitsubishi with a 29.5% slump. Indeed, only Toyota saw an expansion in exports in March with an increase of 13.8% reversing an earlier decline. 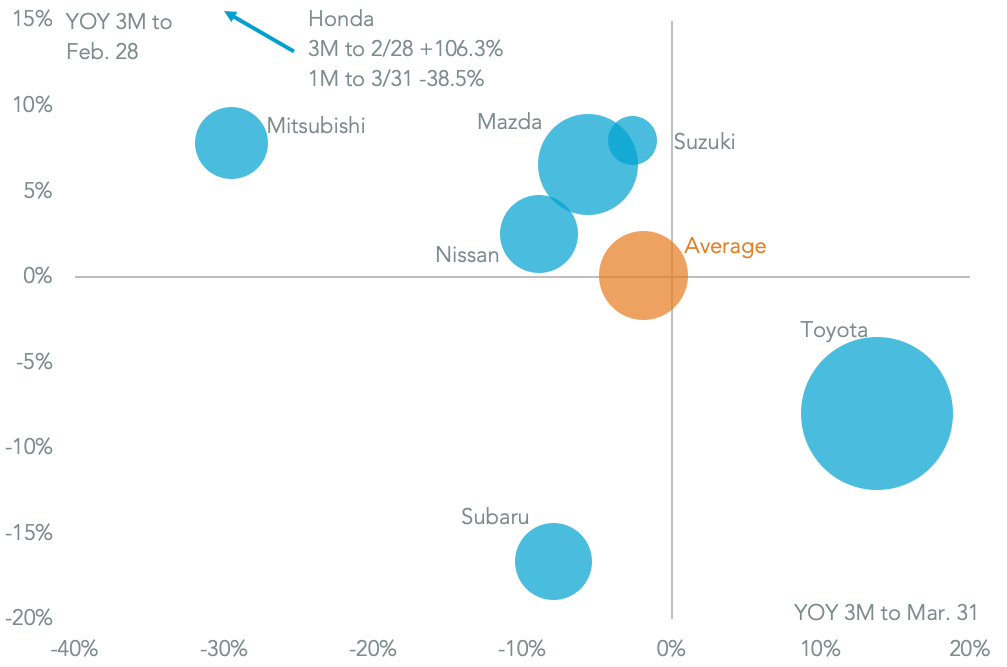 Chart segments exports of cars and light trucks from Japan by automaker. Bubble size indicates total exports during the 12 months to Mar. 31. Calculations based on company financial filings. Source: Panjiva

Panjiva data shows that Toyota's likely started to reprioritize the U.S. with seaborne shipments having risen by 6.5% year over year in March after a 24.0% drop in the prior three months. The fastest expansion among the majors has been Nissan with an 85.7% surge in March. Honda and Mitsubishi have both cutting U.S. shipments with a 10.1% and 20.0% reduction respectively. 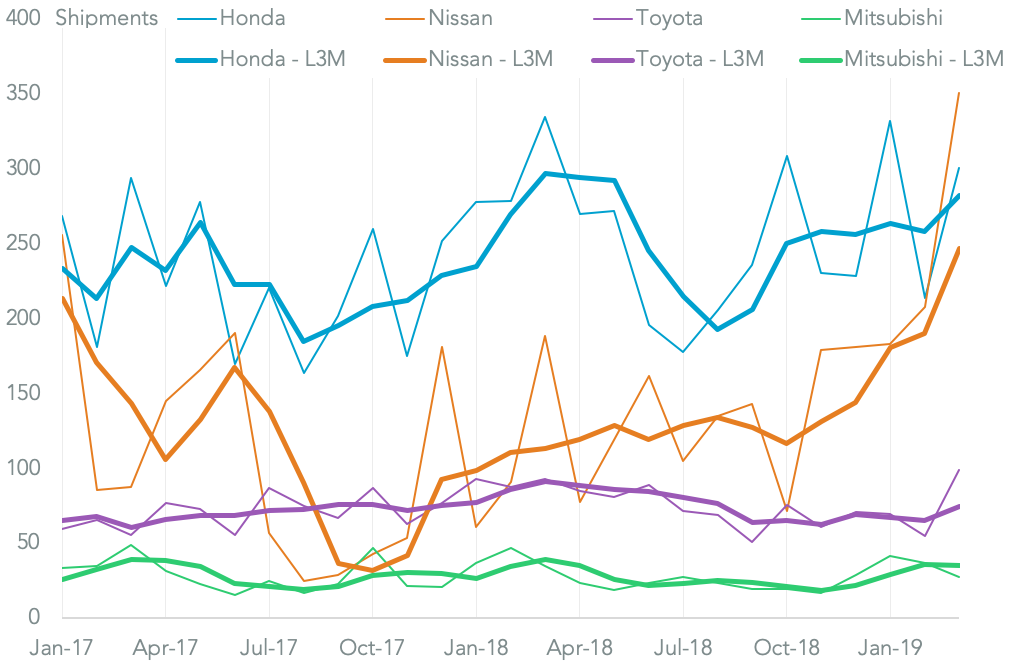 Chart segments U.S. seaborne imports of cars and light trucks from Japan by manufacturer on a monthly and three-month average basis. Source: Panjiva