COVID-19 continues to adversely affect economies globally. With the full extent of its impact still uncertain, we reached out to the PE community to learn more about their perspectives on the impact of the pandemic on PE markets in their respective regions.[1]

The survey results showed that the pandemic has had, and will continue to have, serious repercussions on PE activity, but the sentiment of PE players varies significantly across regions. 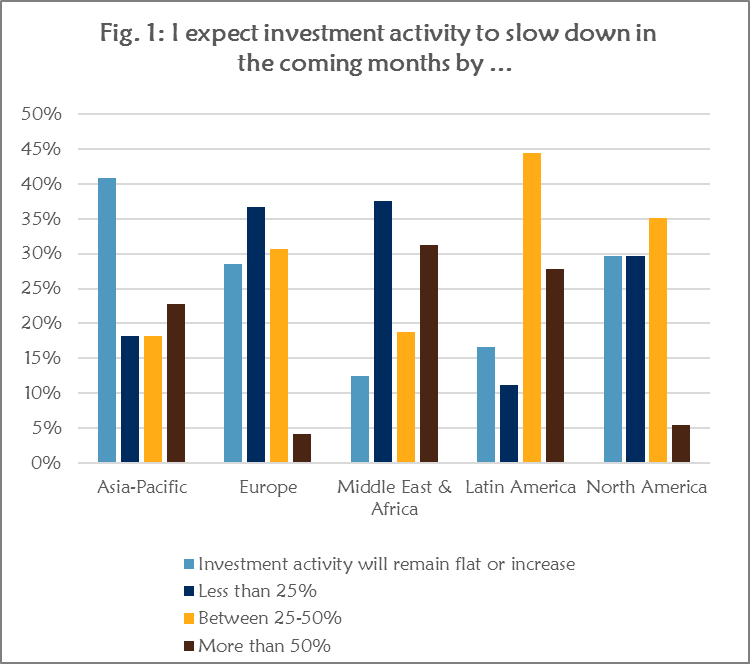 Out of all respondents to our survey, only 27% expect investment activity in the coming months to remain flat or increase. Relative to other regions, APAC investors appear to be the most optimistic, with 40% anticipating a positive outlook amidst the ongoing COVID-19 developments. This relative optimism is perhaps not surprising given that China and East Asia were first in and first out of the pandemic; their regional economies are further along the recovery path and have even seen an uptick in investment activities. According to S&P Global Market Intelligence data, PE and VC entry value in the APAC region rose by 31%, from $23.7bn in the first three months of the year to $31.2bn in the second quarter. At the same time, however, the situation in other core Asian markets, such as India, remains precarious, a difference which likely accounts for the 22% of respondents from the territory who predicted a slowdown in investment activity of more than 50%.

On the opposite site of the spectrum are investors in the Middle East & Africa (MEA) region, 88% of whom anticipate a significant slowdown in deal-making activity in the second half of 2020. Similarly, 83% of Latin American (LatAm) Investors also expect a downturn in deal-making activity in the near future. Given the devastating effects of COVID-19 on emerging economies, it is not surprising that both these regions also have the largest number of GPs across the globe (31% and 27%, respectively) predicting a decline in investment activity of more than 50%.

European and North American investors are broadly aligned in their expectations for the near-term investment landscape. More than two thirds of respondents from both regions (70%) expect investment activity to decrease in the coming months. Minor differences are mainly reflected in the degree to which respondents believe that deal-making activity will taper off. North American investors are leaning toward a more cautious outlook, with 35% of respondents reporting that they expect a decline of between 25-50%, as opposed to only 31% of European respondents sharing the same view.

That said, European PE deal-making dropped to a five-year low in the first half of 2020, a 13% drop across the same period the year before. The fall for US entries was even steeper, with a 26% year-over-year drop in deals announced (from 3168 in the first six month of 2019 to 2339 in the comparable period in the current year).[2] In line with 2019 trends, IT was the most resilient sector across both the US and Europe. Not surprisingly, Healthcare was the second most invested industry, as demand for services increased amid the COVID-19 fallout.[3]

At the onset of the pandemic, the immediate focus was to stabilize existing portfolios. Now PE players are turning their attention back to sourcing and executing new investment opportunities. The majority of survey respondents (58.5%) expect to make selective new investments, likely in order to take advantage of low-asset valuations in certain sectors. Less than a quarter (22%) still plan to focus on addressing the short-term needs of their portfolios, with the exception of LatAm respondents, where this number is as high as 40%. Fundraising still remains on the agenda, particularly for investors in Europe and North America, with 12% and 11% of respondents, respectively, indicating that fundraising will continue to be top of mind. Yet for the remaining regions, fundraising activities were brought to a standstill, in stark contrast to the expectations of the GPs who took part in our annual survey on the outlook for the year ahead at the end of 2019.[4] 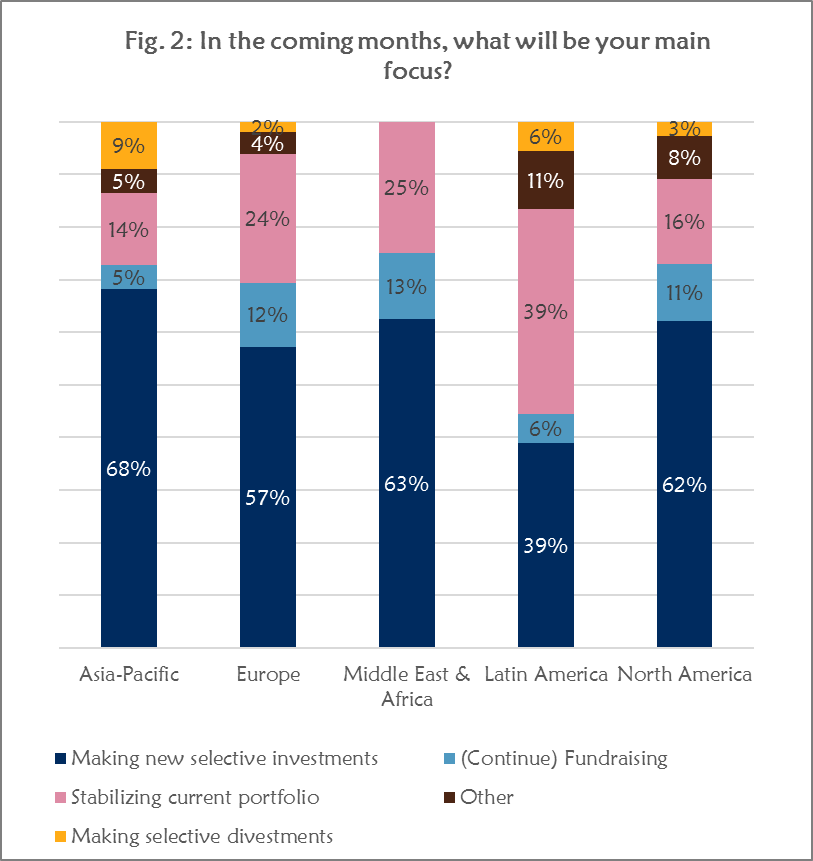 The overwhelming majority of respondents and their respective PE firms (76%) do not plan to deploy any new strategies over the next six months in response to the COVID-19 disruption. For those who are likely to pivot their strategies, distressed assets and special situations represent appealing targets.

When asked about the biggest challenge faced at the portfolio company level during the pandemic, respondents cited liquidity and finance concerns (40%), followed by the impact on workforce (21%), and supply chain and other operational disruptions (17%). For LatAm investors, inadequate response from local governments was ranked second, after the liquidity concerns. This ranking is likely reflective of the struggle within the region to strike the balance between containing the spread of the virus and the pressure to open economies, which has resulted in longer, more unpredictable and more damaging lockdown restrictions. 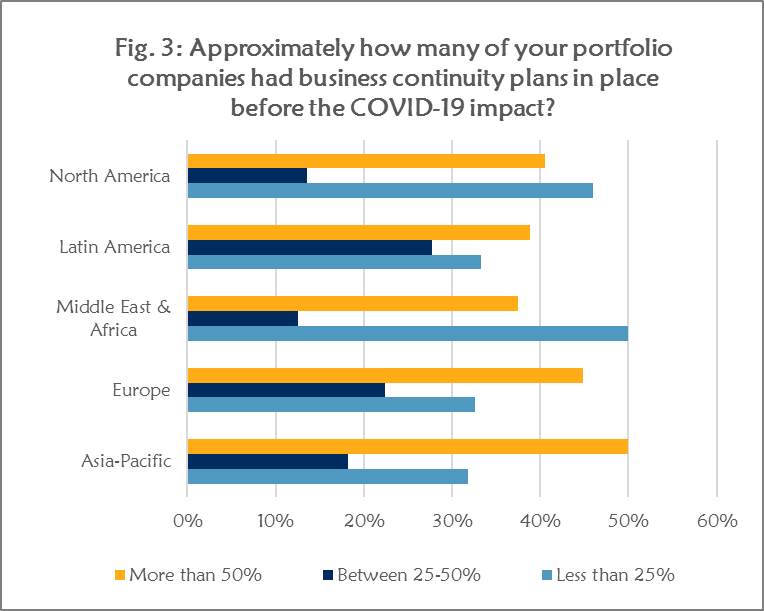 On average, 40% of participants indicated that more than half of their portfolio companies had business continuity plans in place before the outbreak of COVID-19, with APAC respondents reporting the highest percentage (50%). This might be a result of the region’s previous experience battling local epidemics. Companies in the MEA region – and also, strikingly, North American-based portfolio companies, were the least prepared for serious business disruptions. Half of all respondents from the MEA region and 46% of North America said that less than 25% of their portfolios had business contingency plans ready. 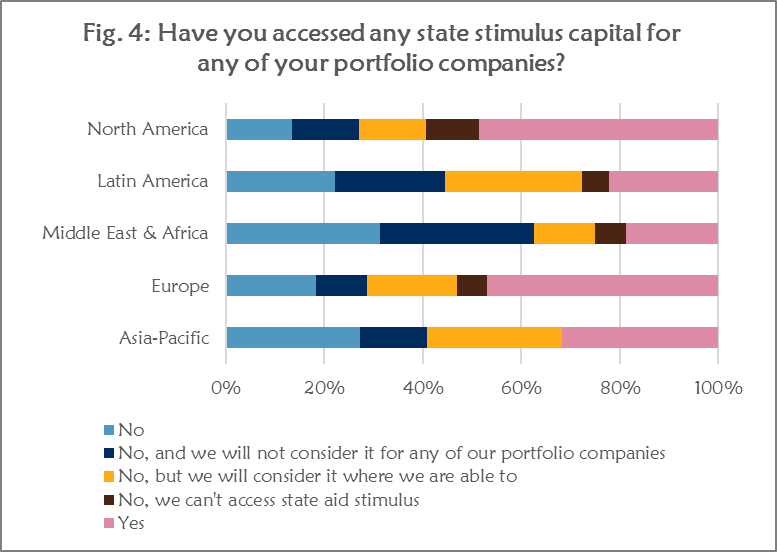 Overall, PE firms across the globe (80%) feel confident that they have enough liquidity to support the majority of their portfolio companies in the coming months. The outlier is the LatAm region, where the confidence level stands at only 55%. Moreover, the survey results indicate that, despite initial concerns and restrictions for tapping into state aid programs, nearly half of PE players from Europe and North America have already successfully accessed state aid funds to support their existing portfolios.

In Europe alone, a total of 58 “wide in scope” state aid schemes have been approved by the European Commission under its Temporary Framework as of April 2020, of which many were made available to small and medium–sized  PE-backed businesses.[5]

COVID-19 has caused an unexpected shock to most, if not all, economies globally and the full extent of its impact is difficult to predict. Although the PE space has not remained unscathed, it has proven to be resilient during previous economic downturns. With PE players sitting on record amounts of dry powder, the current crisis undoubtedly provides an array of new investment opportunities. Add to this valuation corrections, and we are likely at the precipice of an increase in deal-making activity.

[4] Private Equity and Venture Capital Firms shared their Outlook for 2020. (As of 13/8/2020). S&P Global Market Intelligence. Retrieved from https://www.spglobal.com/marketintelligence/en/news-insights/research/private-equity-and-venture-capital-firms-shared-their-outlook-for-2020