The opposite is true for Enel, with most of its projects experiencing higher-than-average wind speeds in the third quarter, driving a 2.1% increase across its portfolio. Enel's 1,600-MW Kansas portfolio registered wind speeds up to 7% above average, while its 1,150-MW Oklahoma fleet was up 3.3%.

Wind speeds at Iberdrola's nearly 1,200-MW Texas portfolio varied negatively from the norm in the third quarter, ranging from about 1% at the 120-MW, KP-9015 Barton Chapel Wind down to 7% at the 380-MW, Karankawa Wind Project.

By contrast, Iberdrola has a bigger fleet in states with higher-than-average wind speeds, which includes Kansas, California, Illinois, Colorado, New York, Pennsylvania and Ohio. Approximately 3,800 MW of Iberdrola projects saw positive wind speed deviations in the third quarter, including 2.4% at its plant in California and 6.6% in its Blue Creek I & II Wind Farm (Paulding Wind) in Ohio. Market Intelligence second-quarter contract data shows the Blue Creek I&II Wind Farm has a long-term contract with Ohio State University Research Foundation, with a fixed transaction rate of $54.48/MWh.

More than half of Duke's wind capacity is in Texas, leading to its portfolio averaged wind speed deviation of 1.7% below normal. Most of Duke's projects outside the state experienced higher-than-average speeds, including North Allegheny Wind at 5.3% in Pennsylvania and Cimarron II Wind Plant at 4.7% in Kansas. Duke Energy Renewables Inc. owns 25.5% of Cimarron II Wind. Based on Market Intelligence data, the plant has a long-term contract with Evergy Metro Inc. with a fixed transaction rate of $31.50/MWh. 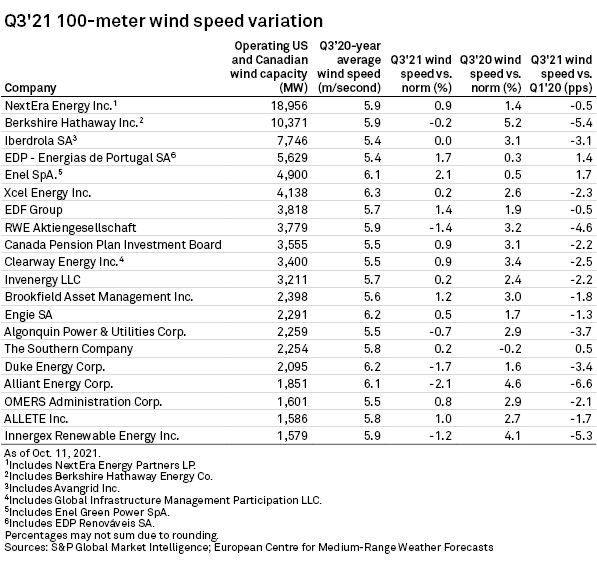 Innergex Renewable Energy Inc., with projects in Canada, Idaho and Texas, exhibited a portfolio-wide wind speed deviation of 1.2% below normal in the third quarter. The Dokie Wind Energy in British Columbia had wind speeds 10% above average in the quarter. According to Market Intelligence data, Innergex owns 25.5% of operating capacity at the plant. Wind speeds at the company's approximately 800-MW Texas wind portfolio decreased on average, while 86 MW of projects in Idaho were 1.8% above average. Innergex’s portfolio of approximately 700 MW in Quebec saw average wind speeds ranging from 3.4% below normal (Gros-Morne (Cartier Wind)) to 2.2% above average (Viger-Denonville Community Wind Farm).

Wind speeds were generally close to average for U.S. and Canada wind projects in the third quarter. Projects with wind speeds within 3% of the 20-year average accounted for about 87 GW of projects.

This article is a continuing series that analyzes quarterly average wind speeds in areas with operating wind projects. The third-quarter wind speed data for individual wind units is available here. The second-quarter report can be found here.