As would be expected, the subscription video-on-demand services that have been around the longest have the largest shares of long-term subscribers (over a year), according to data from Kagan's U.S. online consumer survey, conducted in March. Services like AT&T Inc.'s HBO Max and Paramount Global's Paramount+ have been around for a while, but both have a slightly smaller share of long-term subscribers, at 40% and 36%, respectively, than relative newcomer Apple Inc.'s Apple TV+ at 43%. HBO Max and Paramount+ have undergone extensive rebranding and have seen an uptick in users since the original services launched as HBO NOW and CBS All Access.

* Users of smaller services like Paramount+ and Peacock Premium tend to use more SVOD services on average, compared to users of the larger services, such as Netflix and Prime Video.

* For many of these services, recent subscribers (less than a year) were more likely to watch more broadcast than on-demand video.

Netflix Inc. and Walt Disney Co.'s Disney+ are planning to launch ad-supported subscription tiers, in part to better monetize users sharing passwords. The concern for password sharing is warranted given that among surveyed users of these services, Disney+ had the largest share of shared log-in users at 19%, followed by Netflix at 15%.

HBO Max had the largest share of users with free access/included with another subscription at 19%, followed by Peacock Premium at 16%. HBO Max is included as a perk for several different AT&T services. Comcast Corp.'s Peacock Premium is included with select Xfinity, Charter Communications Inc. and Cox Communications services. The share accessing Paramount+ as part of another subscription is expected to increase with the tie-up with Walmart Inc.'s Walmart+. 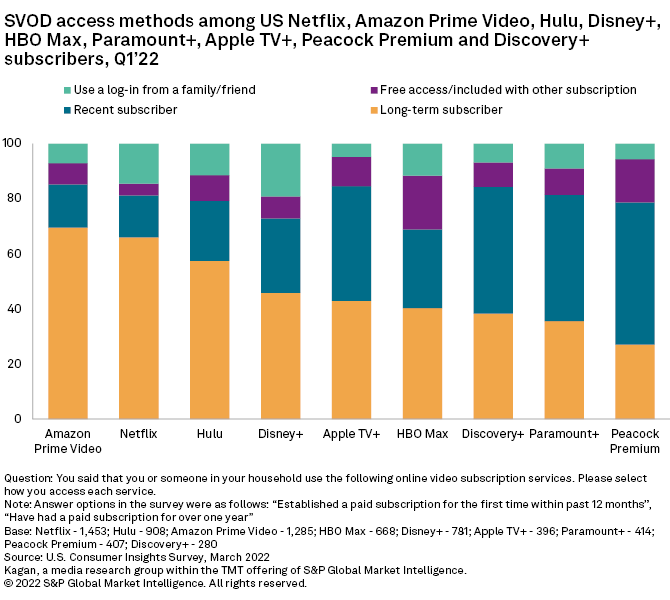 Examining the length of subscription trends among service users by generation shows that younger users tend to have larger shares of recent subscribers compared to older users. For example, 27% of Gen Z Netflix users were recent subscribers compared to 8% of boomers/seniors. Younger respondents were also more likely to indicate they used a shared log-in for these services. Again, with Netflix users as an example, 24% of Gen Z used a shared log-in compared to 13% of older generations.

Free access/included with other subscriptions among HBO Max users was more common among older respondents, with 32% of boomers/seniors accessing the service this way compared to 11% of Gen Z users. Similarly, 26% of boomer/senior users of Peacock Premium access the service this way compared to 12% of millennials. This is not the case for discovery+ where the largest share of free access users was among Gen Z users at 15%. 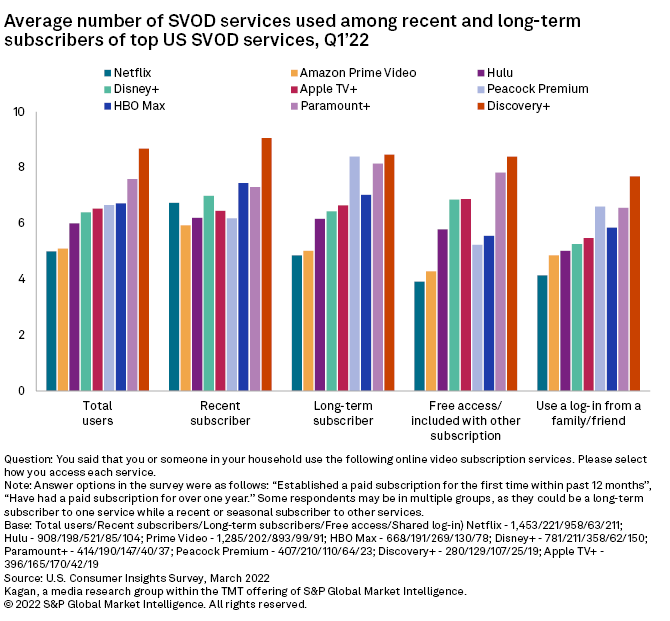 Data presented in this article and the associated Excel banner file was collected from Kagan's U.S. Consumer Insights survey conducted in March 2022. The surveys included 2,519 internet adults with a margin of error of +/- 1.9 percentage points at the 95% confidence level. Percentages are rounded to the nearest whole number. Gen Z are adults ages 18-24; millennials, 25-41; Gen X, 42-56; boomers/seniors 57+.